Preliminary figures from the Quarterly Census of Employment and Wages (QCEW), which Governor Walker has previously touted as more accurate than the establishment survey [1], indicate a substantial downward revision in Wisconsin private employment. 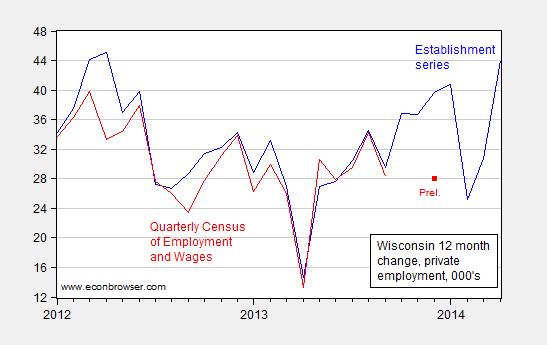 It is interesting to note that the preliminary QCEW figure is a full 11,700 less than the BLS establishment survey estimate. As the Governor’s administration has stressed [2] [3], the QCEW numbers are from a census, not a survey, and are hence much more accurate.

The QCEW figures are not seasonally adjusted, so a comparison with the establishment series in levels is a bit complicated. In order to draw out the implications, I use the 2001M01-2013M09 sample period to estimate the relationship between the two series: 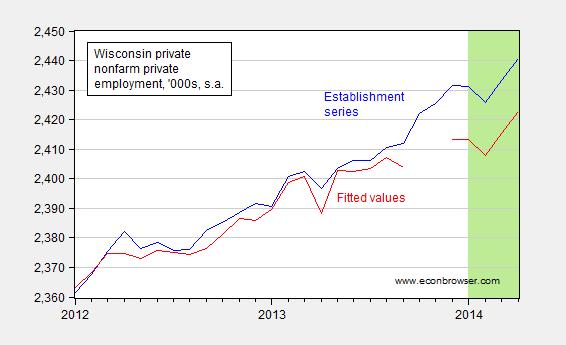 It is interesting to consider what this implies for Governor Walker’s promise to create a net new 250,000 jobs by January 2015, reiterated as recently as last November [4]. 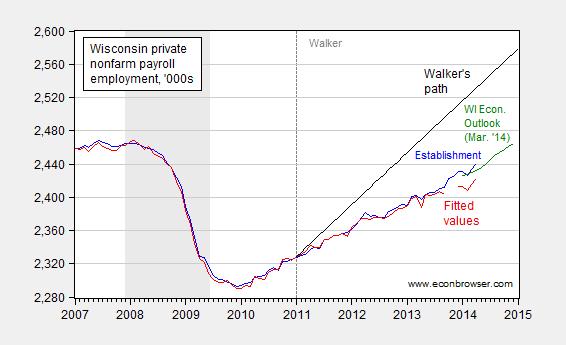 These calculations imply that, in order to attain the 250,000 new jobs goal, 22,078 jobs would have to be created each month, for the next 7 months (as opposed to 19,500 per month using the establishment series). Mean job creation has been 2,888/month, with standard deviation of 3,988, since January 2011. Even using the establishment series, the gap between the required monthly job creation rate and the average rate of job creation is 4.2 standard deviations. For 19,500 jobs to be created month after month for the next 7 months is therefore somewhat (!) unlikely.

10 thoughts on “Will Wisconsin Private Employment Be Revised Down?”