I’ve read several comments lauding the move toward a structural budget balance in Wisconsin under Governor Walker’s administration. I decided to take a look at what the actual evidence for a surplus is, and what the economic impact has been of policies purported to improve economic performance.

Figure 1 depicts the budget balance by fiscal year over the past decade and a half, plus projections from the Legislative Fiscal Bureau. 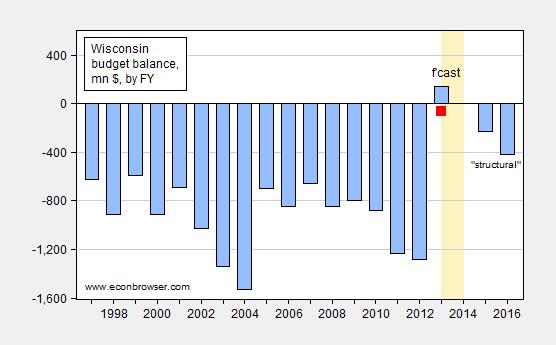 See this description of the Wisconsin budget process.

Recent actions have pushed the balances in the 2015-17 biennium into deficit.[0] But even the news for the 2013-15 biennium has turned dark. By June 2014, it was apparent that there were both tax revenue shortfalls and outlays in excess of planned [Peacock/WBP]. I’ve included an alternate projection for FY2013-14, shown as a red square in Figure 1. There are also some downside risks to the balance on the spending side (primarily Medicaid/Badgercare), which I have not included, so this is not the worst case scenario.

To some extent, the shortfall in revenues is not surprising. The administration has implemented a contractionary fiscal policy (cutting taxes [1], cutting spending to increase the budget balance which drives down output and hence revenues. The main tax cuts were:

My predictions of what would occur have been borne out in actual developments in aggregate economic activity. Wisconsin has experienced substantially slower growth than it otherwise would have. 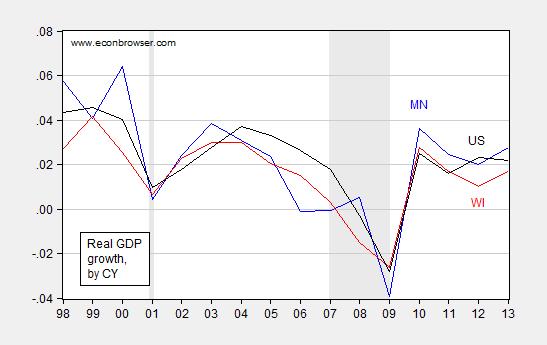 Note that a regional comparator, Minnesota, that embarked upon a different fiscal path has experienced substantially faster growth, as documented above. Forecasts indicate continued lagging.

To sum up: A procyclical fiscal policy has been undertaken in the past three and a half years, with predictably counterproductive results. The depressed level of economic activity has resulted in a revenue shortfall.