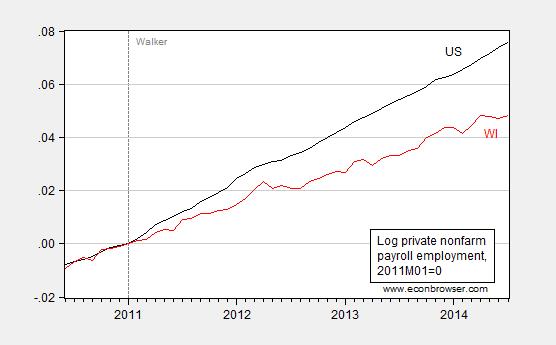 Figure 1: Log private nonfarm payroll employment in United States (black), and in Wisconsin (red), both seasonally adjusted, and normalized to 2011M01=0. Source: BLS for US, and DWD for Wisconsin, and author’s calculations. 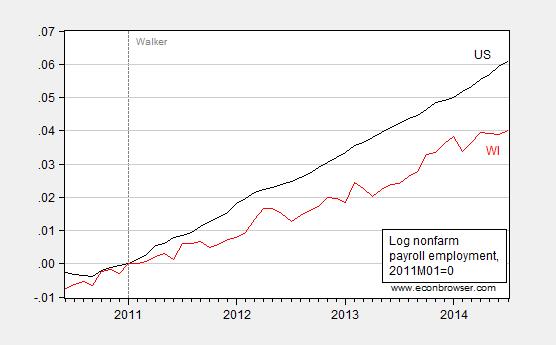 Figure 2: Log nonfarm payroll employment in United States (black), and in Wisconsin (red), both seasonally adjusted, and normalized to 2011M01=0. Source: BLS for US, and DWD for Wisconsin, and author’s calculations.

There were downward revisions to both series, pushing down the already pathetic June growth rates.

(Note that the more volatile estimates derived from the household survey indicate a loss of 1.4 thousand jobs in July, on a seasonally adjusted basis.)

Since January 2011, Wisconsin private nonfarm payroll employment growth has been a cumulative 2.8% lower than that for the United States as a whole, while NFP has been 2.1% lower.

According to these figures, private employment is now 105.1 thousand below the trend consistent with his promise to create 250 thousand net new jobs by the end of his first term (reiterated one year ago).

These figures are likely to be revised downward when the Quarterly Census of Employment and Wages (QCEW) numbers are released (see here). Recall, Governor Walker was for the QCEW before he was against the QCEW…(or at least preferring the establishment survey). 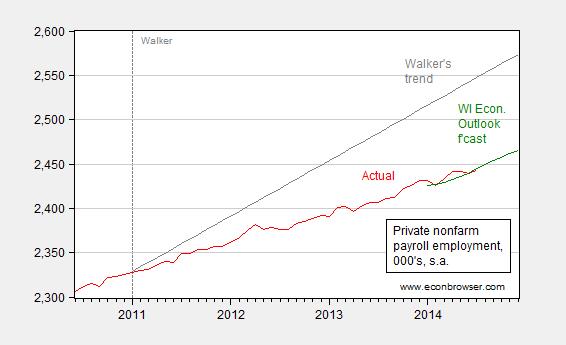 In order to hit the target by January 2015, the Wisconsin economy will need to generate 22.6 thousand net new jobs in each of every month until January. Mean job creation over Governor Walker’s term thus far has been 2.7 thousand per month. This suggests that it is unlikely that the goal will be achieved.

Data on Kansas, which has experienced stagnant employment in recent months [1], has not yet been released. I will update as soon as they are available. For depiction of June data for CA, MN, KS, relative to WI, see [2].

Update, 11:30AM 8/15: The Wisconsin GOP has their take on the employment situation: “Wisconsin is Back On, More Jobs Created Under Scott Walker”.

34 thoughts on “Wisconsin Employment under Walker”