Low ranked by ALEC-Laffer, California and Minnesota continue to power along, as shown in data released today by the Philadelphia Fed. 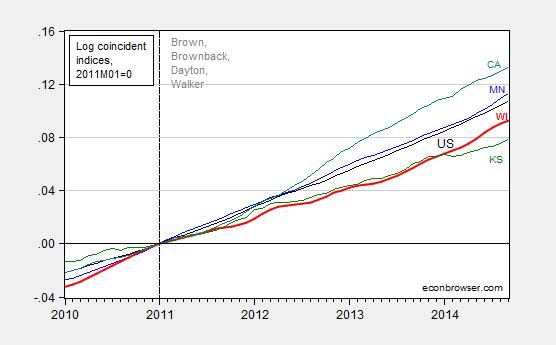 Another way of visualizing the data is to show the cumulative growth relative to that of the United States. This is shown in Figure 2. 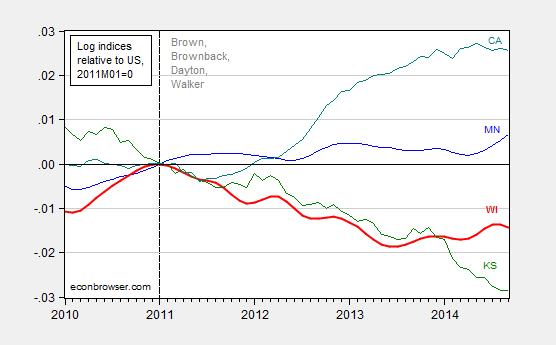 Some observers have argued that Wisconsin’s poor performance is attributable to regional shocks; if so, it is strange that Minnesota — Wisconsin’s next door neighbor — has failed to evidence a similar slowdown relative to the United States. In addition, econometric analysis of the ratio of Minnesota to Wisconsin real per capita Gross State Product indicates that the Walker administration coincides with a structural break — i.e., Wisconsin GSP per capita growth declines relative to Minnesota’s (see this post). This could be entirely coincidental, or it could be a function of policy (see yesterday’s post).

Bruce Bartlett brought my attention reminded me a few days ago to the newly releasedof the ALEC-Laffer 2014 rankings in “Rich States, Poor States” (Table 1, page 68); Kansas and Wisconsin are 15th and 17th, while Minnesota and California are 46th and 47th. In other words, RSPS’s ALEC-Laffer ranking continues to have a negative correlation with growth. (For an econometric — cross-section — evaluation, see this post).