1. Keynesians predicted disaster following the American fiscal sequester, and the pace of the recovery accelerated.

I don’t think of myself as a Keynesian (the material I teach in my courses are what have been termed the (old) neoclassical synthesis, i.e., Keynesian short run plus Classical long run — and some New Keynesian), but I thought it useful to take a look at what I wrote about the impact of the sequester. On February 19, 2013, I wrote, citing a Macroeconomic Advisers assessment, the following:

…we now put the odds of a sequestration at close to 50%, and rising.

The macroeconomic impact of the sequestration is not catastrophic. Nevertheless, the indiscriminate fiscal restraint would come on the heels of tax increases in the first quarter that total nearly $200 billion, with the economy still struggling to overcome the legacy of the Great Recession, and when the FOMC is constrained in its ability to offset the additional fiscal drag with a more accommodative monetary policy. …

Here is a graphical depiction of Macro Advisers’ estimates of the impact of the sequester.

We now have observations on eight of the quarters depicted in Figure 2 from the Macroeconomic Advisers forecast. Over the 2012Q4-2014Q3 period, MA forecast 2.20% average q/q SAAR growth. The actual average was 2.37%. Below, I reprise Figure 2, with an overlay (in green) of actually realized GDP growth data. 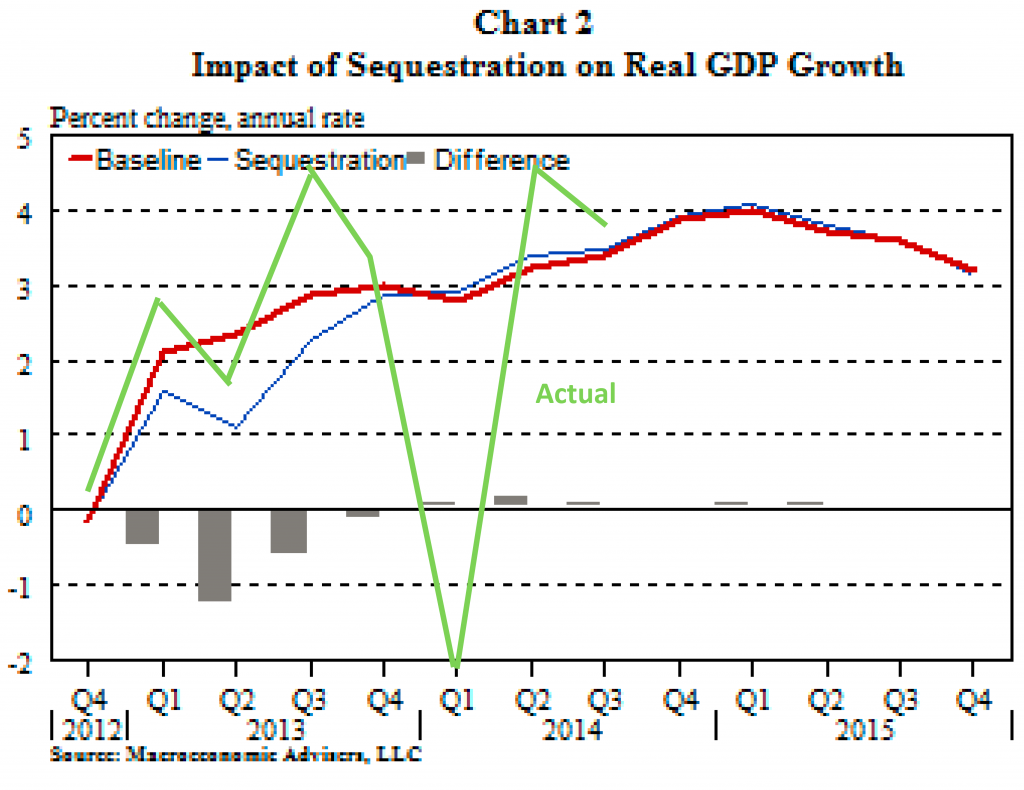 Returning to Professor Cowen’s first point, I will note that both the MA baseline and alternative were for acceleration of growth. The fact that growth did accelerate hence does not appear dispositive with regard to the Keynesian perspective.

As an aside, Professor Cowen’s point 12 befuddles me completely:

12. Whether we like it or not, large chunks of Asia still seem to regard Keynesian economics with contempt. They prefer to stress supply-side factors.

I would say that the Chinese government’s response to the global recession of 2008-09 was quintessentially Keynesian. I don’t mean to imply that the approach adopted was the ideal one — merely to highlight the fact that Professor Cowen’s characterization is not, in my view, apt. (In any case, it would not be surprising that leaders castigate a particular approach while implementing it vigorously.) See Table 3.4 from an IMF Staff Position Note written for the G20 meetings in June 2009, which indicates a substantial (discretionary) fiscal stimulus in China. 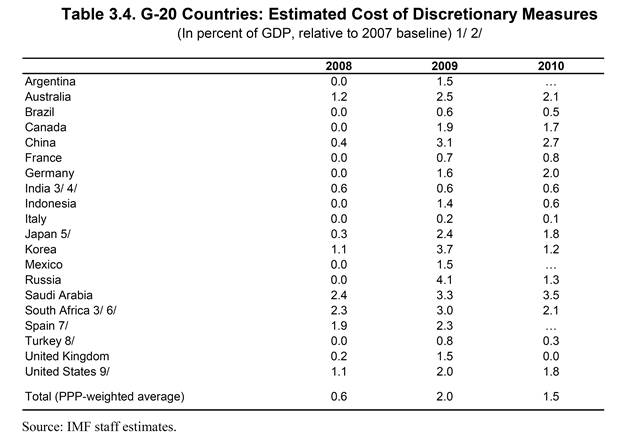 I will note that there were additional quasi-fiscal costs incurred when the government encouraged (state-owned) banks to lend. To the extent that some of these loans eventually become nonperforming, and the government has to pick up the tab, the extent of stimulus is even greater than indicated in Table 3.2.