The price of oil passed another milestone last week, falling below $50 a barrel, a level that I had not expected to see again in my lifetime. 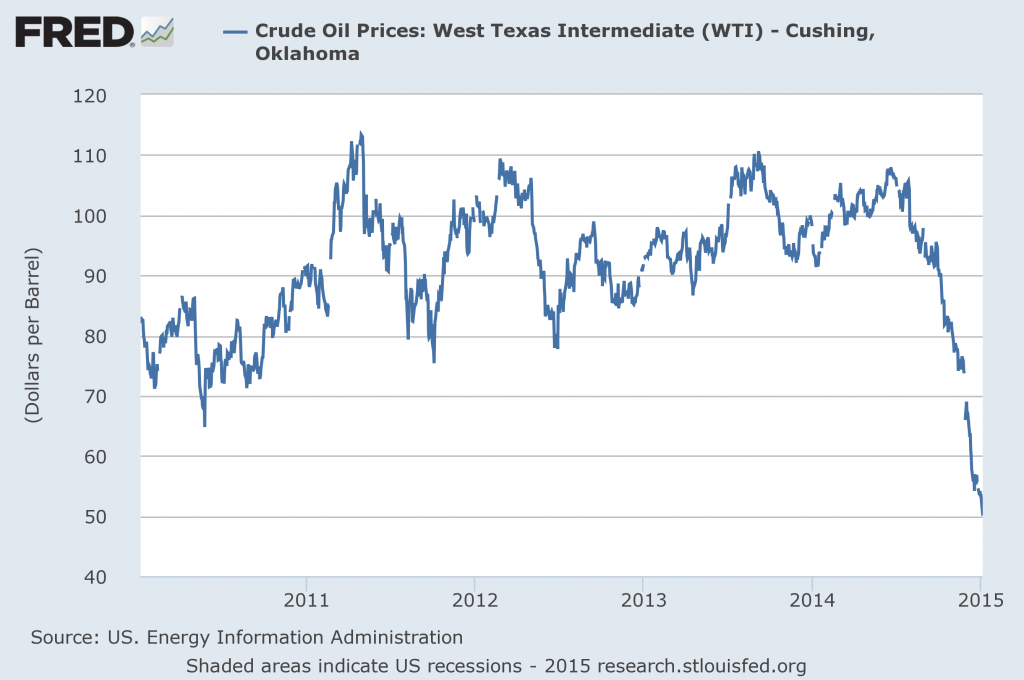 It’s interesting that we crossed another milestone last week, with the yield on 10-year Treasury bonds falling below 2%. That, too, is something I had not expected to see. And these two striking developments are surely related. I attribute sinking yields to ongoing weakening of the global economy, particularly Europe. And slower growth of world GDP means slower growth in the demand for oil. Other indicators of an economic slowdown outside the United States are falling prices of other commodities and a strengthening dollar.

A month ago I provided some simple analysis of the connection between these developments in the form of a regression of the weekly change in the natural logarithm of the price of WTI on the weekly log changes in dollar price of copper and trade-weighted value of the dollar along with the weekly change in the yield on 10-year Treasuries. Here again are the results of that regression when estimated from April 2007 to June 2014 with heteroskedasticity- and autocorrelation-consistent t-statistics in parentheses:

Last month I used that regression to ask how much of the decline in oil prices between July 1 and December 12 of last year could be predicted statistically by the changes in copper prices, bond yields and value of the dollar. I found that the regression would predict a $20 decline in the price of oil over that period. Since it seems reasonable to assume that changes in copper prices, bond yields, and the exchange rate reflect primarily global demand factors rather than anything going on specific to the oil market, I concluded that about $20 of the $47 drop in the price of oil between July 4 and December 12 could be attributed to demand factors.

The price of oil has fallen another $8/barrel since then, prompting me to update those calculations. Since December 12, copper has slid an additional 6.15%, the dollar gained an additional 2.67%, and the 10-year yield fell another 13 basis points. On the basis of the above regression, that would have led to us predict an additional oil price decline since December 12 of almost another $4/barrel.

That is, of the $55 drop in the price of oil since the start of July, about $24, or 44%, seems attributable to broader demand factors rather than anything specific happening to the oil market. That’s almost the same percentage as when I performed the calculation using data that we had available a month ago.

I had a conversation about these and other topics with Jeremy Martin of UCSD’s Institute of the Americas that you can listen in on if you’d like.

48 thoughts on “Demand factors in the collapse of oil prices”