The CBO took at face value the revenue and spending levels in the House Budget, FY2016, and assessed the impact on GNP per capita (remember, this is not a score, as there are few details on specific provisions to hit the targets). The impact is shown in Figure 2 from the CBO.

Figure 2 from CBO (2015). Notes: “These results account for the following macroeconomic effects (“feedback”): the ways in which changes in federal debt affect investment in capital goods (such as factories and computers), the ways in which changes in after-tax wages (resulting from changes in capital investment) affect the supply of labor, and the ways in which those economic effects in turn affect the federal budget. The analysis incorporates the assumption that the budget scenarios do not alter the contributions that government investment makes to future productivity and output; those contributions are assumed to reflect their past long-term trends.
Unlike the more commonly cited gross domestic product, real (inflation-adjusted) gross national product includes the income that U.S.
residents earn abroad and excludes the income that foreigners earn in the United States.
The 10-year baseline used in this report refers to the projections for the budget and the economy that CBO released in January 2015. For
information about CBO’s analysis of the extended baseline and other scenarios considered here, see the notes to Figure 1.”

I thought it was of use to investigate what happens in the short term — so zooming in on 2007-2020. Unfortunately, 2014 GNP per capita was not reported in the document, so I had to do some estimating. But in the end, this is what I obtained. 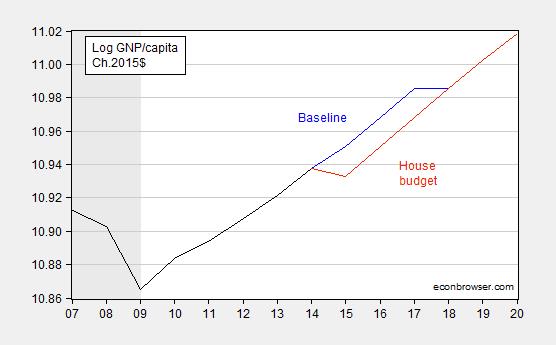 More on the (re-)appearance of the magic asterisk, from CBPP.

14 thoughts on “Short Term Implications of the House Budget”