Economic activity stalls, and the Republicans conclude that higher taxes are necessary for higher tax revenue.

[with update 6/2 on the April forecast]

Figure 1 depicts log coincident indices for Minnesota, Wisconsin, California, Kansas, and the US, as compared to 2011M01, when Governors Walker and Brownback took office. 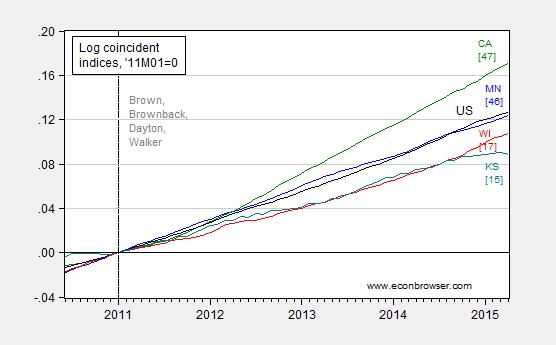 Three month growth in Kansas has flattened (-0.08%, annualized, in logs), and in fact the (preliminary) m/m annualized growth rate for Kansas is -2.4%. This is in sharp contrast to the other states in the graph, including Wisconsin which itself has lagged relative to the US and Minnesota, and lagged relative to what historical correlations up to 2010 would have indicated (and statistically significantly so). In other words, “wow!”.

Figure 2 depicts the March and April releases of the Kansas indices. Notice the recent downward revision. That is, more recent data is not improving the outlook. 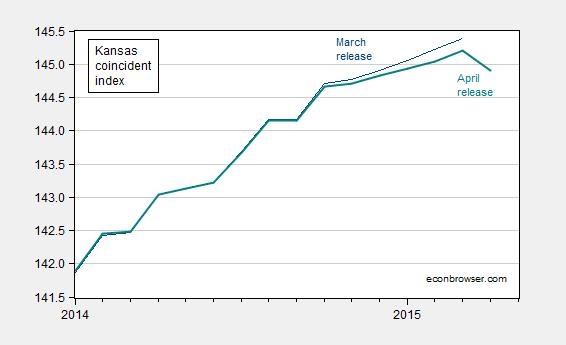 The March release of the Philadelphia Fed’s leading indices projected 0.6% growth over the next six months (non-annualized). Given the fact that the leading indices are based on time series models of the coincident, my guess is for a downgrade in the April release (on June 2).

More data on Kansas, from the Kansas City Fed.

On the budget side, the situation has deteriorated as well, going from bad to worse. The $400 million gap that is widely cited in the media is actually likely an understatement. As noted by Goossen at Kansas Budget blog, the $400 million presupposes a set of short-term fixes in the form of transfers. Closing the $400 million gap by “…by increasing the state sales tax to 6.65 percent from 6.15 percent and eliminating most income tax deductions” [Foxnews] would leave only $81 million in reserve, when state law requires an end-year balance of $500 million.

For more on the budget situation, see Eligon/NYT. I think there will be a lot more “whistling” going on soon. 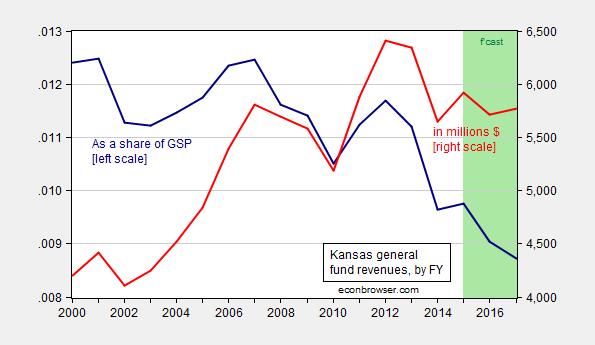 Notice the collapse in revenues as a share of GSP is on-going, according to the government, despite the (forecasted) revenue stabilization in dollar terms. 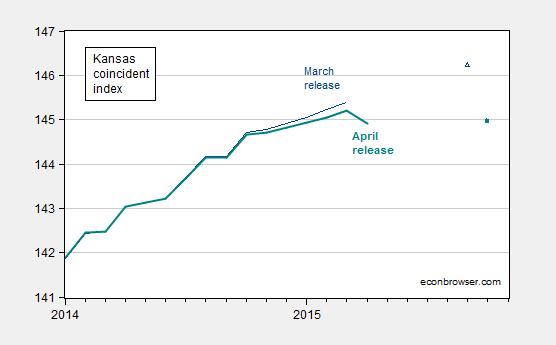 In other words, the outlook is pretty dismal for Kansas.