A surge in imports lifted the U.S. trade deficit in March to its highest level in nearly 6-1/2 years, suggesting the economy contracted in the first quarter.

Growth, however, is regaining momentum as other data on Tuesday showed activity in the services sector, which accounts for more than two-thirds of the economy, accelerated to a five-month high in April.

“It looks like we are going to have negative GDP for the first quarter, just based on trade, but we expect a robust rebound in the second quarter. A lot of the headwinds we saw in the first quarter have unwound,” said Jacob Oubina, senior U.S. economist at RBC Capital Markets in New York.

Macroeconomic Advisers has provided some estimates of the impact on GDP and the trade balance. Figure 1 depicts real GDP. 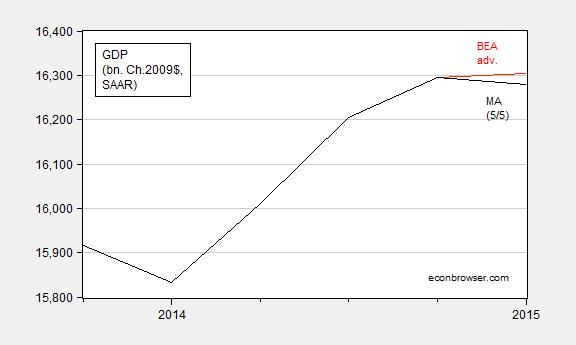 Both imports and exports were revised, but imports were more noticeably affected, as shown in Figure 2. 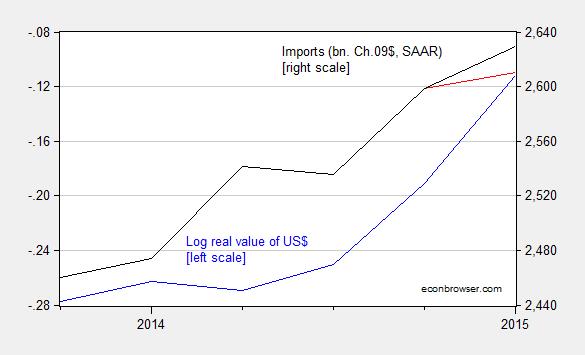 The impact on estimated exports was smaller — but the drop in exports is (particularly) worrisome nonetheless. 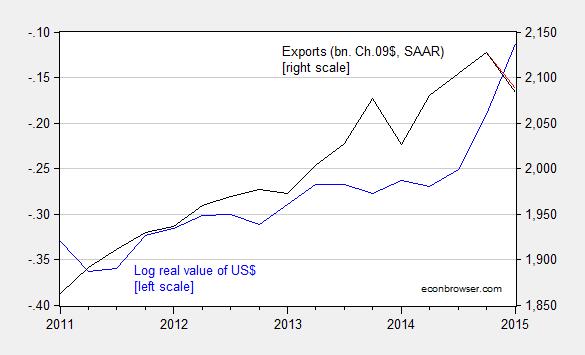 The correlation of the surging dollar and the drop in exports is suggestive, but in order to identify the relative importance of this factor, one would want to use a regression model to estimate what share of the decline is coming from slowing overseas growth. In this post, I recount that a 20% appreciation would eventually knock off about 14% of exports relative to baseline (in this case of non-agricultural goods exports — the exact figure for total exports would be different).

For me, this outcome merely confirms that in my view it is too early to tighten monetary policy. As I’ve suggested, the dollar is strongly correlated with the shadow policy rates in the US and abroad; to the extent that the Fed can influence the shadow rate by forward guidance, it makes sense to err on the side of caution, and maintain an expansionary monetary policy.