Today we are fortunate to have a guest contribution written by Carolina Osorio Buitron, Esteban Vesperoni, and Prakash Loungani, from the Research Department of the International Monetary Fund. The views expressed in this blog are solely those of the authors and do not necessarily represent the views of the IMF, its management, nor its Executive Board.

Though this week’s FOMC statement is still being parsed, market participants generally expect the Federal Reserve to raise policy interest rates this September. In contrast, the European Central Bank has significantly eased monetary policies over the past year and is expected to maintain accommodative policies for a substantial period of time. Should emerging markets fear the consequences of the so-called Fed liftoff and the likely increase in U.S. long-term bond yields?

Analysis in the IMF’s latest Spillover Report suggests the answer is “no”. Good news about economic growth in the U.S. raises economic activity in emerging markets and in other advanced economies (henceforth referred to for convenience just as ‘emerging markets’), despite the associated rise in bond yields.

Bond yields in major advanced economies such as the United States could rise for many reasons. The analysis in the IMF’s report–and in a comprehensive background note–tries to uncover the underlying shocks behind the rise and show that the impact on other countries depends on why bond yields rise in the first place.
Specifically, three types of shocks are identified based on the joint behavior of bond yields and stock prices (a strategy that originated with Matheson and Stavrev):

Monthly data on 10-year bond yields and stock prices from 1994 to the present is used to identify the shocks; real and money shocks for the U.S. and euro area are identified in a unified two-economy framework.
The relative contribution of the shocks to U.S. and euro area bond yields is illustrated in Figure 1 for the period since mid-2013. The increase in U.S. bond yields over 2014 was in large part driven by positive real shocks—that is, good news about growth prospects (panel 1)—whereas the decline in euro area yields reflected both real and money shocks—that is, weaker growth prospects and perceptions of easier monetary policy (panel 2). 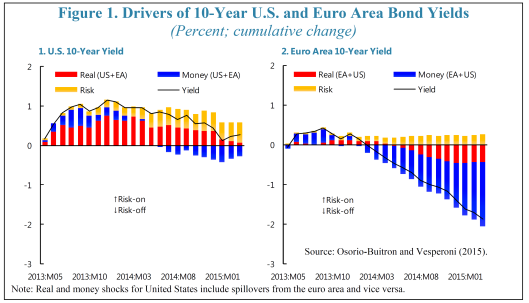 The big payoff comes when we estimate the impact of the real and money shocks on emerging economies. The findings are shown in Figure 2. The bars show the impact of a 1 percentage point increase in bond yields in either the U.S. or the euro area on bond yields, net capital inflows and industrial production in other economies. The impact shown is the average across the various economies.

The striking feature of the results is that real and money shocks in either the U.S. or the euro area have vastly different spillover effects on other economies. This can be seen by comparing the panels on the left with those on the right. While both types of shocks lead to an increase in bond yields in other economies, real shocks lead to higher capital inflows and an increase in industrial production, whereas money shocks do the opposite.

It may appear surprising that higher growth in the United States or euro area leads to higher flows to emerging markets. There are two channels at play here. First, there is the ‘traditional channel’ through which a growth shock in the U.S. (or euro area) induces capital to flow to the country where the shock originates and causes an appreciation of the dollar (or the euro). Second, there is a ‘risk appetite channel’, through which a real shock boosts investor risk-appetite—investment in emerging markets increases as better economic prospects are envisaged at the global level. This channel would cause capital to flow to emerging markets and their currencies to appreciate. Our results suggest that the second effect dominates—likely related to size of capital flows out of emerging and systemic countries. 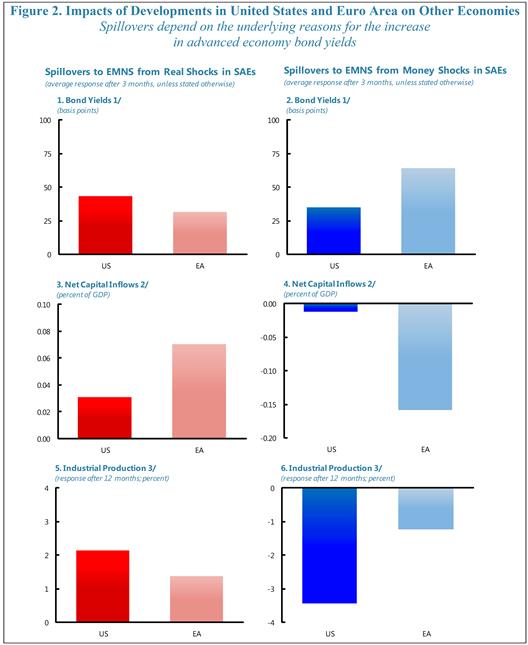 The results also show that both U.S. and euro area real shocks have positive spillovers on other economies. Hence, spillovers to emerging economies could be amplified when there is good news about growth prospects in both the United States and the euro area (“synchronous” episodes of positive real shocks) and dampened when there is good news about one but not the other.

There are also some differences in spillovers across regions, reflecting different economic links with the United States and Europe. For instance, the effect of a real shock in the euro area is considerably larger in Emerging Europe than in other regions owing to stronger trade links. Real shocks in both the United States and Europe generate larger capital inflows to Asia than to other regions, partly because the sample of Asian economies includes two world financial hubs—Hong Kong SAR and Singapore—that experience much larger capital inflows than other emerging markets.

Good for them, good for others

To sum up, monetary policies in major advanced economies like the United States and the euro area can generate positive spillovers for other countries. These policies are the appropriate domestic response to the situation these countries face of output below potential and inflation below target. Closing output gaps will, in turn, will lower unemployment (as one of us noted in a previous Econbrowser post) and raise investment (as the IMF’s First Deputy Managing Director David Lipton noted recently).

The analysis in the spillover report suggests that these actions will also have a positive impact on economic activity in other countries if they are perceived as good news about growth prospects in advanced economies. Of course, if advanced economy interest rates rise for reasons other than improved growth prospects, this could be associated with lower economic activity in other economies. However, since monetary policy actions are expected to close output gaps (i.e. improve growth prospects), the likely scenario is the one shown in the left panels of Figure 2.

Though not discussed in the latest report, the advice given in the previous IMF spillover reports on additional steps that major advanced economies can take to ensure positive spillovers remains valid: