The dramatic decline in the prices of a number of commodities over the last 16 months must have a common factor. One variable that seems to be quite important is the exchange rate.

Dollar prices of five commodities along with dollar cost of one euro. Source: Financial Visualizations.

Here’s a graph over a longer period of the dollar price of oil, the dollar price of copper, and the dollar price of a weighted average of other countries’ currencies with weights based on the volume of trade between the U.S. and each country. The graph is plotted on a logarithmic basis, so for small changes the height of each series corresponds to the percent difference between the price at the indicated date and the price at the end of June 2014 (see my primer on the use of logarithms in economics if you’re curious about those statements or why it might be helpful to plot series this way). The plunge down in all three measures since June 2014 that was highlighted in the first set of graphs is seen to be a broader pattern of striking positive co-movements among these variables. 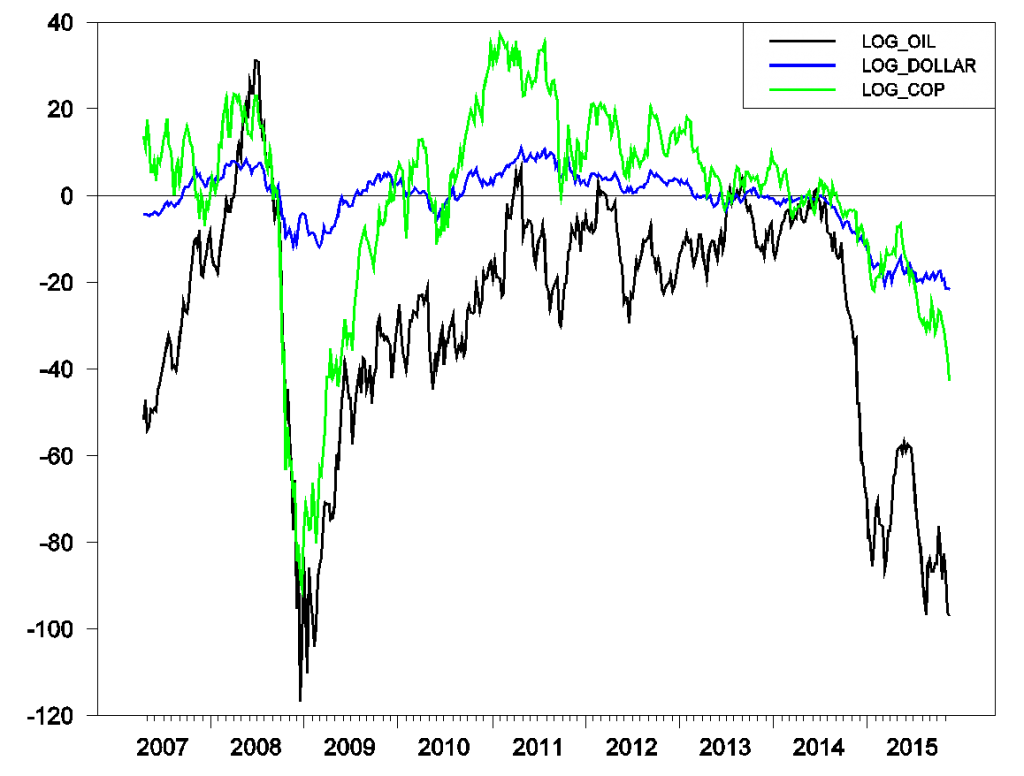 Price of West Texas Intermediate (black), copper (green), and inverse of trade-weighted value of the dollar (blue), end of week values April 20, 2007 to November 20, 2015. Graph plots 100 times the difference between the natural logarithm at the indicated date and the natural logarithm on June 27, 2014. A value for the blue series below zero means that the dollar was worth more on that date than it had been on June 27, 2014.

For example, the most striking episode in the graph above is the Great Recession in 2008-2009. Falling GDP around the world meant falling demand for commodities. It was also associated with a flight to safety in capital markets, which showed up as a surge in the value of the dollar. It’s not the case that the strong dollar then was the cause of falling dollar prices of oil and copper. Instead, the Great Recession was itself the common cause behind movements in all three variables.

One way to get a sense of how the driving factors have changed over time is to look at a regression of the weekly logarithmic change (approximately the weekly percentage change) of the dollar price of oil on the weekly logarithmic change in the exchange rate using a rolling 2-year window. Each point in the graph below plots that estimated coefficient using a sample of two years’ data ending at the indicated date. The coefficient was above two during and after the Great Recession– if the dollar appreciated 1% during the week in that period, you would expect to see more than a 2% decline in oil prices. The coefficient fell below one in the first half of 2014 but has since risen back above one. 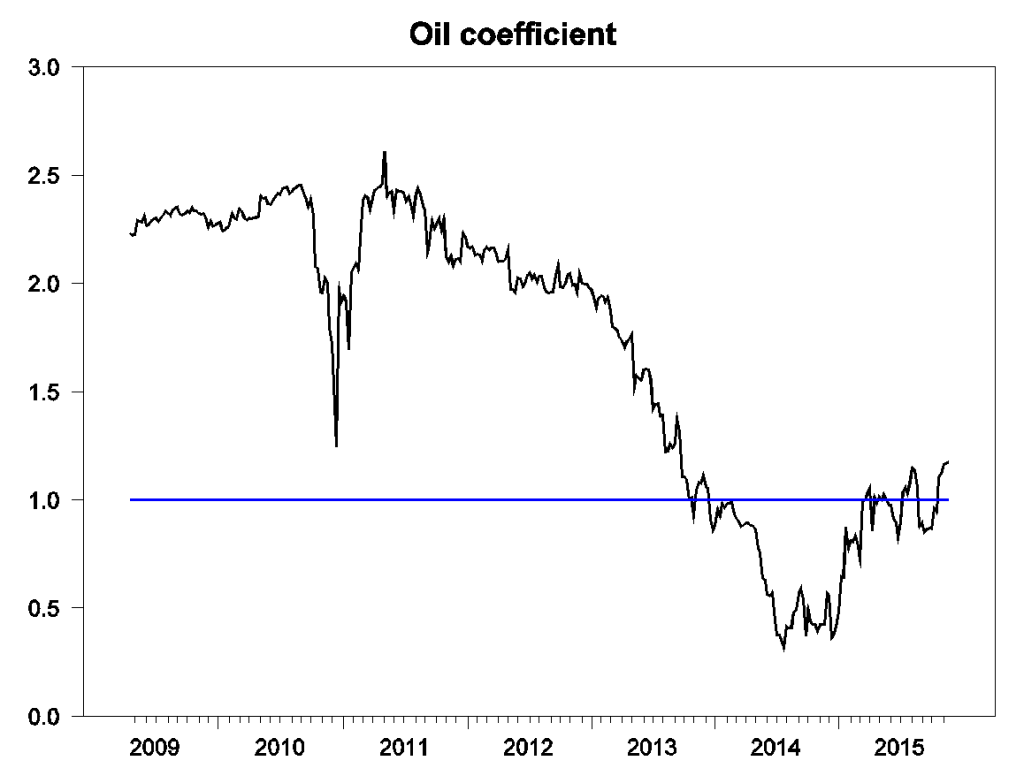 I had been giving a similar interpretation to the correlation since June 2014 as to the data from the Great Recession– news about weakness in the world economy seemed to be a key reason for strength of the dollar over the last year and a half, and would also be a reason for declining commodity prices.

However, developments of the last three weeks call for a different explanation. The October 28 FOMC statement and subsequent statements by Fed officials have made clear that a hike in U.S. interest rates is coming December 16. An increase in U.S. interest rates relative to our trading partners is the primary reason that the dollar appreciated 4% (logarithmically) since October 16. Over that same period the dollar price of oil and copper each fell 16%.

Jeff Frankel has long suggested that higher interest rates lead directly to lower commodity prices through a variety of channels. For example, if the Fed raises interest rates, that may reduce the level of economic activity and thereby lower commodity demand. But the recent correlation is in the opposite direction. Over the past 5 years, if long-term interest rates fall, oil prices likely do as well. My interpretation of this pattern has been that falling interest rates are a response to a weaker global economy, which itself is also a contributing factor to lower oil prices. 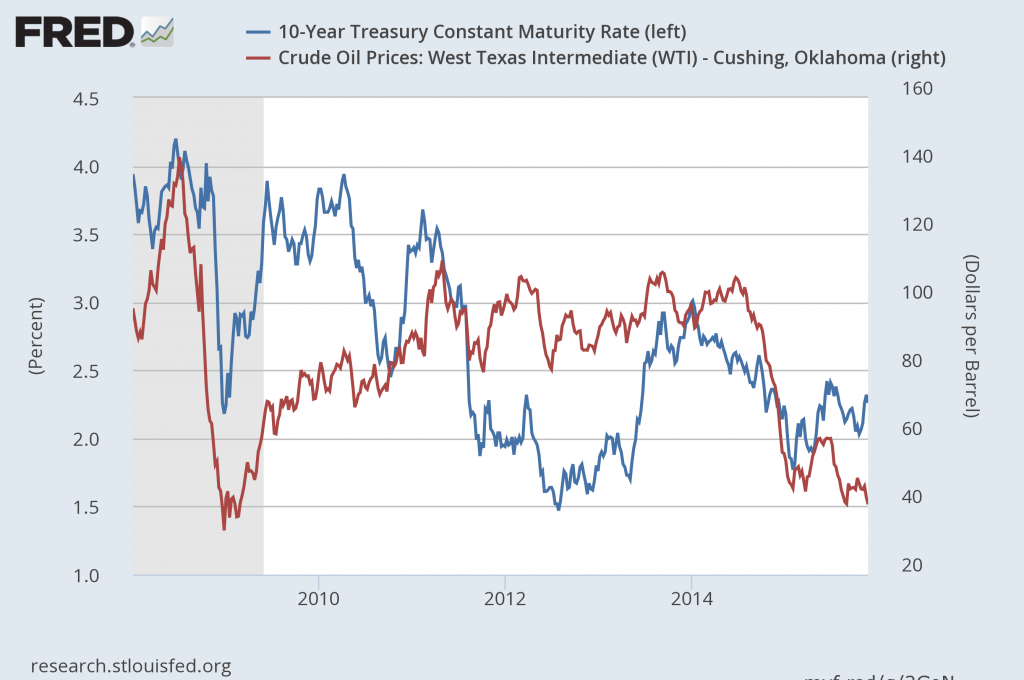 For some time I’ve been using a simple summary of these various correlations in the form of a regression of the weekly change in the price of oil on that week’s change in the price of copper, the value of the dollar, and the interest rate on a 10-year U.S. Treasury bond. The regression is estimated over the period from April 2007 to June 2014. The price of oil was more likely to decrease in a given week if the copper price also decreased, the dollar appreciated, or interest rates fell. The overall decline in copper prices, appreciation of the dollar, and decline in interest rates since June 2014 would have led one to predict that the price of oil would have fallen from $105/barrel in June 2014 to around $65 today, or about 60% of the observed decline. The actual and predicted price of oil that comes out of these calculations is plotted for each week since June 2014 in the graph below. 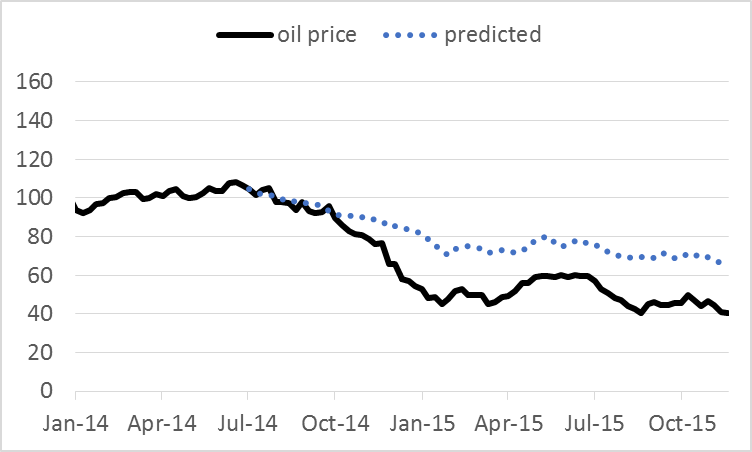 We have a friendly tool with data links that you can use to perform these calculations yourself for any start and end date of interest. For example, the model predicts that oil prices would have fallen from $47.30 on October 16 to $43.19 today, about half the observed decline. If all that had changed over that period had been the rise in interest rates, we would have expected to see the price of oil increase, not decline, over the last month. The observed decline in copper prices and appreciation of the dollar are more than enough to counteract that effect and account for a significant part of the observed decline.

Whether that’s a fully rational market adjustment is a question for which only time will give the answer. But I will offer the view, based on the market reaction so far, that if the Fed’s objective in raising rates is to lower U.S. inflation and GDP, it seems to have taken a significant step in that direction.