I’m not going to “pull an Ed Lazear” and declare “no”. But the current versions of indicators are not very supportive of a “yes” answer.

The US is likely in recession, which was not (and will not be) preceded by a yield curve inversion.

As noted in yesterday’s post, no US recession is indicated by current spreads. Key indicators [1] monitored by the NBER’s Business Cycle Dating Committee (BCDC) do not suggest we are in a recession currently, save industrial production. 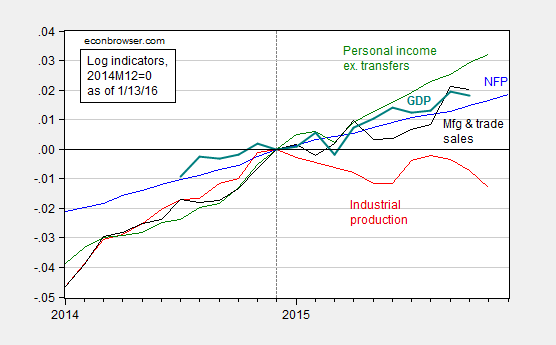 Industrial production is 1.3% below peak. Interestingly, manufacturing output is 1% above peak. The other indicators continue to trend upward. Notice the monthly GDP measure is an estimate provided by Macroeconomic Advisers. Figure 2 depicts another measure of monthly GDP, as well as the official BEA measure. 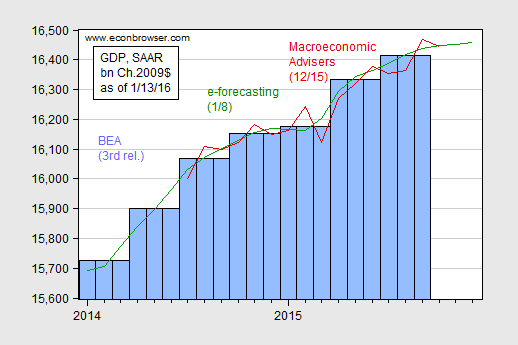 The 2010 BCDC memo lists Stock and Watson monthly GDP and GDI measures, as well as civilian employment and aggregate hours. Only the latter two series are freely available, so I’ll also plot those. 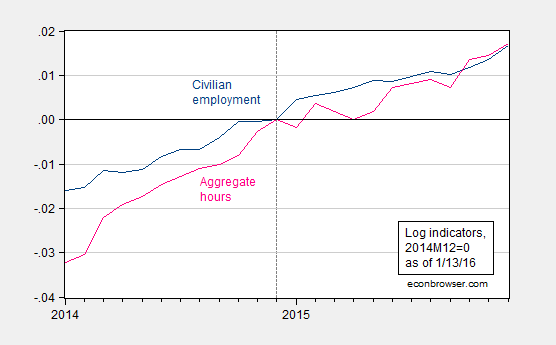 Obviously, nothing definitive can be said; these series will all be revised. But with four out of the five indicators higher than they were in 2014M12, it seems to me at the minimum, the jury is still out on an ongoing recession.

Update, 1/14 9am Pacific: Tim Duy has an employment data-based assessment. The WSJ survey is out. In response to Anarchus’s comment regarding “now”, here is the histogram of forecasts for 2016Q1 q/q growth at annual rates.