I keep on seeing comparisons between the Great Depression and the Great Recession (e.g., [1]), and how a big fiscal stimulus could result in a big and sustained jump in output. I think it useful to visually compare the extent of downturn in both cases. 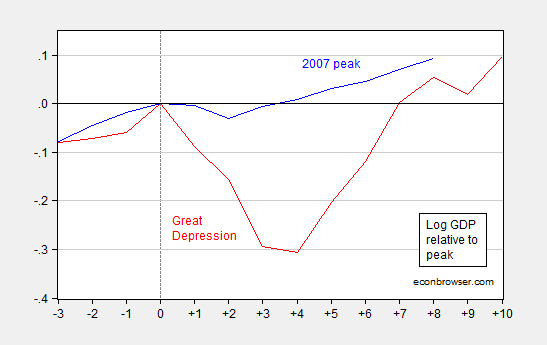 In other words, while the deep output drop during the Great Depression was followed by rapid growth, the drop by 2009 of 3% (relative to peak) was dwarfed by the 1933 drop of 31%.

In any case, the proposition that a deep recession necessarily implies subsequent fast growth, as forwarded in the 2009 Economic Report of the President (the last one produced under the Bush Administration), is a dubious one.

The foregoing, in conjunction with stable core CPI inflation (3.5% m/m AR, 2.2% y/y), suggests to me an output gap that is smaller (in absolute value) than 18% implied by a 1984-2007 linear deterministic trend and 11% as Gerald Friedman suggests.