Or, “Is current output really 18% below potential output?”

One thing that should be remembered is that the trend line extrapolated from 1984-2007 implies that the output gap as of 2015Q4 is … -18%. A graphical comparison which highlights the implausibility of the -18% output gap is shown below: 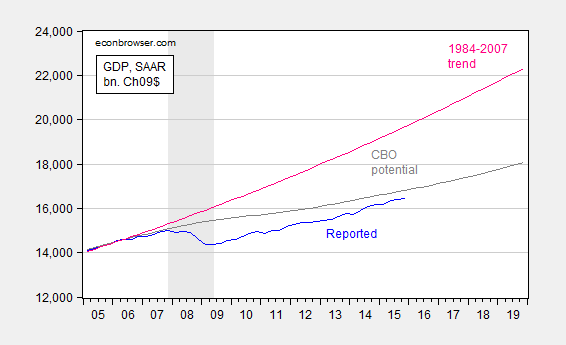 By way of comparison, the CBO’s estimate is -2.2% (both in log terms). OECD estimates 2015Q4 output gap at -1.9%. [1] The IMF in its Article IV consultation with the United States estimated a gap of -1.6 percentage points of potential GDP for 2015, -0.7 percentage points for 2016. [2] If indeed the output gap is 18 percentage points, most mainstream economists would expect to see substantially lower core inflation than what we have observed thus far.

One could argue that low headline price inflation suggests more slack than these estimates indicate. I have two observations: (1) the most recent report of higher core CPI inflation runs counter to the presumption of enormous slack, and (2) using a modified Ball-Mankiw approach and the lower inflation back in 2015Q3, and assuming completely anchored inflation expectations, the implied gap was much smaller in absolute value terms than 18%.

Another way to resurrect the proposition that the assumptions built into the projections are not extreme is to assert that the aggregate supply curve is very flat (see footnote 16 in Friedman (2016)).

Addendum, 2/20 7pm Pacific: I want to stress that estimating potential GDP and the output gap is a difficult task. For those interested in the details, read these posts: [3] [4] [5].

14 thoughts on “What Is the Assumed Output Gap in the Friedman Projections?”