There’s an argument being made that because of the zero lower bound, the standard nominal term spread is unlikely to be as accurate a predictor of recessions as it has in the past. A prominent example of this view circulating now is that forwarded by Deutsche Bank’s Dominic Konstam; his analysis indicates a 60% likelihood of recession (WSJ RTE), in contrast to the estimates obtained from the standard model, ranging in the low teens (see for example this post).

Konstam adjusts the term spread by using the residual from the regression of the 10 year-3 month spread on the 3 month rate as a predictor of recessions. This, it’s asserted, removes the bias that comes about from the fact that the short rate has been bound in recent years.

What is true is that the real interest rate, both at short and long horizons, is not bound, so in principle one could examine how the real spread covaries with recessions. Two problems arise: (1) the real rate is unobservable, and (2) for observable proxies for the real rates, the time span is short relative to the number of observed recessions. Consequently, formal analysis is not possible (or, more accurately, not advisable). Still, I think it is of interest to see whether the real spread predates recessions. This is shown in Figure 1. 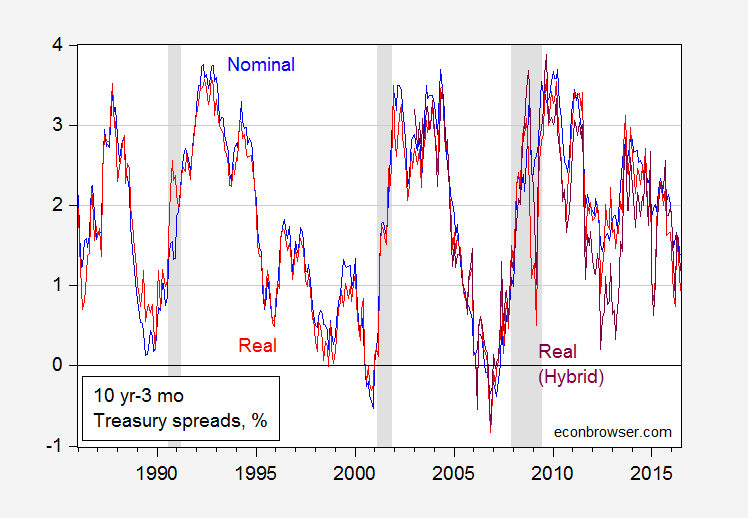 I’ve plotted the series for the period of the “Great Moderation”; it’s not possible to go much earlier, as the expected inflation series only goes back to 1982.

It would be inadvisable to take too much from these correlations. However, it would seem that an unconstrained measure of the slope of the yield curve is not too different from the constrained version, at the moment (or — more accurately — as of June 2016).

Update, 8/7 1AM Pacific: Peak Trader observes that recessions are usually preceded by elevations in the Fed funds rate, to wit: 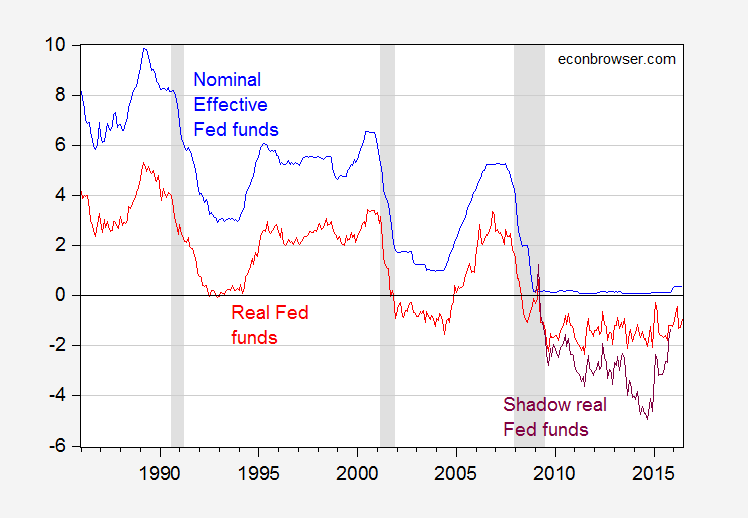 While the change in the nominal Fed funds — and even real Fed funds — should give little cause for concern, the real Wu-Xia shadow Fed funds rate has risen quite precipitously. I would say that this development alone should give pause for thought for those advocating continued monetary tightening. On the other hand, Peak Trader omitted one observation — there was a 2.5 percentage point increase in the Fed funds rate in the 1994-95 period not followed by a recession.

13 thoughts on “The Real Term Spread and Recessions”