Is a current undervaluation of the Chinese yuan plausible?

President candidate Donald Trump has argued for the imposition of tariffs on Chinese imports as a proper response to Chinese manipulation of the currency.[0] [1] Figure 1 depicts the nominal USD/CNY exchange rate in the blue line (where down is a depreciation of the Chinese currency). 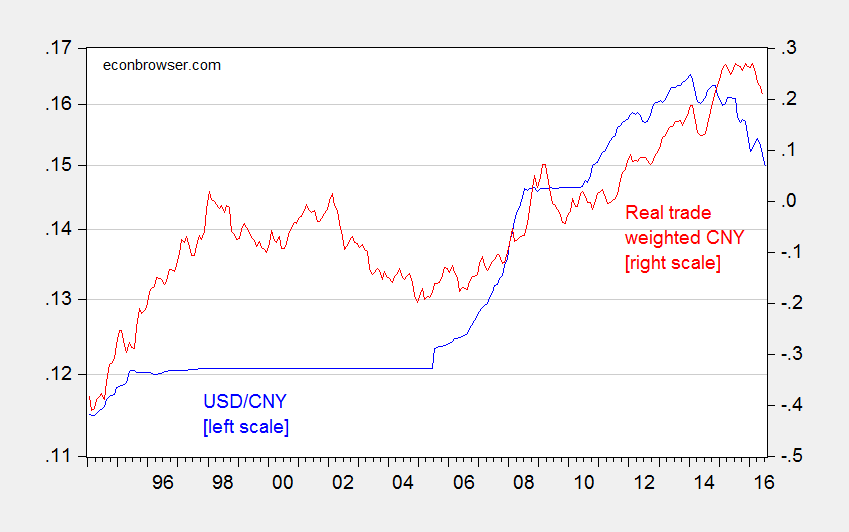 While the CNY has clearly depreciated against the US dollar, roughly 10% in log terms, the nominal bilateral exchange rate is pretty irrelevant in macro terms. The real, and effective, currency value is more important. And here, the depreciation is much less pronounced, roughly 6%.

Now, these are changes relative to some date; what we want to know is where the Chinese exchange rate is relative to where it should be. This is a much more involved question, taken up in many previous posts (see [2] [3] [4]). Rather than reviewing the material on currency misalignment, I’ll focus on the update to my previous work which views misalignment through the lens of the “Penn effect”, the phenomenon that the value of a currency in real terms varies with per capita income.

In a recent paper written by myself, Yin-Wong Cheung and Xin Nong, we find that by 2011, the Chinese currency was roughly at equilibrium. This is shown in Figure 2, which displays a quadratic fit of price level to per capita income (both in PPP terms). Even after the recent depreciation, the CNY is still some 20% above where it was in 2011, suggesting that the CNY is not currently undervalued. If significant undervaluation is an important component of one’s definition of currency manipulation, then the case for imposing massive tariffs on the order of 45% is very weak.