Today, we present a guest post written by Jeffrey Frankel, Harpel Professor at Harvard’s Kennedy School of Government, and formerly a member of the White House Council of Economic Advisers. A shorter version appeared on October 25th in Project Syndicate.

Populist politicians, among others, have claimed in recent years that monetary policy is too easy and that it is hurting ordinary workers. But raising interest rates is not the way to address income inequality.

It is a strange claim for anyone to make, but especially for populists. Low interest rates are good for debtors, of course, and bad for creditors. Throughout most of US history, populists have supported easy monetary policy and low interest rates, to help the little guy, against bankers, who had hard hearts and believed in hard money. That was the argument when William Jennings Bryan ran for president in 1896 on a platform of easier money, with the support of Midwestern farmers who were suffering from high interest rates and declining commodity prices. It was the argument when supply-siders opposed Paul Volcker’s high interest rates, leading Ronald Reagan in 1985 to appoint two Federal Reserve governors who would challenge the Chairman.

An interesting dimension concerns gold. In the 1890s, Bryan’s proposed reform for allowing easy money was to take the US off of the gold standard, most famously in his “cross of gold” speech. (He vowed to lead the people as they confronted “the idle holders of idle capital,” declaring “You shall not press down upon the brow of labor this crown of thorns; you shall not crucify mankind upon a cross of gold.”) In the 1980s, the supply siders’ proposal for easier money was to put the US back onto the gold standard. In this election year Donald Trump, following Ted Cruz and other Republican presidential candidates, has said he too would like to go back to the gold standard. But when Trump and other Republican politicians express admiration for the gold standard now, it is because they want tougher monetary policy. It is hard to find a consistent thread. Republicans seem to want monetary stimulus when they are in office, and to oppose it when they are not.

The truth is, monetary policy is not a very appropriate lever with which to address income inequality. That is not to say that inequality is not important. It is. Most of the increases in GDP have gone to those at the top since the 1970s. But the right tools to address the inequality problem are progressivity in taxes, universal health insurance, financial reform, and so on. To draw an analogy, global climate change is an important problem, but monetary policy is not the right tool for that job either.

The job of monetary policy is to promote growth in the overall economy while maintaining price stability and financial stability. This is not at odds with helping those in the lower rungs of the income ladder. To the contrary, a “high-pressure economy” (to invoke a phrase recently revived by Fed Chairman Janet Yellen), that is, an economy running hot enough to create jobs at a rapid rate, will eventually lead to higher real wages for workers and higher real incomes for the typical worker. This describes the results, for example, in the high-pressure economy of the late 1990s which eventually pushed the unemployment rate below 4%.

Some may then react: Why has that not happened in the current expansion? The answer is that it has.

The economy has added more than 15 million private sector jobs since early 2010. Employment growth has been running well in excess of the natural rate of increase in the labor force. The longest continuous series of monthly increases on record had brought the unemployment rate down to 5% by last year (from above 9% in 2009-10) and is now pulling previously-discouraged workers back into the labor force. The increased demand for labor has in turn led to rising real wages for workers (up 2 ½ % last year), at the fastest rate in this business cycle than any since the early 1970s.

Until recently, the labor market gains puzzlingly did not seem to be show up in the reported real income of the typical American household. But last month, when the Census Bureau released its annual economic statistics, they showed that median household income had increased by 5.2 percent [$2,800] in 2015, the biggest rise on record (see chart). Furthermore, every part of the income distribution benefited, with the biggest percentage gains going to those in the bottom tier and the smallest gains going to those at the top. These are big changes and offer important confirmation that lower-income families are finally sharing in the economic recovery. 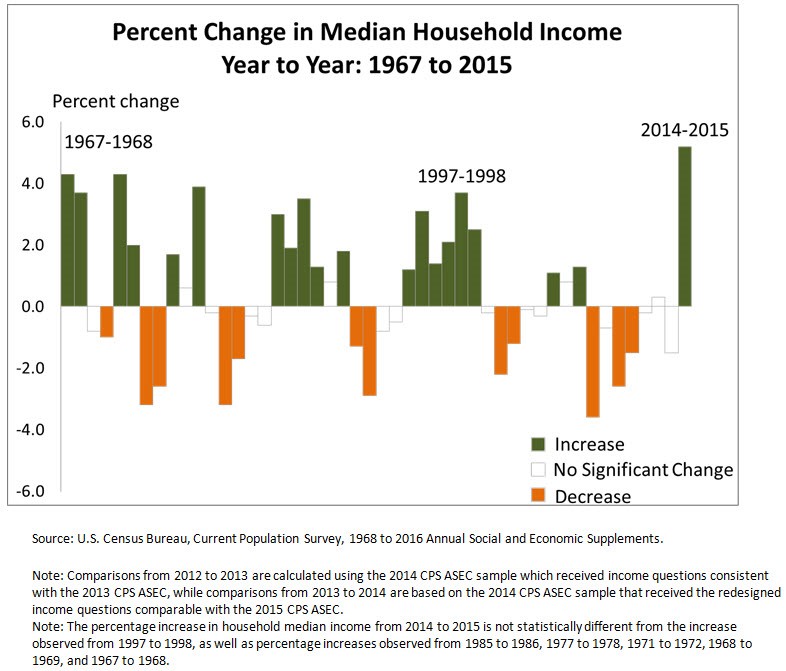 What about those who think that easy monetary policy is bad for income inequality? What are they thinking? Not all of them are fringe populists. For example, British Prime Minister Theresa May said earlier this month that low interest rates were hurting ordinary working class people while benefiting the rich.

A fall in interest rates contributes to a rise in securities prices, both stocks and bonds. Needless to say, the rich hold more stocks and bonds than the less fortunate. “People with assets have gotten richer. People without them have suffered,” aid PM May. And indeed, stock prices are high now, near all-time highs in the case of the United States.

The Fed reductions in the policy interest rate occurred quite a while ago, virtually to zero in 2008. That monetary stimulus together with the associated recovery of the economy no doubt contributed to the turnaround and strong rebound in the stock market that began in early 2009. But it is harder to use the low level of interest rate to explain the continued rise in the stock market from 2012 to 2015, a period when the Fed announced an end to quantitative easing and markets began to anticipate that it would soon start to raise interest rates.

One can think of other distributional implications of easy monetary policy as well. Inflation is good for debtors and bad for creditors. That is one reason why good populists have historically favored easy money.

The unconventional monetary policies of recent years [UMP] may have some new effects of their own. One is the effect on banks, whose profits have been severely squeezed of late. Low interest rates are a major reason for this compression of bank profits, especially in Europe where the interest rates that banks earn are actually negative but where it is hard for them to cut the rates they pay to their depositors below zero. Any self-respecting populist should like this squeeze on banks, especially if he or she is still angry about the global financial crisis.

The net effect of easy money is probably more to reduce inequality than to exacerbate it, according to econometric estimates. But the effect on income distribution is much less reliable than the effects of other policies targeted for that purpose. In any case, the Fed and other central banks are not balancing rapid growth against equality, but rather are balancing rapid growth against dangers of future overheating and financial instability. They view their jobs as managing the overall economy. They are right to do so.

27 thoughts on “Guest Contribution: “The Fed and Inequality””