Among the many promises made by President Elect Trump, one was to declare China a currency manipulator on his first day in office. Besides the logistical difficulties of doing so without a Treasury Secretary in place, there are the minor difficulties of what the data indicate (I know, I know, facts seem of little import these days, but what the heck). In addition to the legally defined concerns Brad Setser has raised, I think it is useful to assess China’s currency using a commonly used measure of currency misalignment.

Recall, in recent work with Yin-Wong Cheung and Xin Nong, we found that that as of 2011, the yuan was not misaligned using the Penn effect allowing for nonlinearity. Now 2011 is a while ago, but we were constrained by the availability of internationally comparable price level data in the Penn World Tables (PWT).

Our findings using World Bank World Development Indicators (WDI) data up to 2014 indicated substantial overvaluation (in both 2011 and 2014); since the 2011 estimates of misalignment differ so much between the PWT and WDI datasets, that suggests an alternative check to determine misalignment. I use the the Big Mac index as of July 2016, and WDI PPP estimates of per capita income for 2016.

Using a sample of 55 countries (Data [XLSX]), I estimate the following regression:

In Figure 1, I show the scatter plot for July 2016, and the curve fitted through the data, forcing the intercept to go through the origin, thereby forcing the US dollar to have no misalignment against itself. 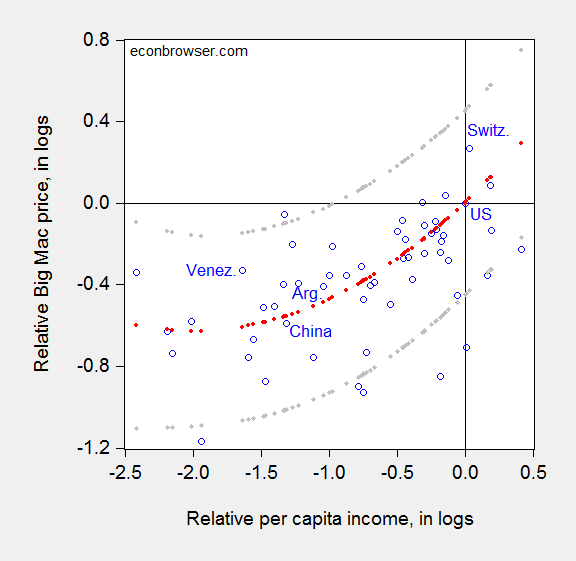 The implied undervaluation of the Chinese yuan is 3.7% (log terms) as of July 2016. Of course, the estimate is surrounded by high degrees of uncertainty (as evidenced by the prediction interval) (see Cheung et al. (2007)).

Since July 2016, the yuan has continued to drop against the US dollar, in nominal bilateral terms (see Figure 2): 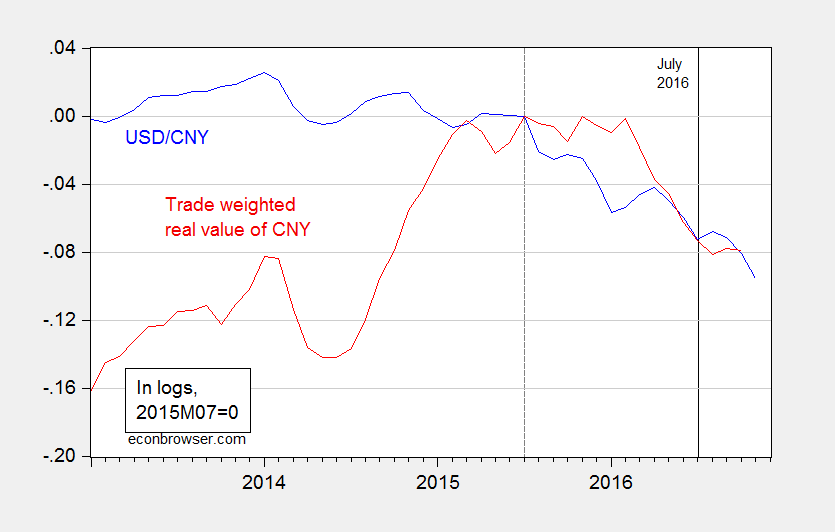 For more on the various frameworks to assess currency misalignment, see this post. Brad Setser discusses “currency manipulation” in the context of American legislation regarding the determination of offending parties.

7 thoughts on “Day One Approaches! Currency Manipulation, China and the Big Mac Index”