As noted in my last post, the collision of expansionary fiscal and counter-cyclical monetary policy will result in an appreciated dollar. How much more appreciated?

To get a first take on this question, first consider Figure 1 which shows the real value of the dollar against major currencies over the last 12 years, as well as the US-euro area real interest differential. 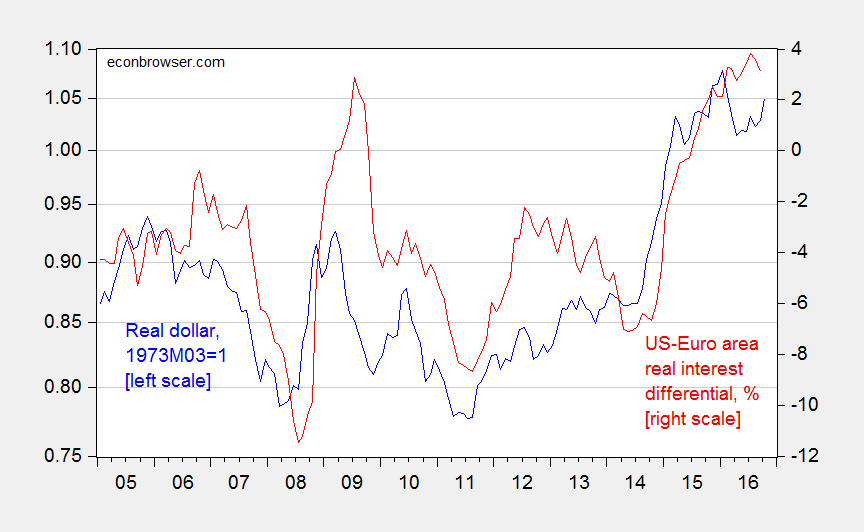 Figure 1: Real value of US dollar against major currencies (blue, left log scale), 1973M03=1, and nominal shadow Fed funds and ECB rates adjusted by lagged one year inflation rates for US and advanced economies ex-US, in %. Source: Federal Reserve Board, Wu-Xia, and BLS via FRED, and Dallas Fed.

There is an obvious correlation between real rates and the real dollar, as there should be according to certain theories. I estimate the long run relationship using the Johansen maximum likelihood method, assuming a dterministic trend in the data. This yields the following estimate of the cointegrating vector:

where i is the shadow Policy rate, and π is the inflation rate. The null of no cointegrating vectors is rejected at the 10% msl using the trace statistic. The coefficients are not inconsistent with a real interest differential/overshooting model of the exchange rate; a coefficient of 5 on the interest differential is consistent with a rate of price adjustment of 20%, and an interest semi-elasticity of money demand of about 7. See Chinn and Meese (1995) for discussion of a priori values for cointegrating relations).

I might note that while uncertainty and risk is not included in the estimates, a surge in emerging market crises could very well exacerbate a dollar appreciation (consider the dollar in the wake of the 1990’s East Asian crises). And we know such crises tend to follow episodes of US monetary tightening (see discussion in Aizenman et al. 2015, 2016).

Hence, I do not anticipate a drastic shrinkage of the trade deficit (in the absence of a recession), nor do I expect a manufacturing renaissance despite the imposition of potentially punitive tariffs, given the development of extensive global value chains.