But maybe Walker in the henhouse.

From the Legislative Fiscal Bureau, the Memorandum of Understanding between Wisconsin and Foxconn states:

…Foxconn agrees to invest $10 billion to construct, over six years, a facility in Wisconsin and create up to 13,000 jobs, with a reported average salary of $53,875 over a period of up to six years. The state’s agreement, under the MOU, among other things, is to provide up to $3 billion in an economic package which would include refundable tax credits and a construction sales tax exemption for Foxconn.

What is the benefit cost calculation for the state’s taxpayers? To undertake the analysis, one would need to make a set of assumptions; these include:

[Wisconsin Department of Administration] projects that the cost of the refundable state tax credits under the bill will exceed the potential increased tax revenues until the last EITM payroll credit is paid in fiscal year 2032-33. As of the end of that year, the cumulative net cost of the incentive package is estimated at $1.04 billion. Beginning in 2033-34, payments to the company would cease and increased state tax collections are estimated at $115 million per year. DOA estimates that the project’s break-even point would occur during the 2042-43 fiscal year.

In Figures 1 and 2 below, I summarize state payments and revenue increases, and net benefits flow and cumulation, respectively. The astute will note that state payments is front loaded into the first 15 years (after which Foxconn could walk away), and that even under the fairly optimistic assumption of 13,000 additional jobs, the break-even occurs in FY 2042-43. 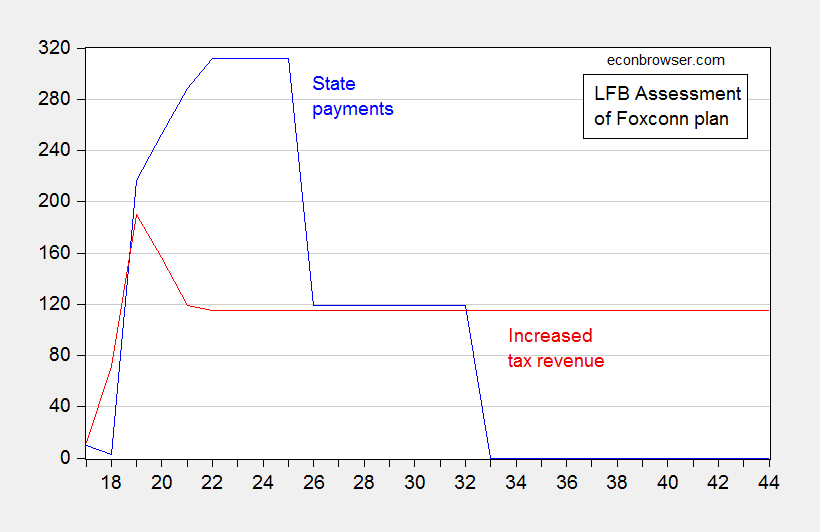 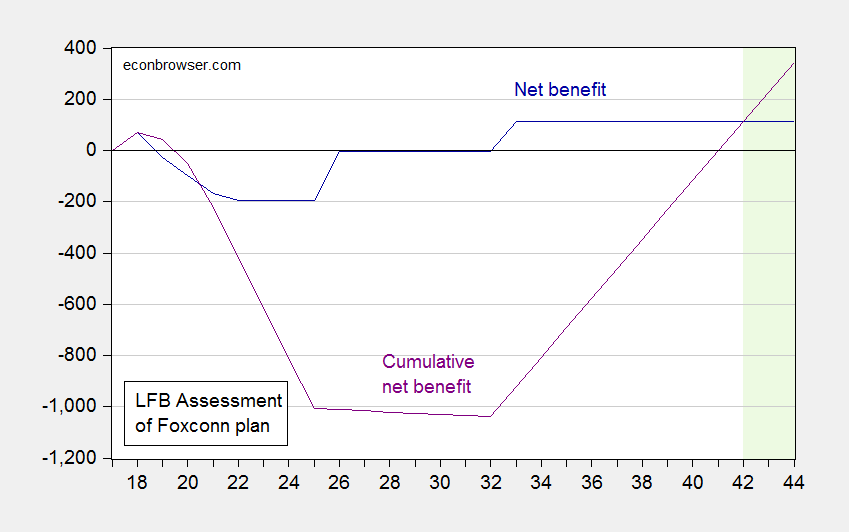 As noted, there is wide uncertainty over the increase in employment. LFB blandly observes:

There have been press accounts suggesting that employment at the proposed facility would be closer to 3,000 instead of 13,000 permanent positions. If this were the case, using the other assumptions outlined above, payments of the EITM payroll tax credit would be reduced from just under $1.5 billion to approximately $345 million over the 15-year life of the EITM zone, but the capital expenditure credit would still be estimated at $1.35 billion. The estimated ongoing tax benefits from the project would decrease from $115 million to $27 million per year, and the breakeven point would be well past 2044-45.

There is a serious question of whether Foxconn will fulfill its commitments. Hiltzik at LA Times highlights the 2013 Pennsylvania deal.

Foxconn itself is getting a reputation for making lavish promises and letting them lapse, as appears to have been the case with a project the company touted for Harrisburg, Pa., in 2013. That deal was for a $30-million plant employing 500 workers. But the plant hasn’t materialized.

And from Wisconsin Gazette:

n the midst of all the jubilation and hype, it’s important to remember that Foxconn has earned a reputation for failing to meet its pledges. The business publication Crain’s warns, “Foxconn Technology Group … has a history of big promises with little to no payoff in the United States.”

Foxconn abandoned the commitments it made to Harrisburg, Pennsylvania, where CEO Terry Gou promised that its small 50-person operation would be expanded into a manufacturing facility with 500 workers. Its announcement generated an “intense buzz” that was “created by a chief executive known to promise projects all over the world that never quite pan out,” The Washington Post reported.

Promises of new or expanded investment by Foxconn also have been broken in Brazil, China, India, Indonesia and Vietnam.

Bloomberg News noted that Foxconn’s total commitments now stand at $27.5 billion, which is more than Hon Hai has spent in the past 23 years.

The fact that this venture does not seem to be a big positive for Wisconsin seems to match the literature that indicates state tax incentives to relocate businesses do not typically have big payoffs. From a survey by Buss (2001):

Tax literature, nowin hundreds of publications, provides little guidance to policy makers trying to fine-tune economic development. Taxes should matter to states, but researchers cannot say how, when, and where with much certainty. Firms may need tax incentives to increase their viability in some locations, but researchers cannot definitively say which businesses or which locations.

Question: Will we be watching LCD tv screens in 27 years?

12 thoughts on “Not Foxconn in the Henhouse”