So we’re back to this again? From CNN:

“They can pay for it indirectly through NAFTA,” Trump said Thursday in an interview with The Wall Street Journal. “We make a good deal on NAFTA, and, say, ‘I’m going to take a small percentage of that money and it’s going toward the wall.’ Guess what? Mexico’s paying.”

I must confess some confusion as to exactly where the money is to come from:

But Trump has also previously suggested that he would seek indirect payment from Mexico to fund the wall. His latest assertion suggested he would direct a surplus in revenue from improved trade with Mexico toward paying for the wall — though he did not lay out a mechanism for doing so. [emphasis added]

The fact that the bigger trade surplus is going fund the wall is strange — does that mean he’ll expropriate some of the export revenue. That sounds like an export tariff (which is not WTO compliant). Or is he confusing trade export revenue with government budget revenue, as in this case? For now, I’ll just discount this statement as mere confusion.

So let me assume he means by “better deal” higher tariff rates. I’ll reprise this analysis from February.

First consider the canonical analysis, where the US is considered a small country (in the context of US-Mexican trade):

The tariff t raises the price faced by US consumers, producers, by the entire 4% of the tax. The resulting deadweight (efficiency) loss is the pink area in panel (b). Let’s put some numbers to the graph.

US imports of goods and services from Mexico was $316.4 billion in 2015. If the US exits Nafta, the tariff rate reverts to MFN/NTR rates of about 4%, and the price elasticity of imports is 3.8% (Spearot, 2015, Table 2), then imports fall by $44.6 billion. Consumption side and producer side deadweight loss is about $0.9 billion, while tariff revenues equal $10.9 billion. In this depiction, the entire tax burden is borne by US consumers.

A more realistic interpretation is to assume the US and Mexico are roughly equal size (in trade, not GDP, terms). This is depicted in Figure 2. 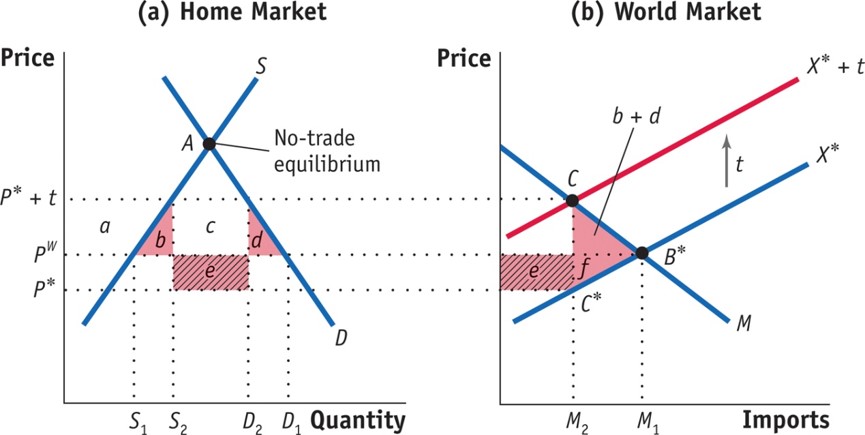 For simplicity, assume supply and demand elasticities are the same, so half the incidence of the tax falls on the US, half on Mexico. Then import prices rise by 2%.

Imports fall from $316.4 billion to $294.1 billion. Tariff revenues are $11.8 billion; $5.9 billion of the tariff revenue is borne by US consumers. There is a terms of trade gain to the US, since we force Mexico to sell its goods to the US at a lower price.

“So-called President” Trump has suggested at various instances a 35% tariff. This would drive down imports to $163.2 billion. Total tariff revenues are $57.1 billion — more than enough to pay for building the wall (at $12-$40 billion). Of this amount, $28.6 billion is from American consumers.

All of this is mostly an illustrative exercise. It’s also important to recall that it’s a partial equilibrium exercise. GDP effects are not incorporated (both Keynesian and supply side). Nor are financial side implications, such as the impact on capital flows and exchange rates. And obviously, retaliation is not accounted for…
One important subtlety: the analysis presumes final goods; but possibly 40% of US imports from Mexico are intermediate goods.[1](p.6). Then it’s important to remember negative ERPs.

So, to recap — assume $18 billion is the cost oif the wall (estimates range to $40 billion), then it takes at least 3 years of tariffs at MFN levels to get the requisite funds from Mexico. Along the way, Americans pay higher prices to the tune of about $6 billion a year. And that’s assuming no retaliation that would reduce US exports to Mexico…

I expect more ideas to emanate from the Administration (we’ve gone through transfers fee, visa fees, border tax, tariff, etc.). Here is what the Trump campaign proposed, in Pay for the Wall:

Introduction: The provision of the Patriot Act, Section 326 -the “know your customer” provision, compelling financial institutions to demand identity
documents before opening accounts or conducting financial transactions is a
fundamental element of the outline below. That section authorized the
executive branch to issue detailed regulations on the subject, found at 31 CFR
130.120-121. It’s an easy decision for Mexico: make a one-time payment of $5-
10 billion to ensure that $24 billion continues to flow into their country year
after year. There are several ways to compel Mexico to pay for the wall
including the following:

Conclusion: Mexico has taken advantage of us in another way as well: gangs,
drug traffickers and cartels have freely exploited our open borders and
committed vast numbers of crimes inside the United States. The United States
has borne the extraordinary daily cost of this criminal activity, including the
cost of trials and incarcerations. Not to mention the even greater human cost.
We have the moral high ground here, and all the leverage. It is time we use it
in order to Make America Great Again.

45 thoughts on “Making Mexico Pay for the Wall (Redux)”