With Robert Lighthizer going to USTR, it’s useful to remember that he was “implementer” of many VER’s, or “Voluntary Export Restraints” on steel imports, during his last stint at USTR during the Reagan Administration.

I’m about to teach a course in international trade policy (see last year’s course), and in just about any trade textbook, one will find VER’s as one of the pernicious policy tools in the pretty bad looking toolkit of trade policies. A VER acts like an import quota, but instead of the quota rents going to domestic agents entitled to import the restricted goods, the rents go to the foreign producers. So, if for example, we slap a VER on Chinese steel, Chinese steel producers get the rents. This is shown in Figure 1. Assume the US is a small country for this market. Then the VER restricts imports so the US market price rises from the world price. 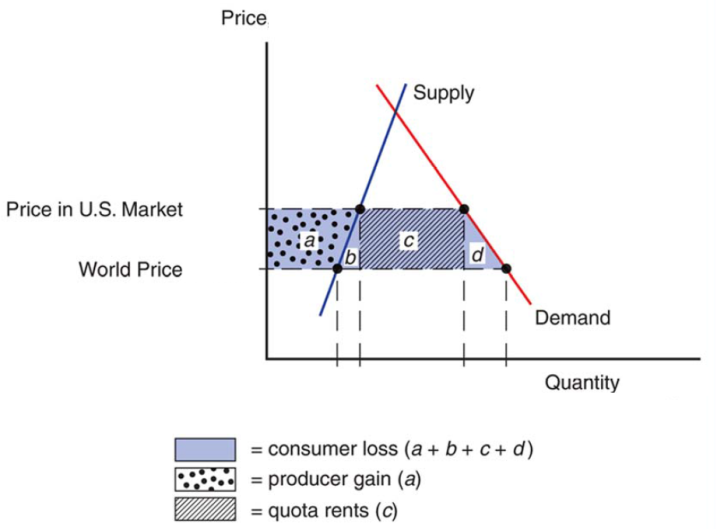 For an import quota, consumer surplus is reduced by the blue area (a+b+c+d), producer surplus increases by dotted area (a), and so b and d are producer and consumer side dead weight loss. The cross-hatched area (c) are quota rents accruing to whoever has the right to import the restricted good. With a VER, the rents accrue to the foreign producer. Watch for this ostensibly “get tough” policy to re-appear. Like many seemingly tough policies, they are actually just plain stupid.

Ironically, one of my first research projects as an undergraduate research assistant was to study the effect of the Japan VER on the prices of imported Japanese cars. Some of the results made it into The Policy Game (written by Peter Navarro). One set of estimates (Feenstra, QJE, 1988) is $1100 quota-rent-induced price increase on a counterfactual free trade price of $5300 in 1985. (It happens my first research assistant project after graduating was also on VERs — so my preferred number is $2400 including both quota rents and quality upgrading — see Crandall (1987)).

For estimates of the costs of protection, like the ones the President Elect Trump’s trade team might be thinking of, see this “golden oldie” from the FTC (Tarr and Mokre, 1984); also general equilibrium estimates (de Melo and Tarr, 1988, published REStat, 1990).

An effective rate of protection (ERP) calculation takes into account the fact that domestic value added might be less than total value added – i.e., there is substantial imported value added in the final good. Suppose a 10% tariff is applied to autos, so that a totally US made auto which originally sold for $50000 (under free trade) can now sell for $55000 because of the protection from foreign imports. In this calculation, effective protection equals nominal, i.e., 10%. However, suppose imported inputs used in cars were $30000. Then the effective rate of protection is 25% (=(25000/20000)-1).

Perhaps even more important, suppose instead a 10% tariff is applied to the imported inputs into automobiles. Then the effective rate of protection is -15% (=(17000/20000)-1). To redress this negative rate of protection, the protection on inputs would have to be coupled with a 6% nominal tariff. The more pervasive vertical specialization (i.e., more specifically, the greater the share of imported components), the more prominent this problem.

And that’s a final good tariff just to even out things domestically. If you want to export the autos, well, you’ll need an export subsidy. Under current WTO agreements, those are generally illegal.