Suppose you (the UK) are in a tariff-ridden world, getting butter from your former colony and current Commonwealth partner New Zealand, the global low cost producer. Then you (the UK) decide to join a customs union that encompasses Denmark, which produces butter at a lower cost than the UK, but higher than New Zealand. In plain words, the tariffs between UK and Denmark on butter go to zero, while those between UK and NZ remain.

Is the UK better or worse off? 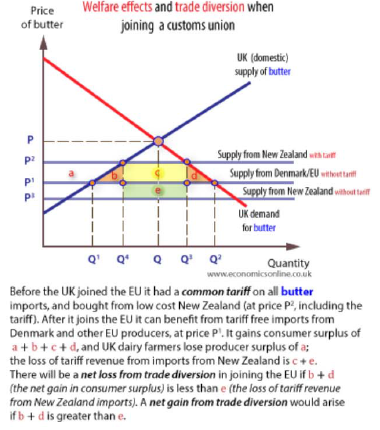 There is always a gross loss from trade diversion unless the global low cost producer is in the customs union. The question is the net effect.

Is the home country better or worse off than before? This is an empirical question. If areas b and d sum to less greater than that of e, then benefits of trade creation exceed that of costs of trade diversion, and vice versa. (Assuming the marginal utility of a dollar to producers and consumers is equal, as is usually the case in simple welfare analysis.)

I never thought I’d have to explain this, but apparently I do, because of this comment:

…trade diversion was being presented as bad and due to the current ZTE sanction/tariff actions, but trade diversion has many other causes (taxes, sanctions, political changes, trade agreements, etc.) and is not necessarily bad. What amazes me is the the lack of understanding of the bigger picture surrounding Trump’s actions. Negotiation leverage may be manufactured and alleviated when needed.

Trade Diversion, a 1950s term/finding, was coined before the major implementations of the VAT. It assumes efficiency of production of products naturally means lowest price for products and subsequent purchases of them in international trade. The VAT changed that assumption. There are far more changes that impacted international trade since the 50s. It is, therefore, more difficult to determine the negative impacts of Trade Diversion on “NATIONAL” economies today than in the 50s.

The specific reference is Jacob Viner, “The Customs Union Issue” (1950).

If the US imposes sanctions on China and the rest of the world is in a global free trade area with the US (that is the idea of a WTO), and China is the low cost producer of, say, carpet sweeper parts, it may very well be the case the benefits outweigh the costs. It depends.

To my knowledge, imposition of a VAT does not change the analysis. In fact, all it does is make the relevant costs inclusive of taxes and fees. One might as well say the presence of sales taxes invalidates the trade creation/trade diversion analysis. (In point of fact, I suspect that since a VAT is typically less distortionary than other taxes, the idea of VATs invalidating the analysis makes the least sense — but I’m not an expert on this issue, so I leave to others to debate).

I could see that the development of global value chains might impact the standard analysis. However, to the extent that rules of origin along with content requirements are in force, I don’t see how.

52 thoughts on “Things I Never Thought I’d Have to Explain on Econbrowser: Trade Creation/Trade Diversion”