That’s a new article at the outstanding web portal VoxEU, coauthored by Matthieu Bussière, Menzie Chinn, Laurent Ferrara, and Jonas Heipertz, and based on this paper:

The ‘Fama puzzle’ is the finding that ex post depreciation and interest differentials are negatively correlated, contrary to what theory suggests. This column re-examines the puzzle for eight advanced country exchange rates against the US dollar, over the period up to February 2016. The rejection of the joint hypothesis of uncovered interest parity and rational expectations still occurs, but with much less frequency. In contrast to earlier findings, the Fama regression coefficient is positive and large in the period after the Global Crisis, but survey-based measures of exchange rate expectations reveal greater evidence in favour of uncovered interest parity.

Under the joint hypothesis of uncovered interest parity (no exchange risk premium) and rational exepctations, the probability limit of the estimated β coefficient should be one, as shown in the gray line. The following chart summarizes the switch in Fama regression coefficients from the pre- and post-crisis periods. 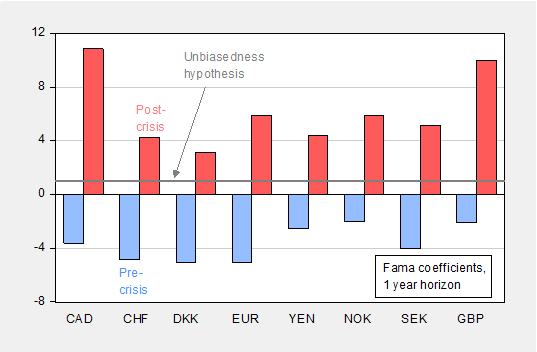 Using survey data, we find that the switch occurs largely because of the change in the correlation of expectations errors and the interest differentials.

The sample covered in our paper ends in 2016M02 (so the last one-year interest rate used is 2015M02, last three month interest rate is 2015M09). One might wonder whether the results persist into the post-Zero Lower Bound period; for at least the euro-dollar exchange rate, they do, as documented in this post.

For results pertaining to other cross-rates (e.g., euro-pound), see this post.