Two points from the 2018Q2 2nd release: GDO is smoother, and a breakout has not yet appeared. While the quarter-on-quarter GDP growth is high, it’s not unparallelled (see discussion in this post). In addition, GDO, which has shown itself to be a better predictor of revised values of GDP, indicates less rapid growth (see Justin Fox’s article today).

Second, returning to GDP, is there evidence of a breakout in growth? Consider recursive one-step-ahead regression residuals. OLS regressions

are estimated recursively (i.e., the sample is progressively augmented after a starting sample) over the Great Moderation period, 1986-2018, and a test applied to see if the residual from the one-step-ahead forecast looks like it comes from a different distribution (the null hypothesis is same distribution). 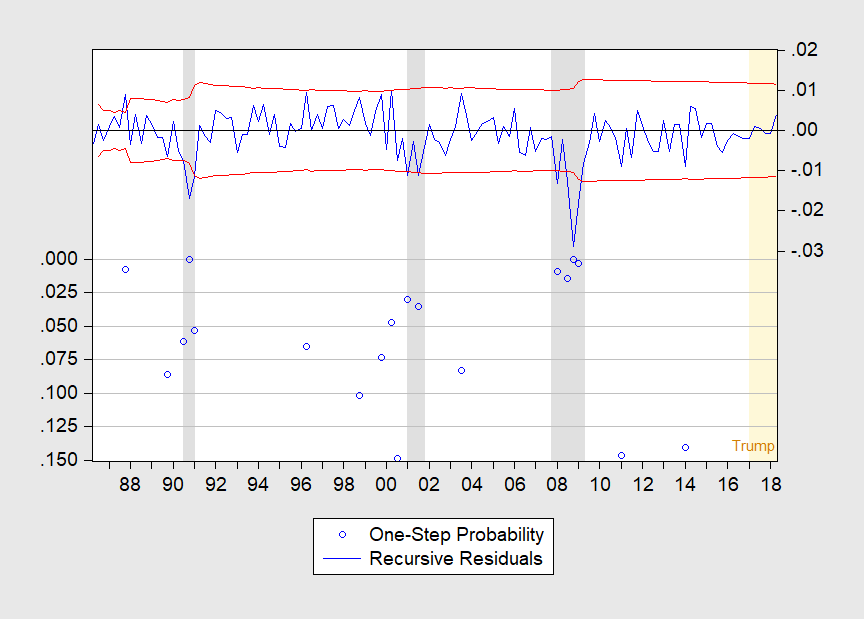 As indicated in the graph, no break occurs after the Great Recession. These results are robust to another specification (ARIMA(1,1,0)), except a structural break is found in early 2014 (at the 10% msl).

I will say I won’t be surprised to see breaks in the future, particularly with volatility in the net export series likely due to both trade measures and the accounting effects of the TCJA.

6 thoughts on “Thinking about that Surge in Growth”