Following up on Jim’s post on the GDP release, here are four observations.

Over the past 11-1/2 years, there have been several instances of q/q growth exceeding 4%, and many exceeding 3%, including during the Obama years. 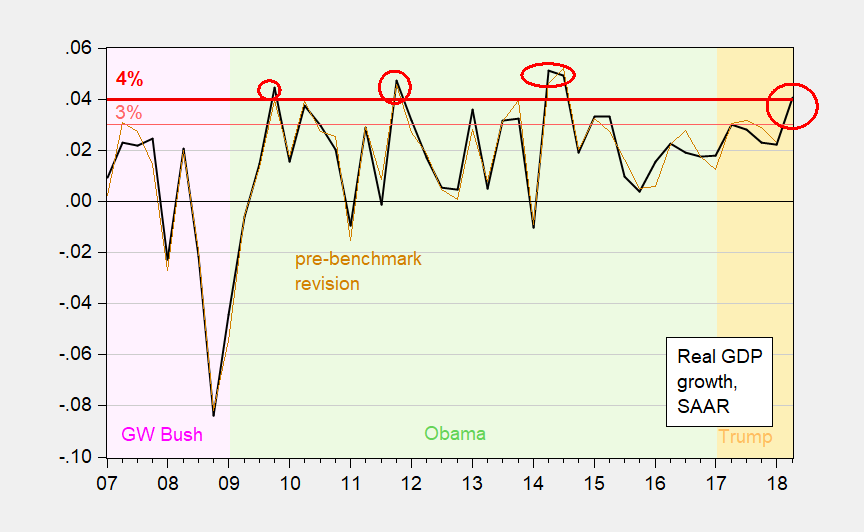 Indeed, over the Great Moderation (1986 onward), we’ve seen many instances of over 4% q/q growth, as shown in the below histogram.

On a year-on-year basis, there were several instances of growth exceeding 3% over the past decade-plus, including during the Obama years. 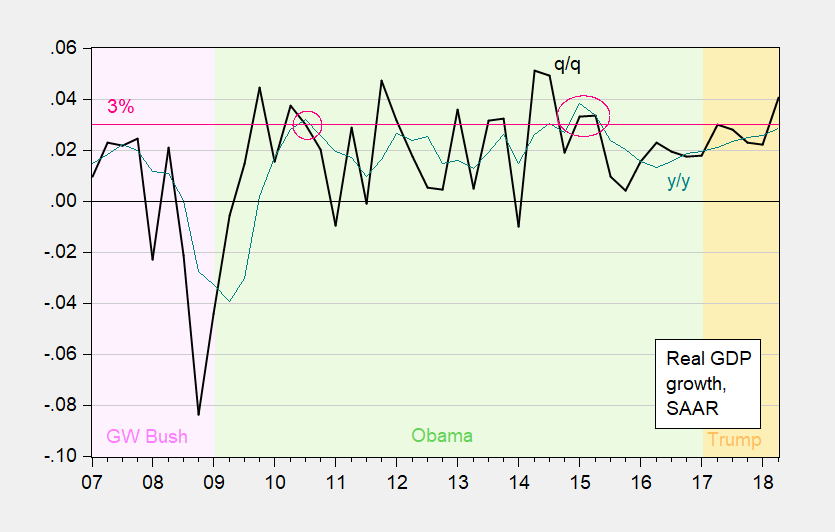 Note that even with this growth surge in 2018Q2, growth under Trump has not yet breached 3% on a quarterly y/y basis…

The Mnuchin prediction of growth in excess of 3% for several years is actually in the Administration’s forecast. One can see how much of a divergence there is between the Troika (CEA-OMB-Treasury) and CBO (April) projections in the figure below. 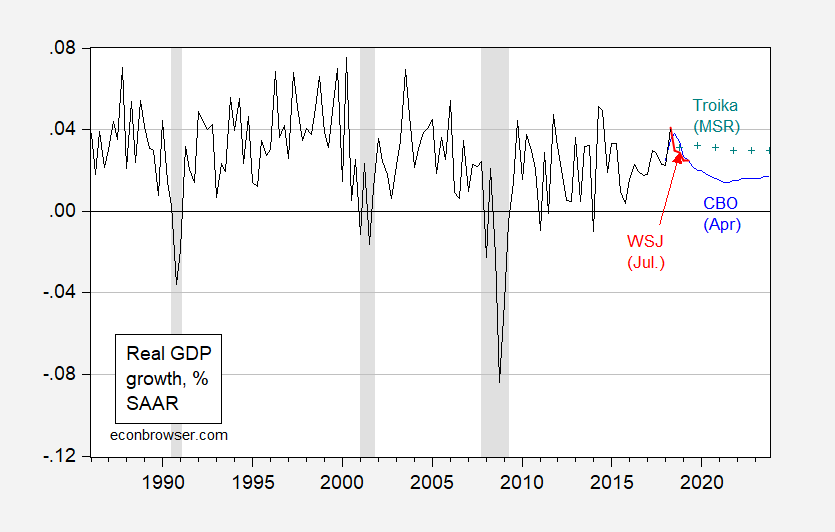 The Administration scenario was dubious when I last looked at in April. It still is.

However, if one were to look at where one might think investment related to the tradables sector (e.g., manufacturing) were to be showing effects from trade policy uncertainties, one might think of industrial and transportation equipment. Both are down, but the former more profoundly: 5.6% q/q at an annualized rate. 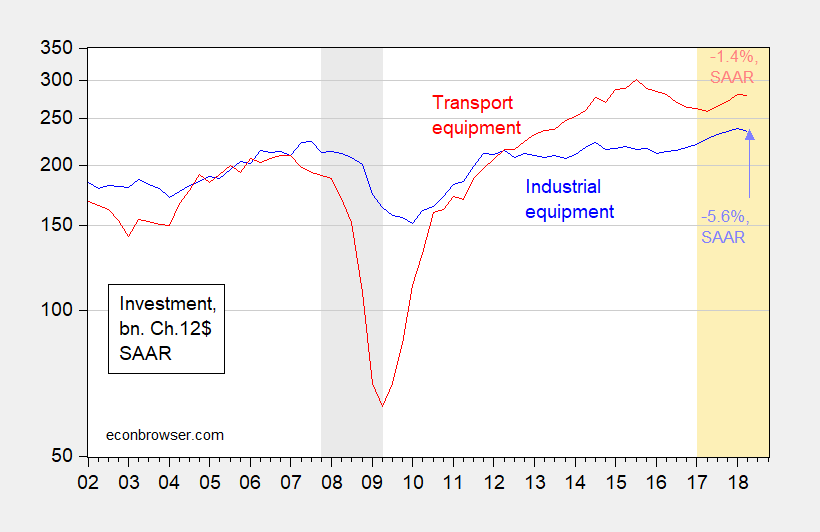 To the extent that investment is a forward looking indicator, and susceptible to economic and policy uncertainty, this series does not augur well for the sustainability of the growth spurt.

It’s important to remember that measurement of an economy as complex as that of the United States is challenging. There is a continuous stream of incoming data which eventuates — sometimes substantial — revisions. For instance, as of September 26, 2008, 2nd quarter GDP q/q growth had recorded a respectable 2.8% annualized rate. Even after the Lehman collapse, the October WSJ forecast for Q4 q/q growth was -1.2%. As of October 30, 2008 the 3rd quarter growth advance estimate was for -0.2% annualized growth rate. In the end (as of the last annual revision), 3rd quarter growth was -2.1%. 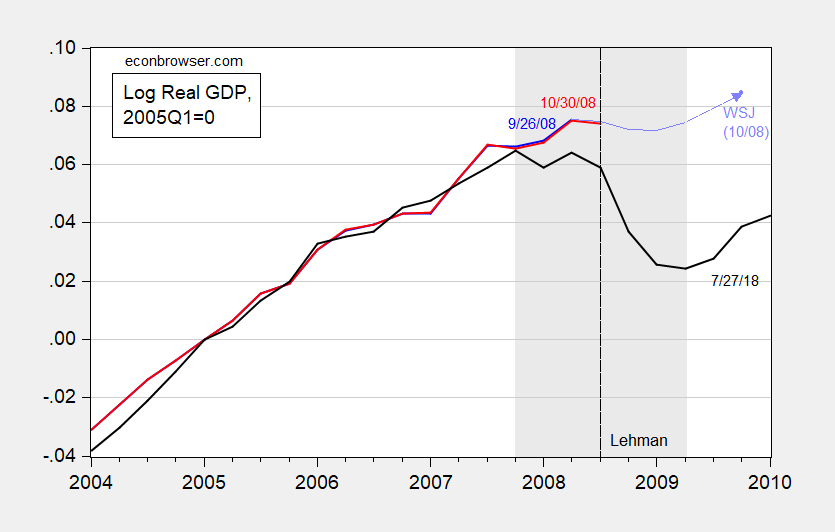 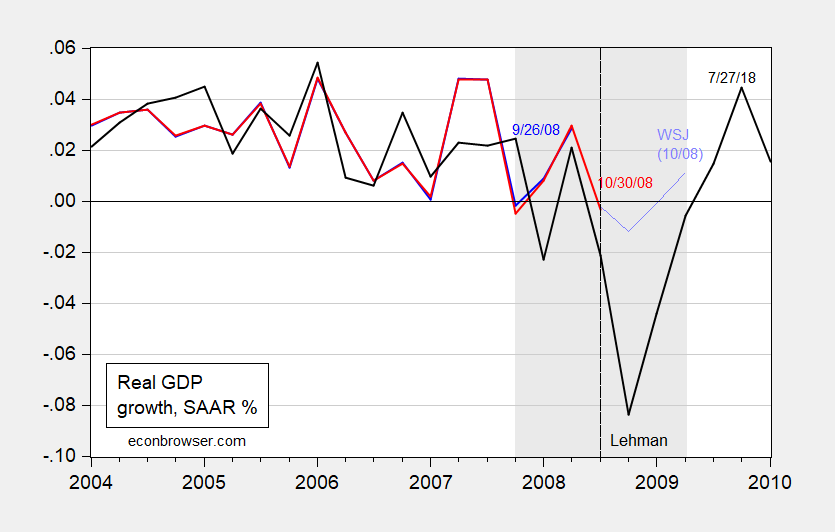 None of the foregoing should be construed as asserting that we are currently in a recession; rather one can creep up much faster than one might think, particularly with the term spreads (10yr-3mo, 10yr-2yr) shrinking. So, rejoice today, for for tomorrow… who knows.