That’s how an unidentified White House official characterized the impact of closing the southern border.

“It’s something that I’m sure we’ll be looking into and studying,” Kevin Hassett, the chairman of the Council of Economic Advisers said on Monday…”

In some senses, the trade linkages between US and Mexico do not seem to loom large: 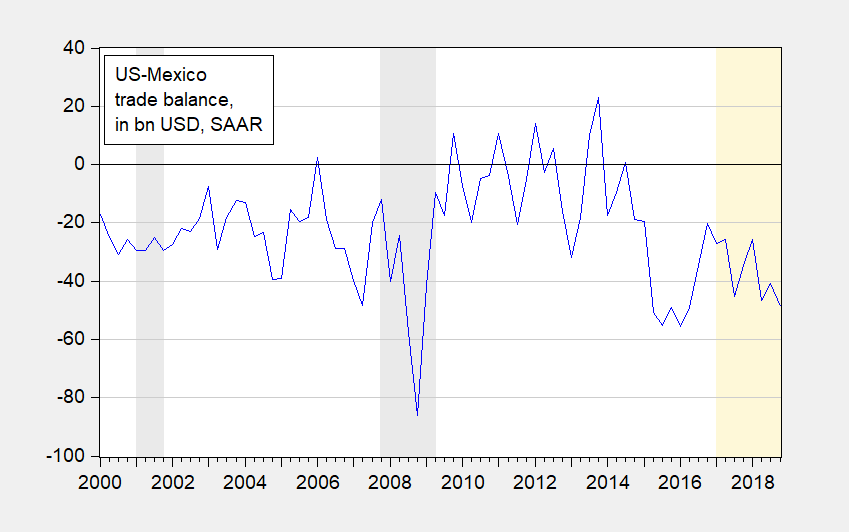 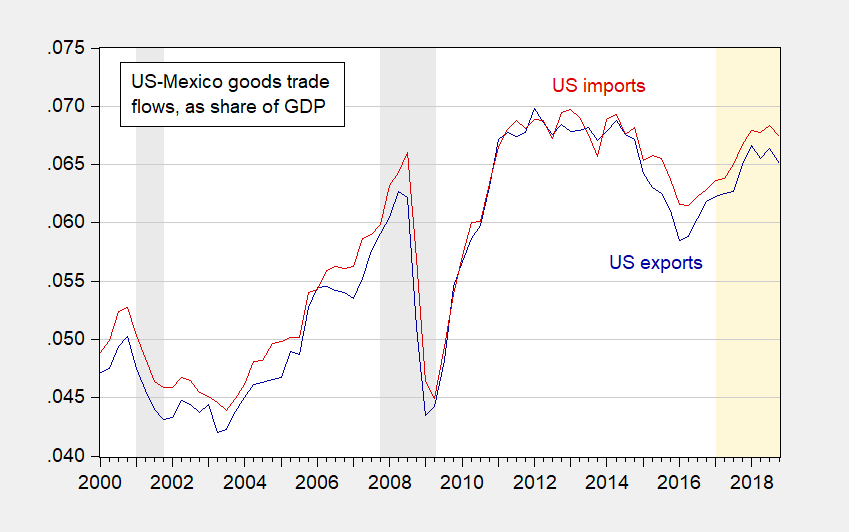 Even if the trade deficit is relatively small (in fact it’s possible the value-added balance is positive), the trade flows themselves are quite large, even as a share of GDP. Moreover, these quantitative measures understate the importance of Mexican trade. As the Congressional Research Service has noted:

A significant portion of merchandise trade between the United States and Mexico occurs in the context of production sharing as manufacturers in each country work together to create goods. Trade expansion has resulted in the creation of vertical supply relationships, especially along the U.S.-Mexico border. The flow of intermediate inputs produced in the United States and exported to Mexico and the return flow of finished products greatly increased the importance of the U.S.-Mexico border region as a production site. U.S. manufacturing industries, including automotive, electronics, appliances, and machinery, all rely on the assistance of Mexican manufacturers.

This graphic (Bloomberg, 2017) illustrates the reliance on intermediate inputs in the North American production platform.

This makes me pity the poor CEA staff economists that have been tasked to determine the macro impact of a border closure. My closest experience is trying to evaluate GDP loss in California arising from rolling blackouts, in 2001. I guess if I was tasked to evaluate the impact, I’d extrapolate to the 2011 Great Tohoku Earthquake which distrupted the East Asian supply chain, as well US auto production.

On a more mundane note, we would run out of avocados in three weeks.

200 thoughts on “Empirically Assessing “a whole world of hurt””