The recent threat of a trade war between US and China has brought trade policy uncertainty (henceforth TPU) to the forefront of the economic and policy debate. A substantive empirical literature has analyzed the effects of TPU on employment, international trade, investment, and welfare. While this literature has focused on the impact of TPU on economic outcomes, it has remained silent on its effect on asset prices. Given the relevance that stock prices have for firms’ investment decisions, household wealth, and employment, studying how financial markets respond to TPU deserves further scrutiny.

In new research (Bianconi, Esposito and Sammon 2020), we document that TPU is a systematic risk factor priced by asset markets.

Since the fundamental work of Bernanke (1993), it is well-known that macro-level economic uncertainty can decrease investment. Davis (2018) has clearly highlighted the negative investment effects of the current administration’s recent trade-policy uncertainty. Academic research on the effect of TPU on economic outcomes has been vibrant, e.g. Handley and Limão (2015) and Pierce and Schott (2016), among many others.

Under the current COVID-19 pandemic, the impact on asset prices has been dramatic, e.g. Baker et al. (2020). There is substantial uncertainty about when the economy will re-open and how trade relations will change as the economy returns to normal. Uncertainty about future tariffs could affect investors’ expectations of future performance and risk. These changes in risk affect firms’ stock returns, which are an important determinant of household wealth, firms’ value and investment decisions, e.g. Davis et al. (2006). We find robust empirical evidence that TPU affects both the mean and volatility of U.S firms’ stock returns, as investors demand a 6% risk premium for holding stocks exposed to possible policy changes. In short, investors demand compensation for the risk associated with future policy changes.

Our empirical results are based on the uncertainty arising from annual votes by Congress to revoke China’s ‘‘Most Favored Nation’’ (MFN) status between 1990 and 2001. Starting in 1980, U.S. imports from China were subject to the relatively low Normal Trade Relations (NTR), or equivalently MFN tariff rates reserved for WTO members, even though China was not a member of the WTO. This required annual renewals by Congress, were essentially automatic until the Tiananmen Square Massacre in 1989. Starting in 1990, NTR renewal in Congress became more politically contentious, with the House passing resolutions against Chinese MFN renewal in 1991 and 1992. Had NTR status been revoked, tariffs would have reverted to the higher non-NTR rates, established under the Smoot Hawley Tariff Act of 1930. The uncertainty about substantial U.S. import tariff increases on Chinese goods ended in 2001, when the US granted China ‘‘Permanent Normal Trade Relations’’ (PNTR), which eliminated the need for annual votes on MFN renewal.

We follow Pierce and Schott (2016) and quantify the heterogeneous exposure to policy uncertainty via the “NTR gap,” defined as the difference between the non-NTR rates, to which tariffs would have risen if annual renewal had failed, and the NTR rates. A first important empirical stylized fact we uncover is in Figure 1 below. U.S. tradeable industries more exposed to trade policy uncertainty experienced significantly higher stock returns than less exposed industries in the 1990-2001 period.

We confirm the pattern shown in the picture with a differences-in-differences specification, that controls for industry-time variation in firm fundamentals, and other contemporaneous US-China policy changes, such as the global Multi-Fiber Arrangement (MFA) and China’s accession to WTO. The difference in average returns for high and low NTR gap industries is significant at the 1% level. We further show in Figure 2 that the positive association between the NTR gap and stock returns was significant throughout the entire 1990-2001 period, but it was stronger in the first years of the decade. This is consistent with our premise that there was greater uncertainty about the legislation passage in the years 1990-1992, as suggested by the fact that in those years the House voted in favor of revoking NTR status to China.

We then argue that the higher average returns earned by more exposed sectors can be explained by a risk premium for exposure to TPU. Intuitively, during the TPU period, investors required additional compensation to hold stocks with exposure to this policy uncertainty. We show that a value-weighted portfolio, long high-gap industries and short low-gap industries, had average excess returns of 6% per year, over the 5 factors in Fama and French (2015), during the uncertainty period 1990-2001. Our portfolio’s excess return remains statistically significant after controlling for the globalization factor constructed in Barrot et al. (2019), which uses industry-level shipping costs to proxy for exposure to globalization. This means that TPU was a systematic factor that could not be diversified away and could not be explained by exposure to globalization. Moreover, the risk premium was concentrated in industries with lower NTR tariff rates, and higher share of inputs expenditures from China. This suggests that exposure to globalization amplifies the effects of trade policy uncertainty and thus the associated risk premium.

Lastly, in Figure 3 we document a large and significant drop in stock prices for industries with higher NTR gaps around the day in which the policy uncertainty reasonably began, i.e. the day when the first resolution to revoke NTR status was proposed at the House, on 07/23/1990. This is consistent with an increase in the discount rate due to higher uncertainty on future policies that depressed prices of more exposed industries, as in Pastor and Veronesi (2012). 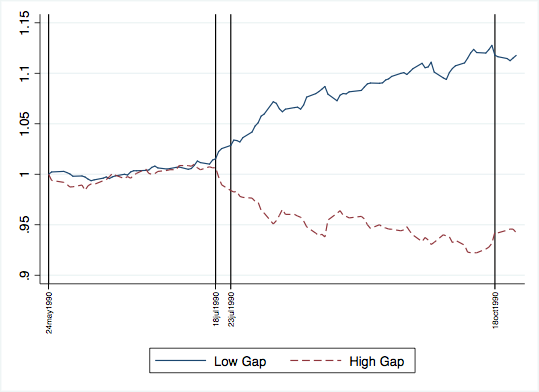