The below is a republication of a post from July 19, 2019 entitled “What Does Judy Shelton Believe GDP Growth and Inflation Are in 2019?” in response to Senate Majority Leader Mitch McConnel’s invocation of cloture on the nomination of Judy Shelton to the Federal Reserve Board of Governors.

In a 2015 Cato Institute session, Fed Board Nominee Judy Shelton discusses whether to trust or not official GDP and inflation statistics (she says no — see 1:07:07) (h/t Sam Bell).

This makes me wonder (1) what is the basis for her beliefs, and (2) what would she use that is different.

Let’s consider inflation, presumably CPI inflation. One recent innovation is the Billion Prices Project’s price value indicator (see Jim’s post on this subject). For the US, the comparison against the official CPI series is depicted below.

With both series rescaled to July 2008, the price levels are virtually the same at July 30, 2015, the day of Dr. Shelton’s speech. It might be that Dr. Shelton is consulting Shadow Government Statistics; if so, I hope she will immediately cease and desist (per discussion by Jim Hamilton, and subsequent “debate” with  ShadowStats’ John Williams).

What about GDP? Well, here she might be on slightly firmer footing, although it leaves open the question of what would be a better indicator of total economic activity. In point of fact, with revisions based upon more detailed data, GDP was actually 1.6% higher than estimated in 2015Q2 (she had access to an advance estimate of GDP as of 30 July 2015). I suspect her view at the time was that reported GDP was lower than actual economic activity… 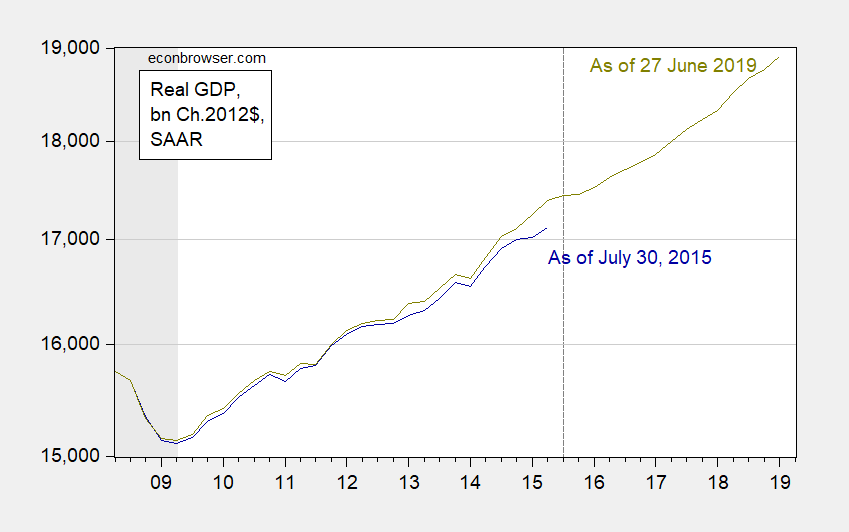 How about alternative indicators to GDP. Well, there are numerous, but they usually aim at detecting cyclical fluctuations in advance (CFNAI, monthly GDP from Macroeconomic Advisers, etc.). [As an aside, an interesting high frequency measure recently developed is described here, and compared to Aruba-Diebold-Scotti.] I suspect that Shelton is uninterested in this high-frequency/cyclical aspects, and more in the trend. Here, I compare the July 2015 and latest vintage of GDP measures, plotted against the Philadelphia Fed coincident indices of comparable vintages. 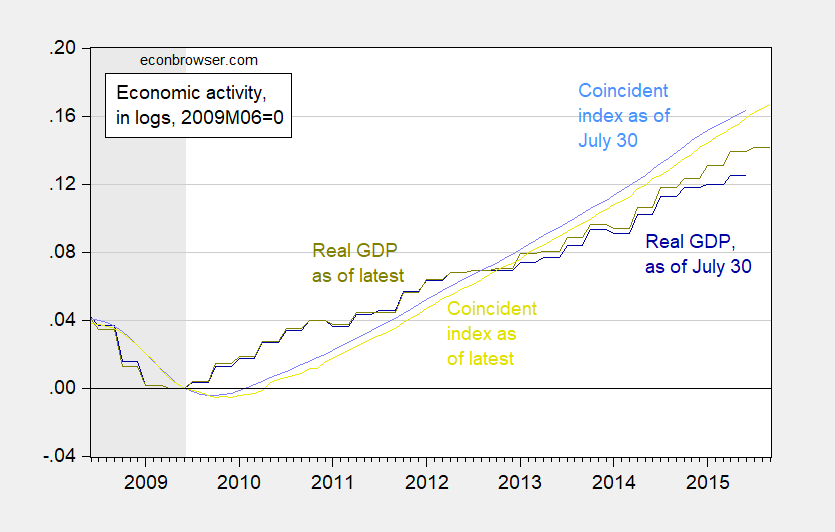 Note that the advance GDP release available to Shelton in 2015 understated real GDP as we understand it in 2019. The coincident indices also suggest that economic activity is higher than indicated by GDP, although given the normalization on end-of-recession (June 2009), the gap is only 2% in log terms, using the latest vintages.

So, we are left with wondering exactly what Dr. Shelton believes those key price and activity variables that the Fed follows (technically, it’s PCE deflator rather than the CPI, but you get the idea). Of course, if as indicated elsewhere, she wants the price of gold as a nominal anchor, this discussion is moot — and she’s just a data-conspiracy crank like so many others.

I will also say that if she plans to implement retaliation for currency manipulation by other countries, she had better figure out what variables to look at, and whether they are measured correctly (here I think there is room for debate, although I think she would say if another country pegs its exchange rate, its prima facie evidence of manipulation).

34 thoughts on “A Public Service Announcement: Judy Shelton Does Not Believe in US Government Statistics”