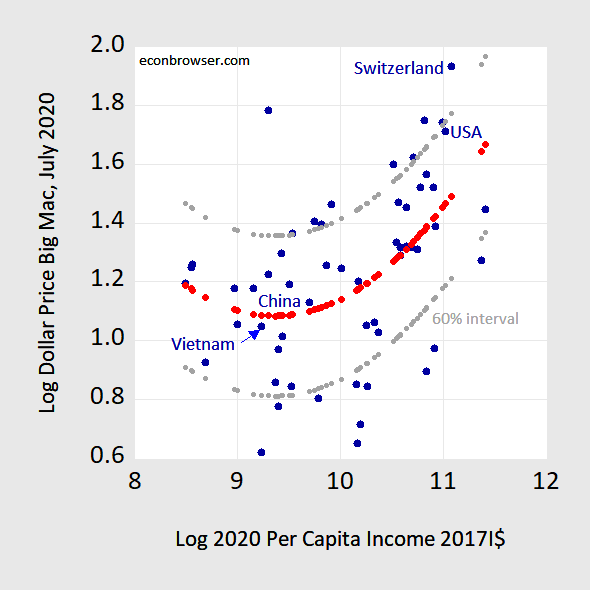 Clearly, if one used simple purchasing power parity (PPP),  one would find massive undervaluation for the Vietnamese currency, massive overvaluation for the Swiss franc. However, as is well known, PPP — the proposition that the price of an identical bundle of goods should have the same price when expressed in a common currency — does not generally hold. That’s obvious to the tourist  traveling to a variety of countries at very different levels of economic development.

Hence,  I rely on the “Penn effect” which implies that a proper assessment of currency misalignment should consider the country’s per capita level of income, as highlighted in my survey for the Oxford Research Encyclopedia of Economics Finance. (A recent blogpost, using relative prices/relative incomes, and quantile regression, is here.) The nonlinear specification is due to Hassan (2016), and shown by the red dots.

The prediction interval (60%, gray dots) indicates that there is some imprecision regarding whether the US dollar is truly overvalued, whether the Vietnamese dong is undervalued, relative to a multilateral assessment of the best fit estimate of the relationship. The results suggest that if one is using Big MacParity accounting for income levels, then Trump should really be pursuing… Russia, Ukraine and South Africa.

Jason Furman and Joe Gagnon discuss the wrong-headedness of designating Vietnam a currency manipulator (separate from the issue of currency misalignment or undervaluation). See also Mark Sobel on who might better fit into the manipulator category.

The raw Big Mac data is here. (And for a deeper analysis of MacParity, see David Parsley and Shang-Jin Wei’s incredibly thorough piece on the subject in 2007 Economics Journal; ungated version: A Prism into the PPP Puzzles.)