Here is a graph of two spreads oft-cited: (1) a term spread, the 10 year-3 month spread, and (2) a spread between a nominal rate and a real rate, the 10 year Treasury yield and 10 year TIPS yield, commonly interpreted as the inflation breakeven. (I leave the credit spread for another post.) 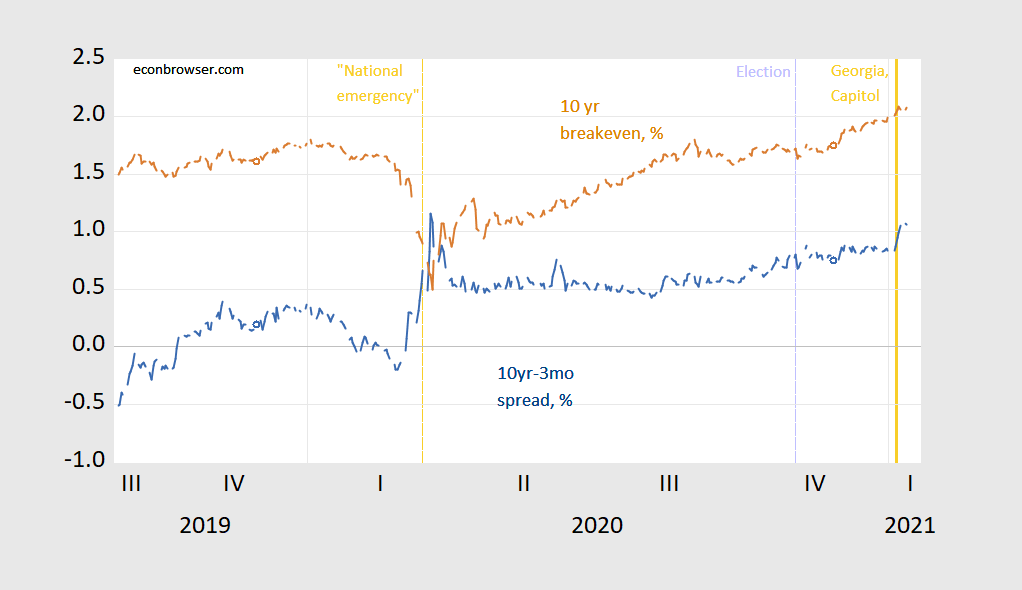 There has been some misunderstanding about what drives the spreads (e.g., term spread). Here is a short primer.

Consider securities issued by the same entity, in this case the Federal government. If the level of the long term (n-year) bond is given by the sum of the expectations hypothesis of the term structure (EHTS) and term premium (tp):

And the change in the 10yr-3mo spread, from one moment to another moment is:

Since both securities are issued by the Federal government, then there is no default risk included in the calculation (in any case US government debt is typically assumed to be default-risk-free).

What determines the term premium then, and changes therein? The typical interpretation is that the term premium on nominal bonds is due to the risk of unexpected inflation. If agents are risk neutral (or short and long bonds are perfect substitutes), then the term premium should be zero. Neither seems likely. Rudebusch and Christensen and Adrian-Crump-Moench provide near-real time estimates. Other estimates include that at the Fed Board. Cohen et al. (2018) surveys the literature on the empirical determinants of the term premium.

Hence, as discussed in this post, one cannot be sure about the reasons for the yield curve steepening.

If the 10 year TIPS depends on expected future one year real rates and a liquidity premium (lp), then:

The liquidity premium is defined as the premium that arises because of the lower liquidity of the TIPS market; from Andreasen, Christensen and Riddell (2020):  “Despite the large size of the TIPS market, an overwhelming amount of research suggests that TIPS are less liquid than Treasury securities without inflation indexation

Hence the spread is:

If the term premium on nominal bonds and liquidity premium on TIPS were zero (or each moved in lockstep), then the gap between 10 year Treasurys and 10 year TIPS could be imputed to expected inflation over the next ten years. However, that is not likely to be true, so the commonly calculated breakeven is probably measured with error, which is likely to vary systematically over the business cycle.

Andreasen and Christensen (2020) argues that adjusting for the liquidity premium improves inflation forecasting.

Bottom line: When looking at spreads, one should be careful about the interpretation. A little research before pontification can make any debate more productive.

Torsten Slok’s view on the measured breakeven, today (not online):

There are four reasons:

1) As part of QE, the Fed is buying TIPS, putting upward pressure on breakevens.

3) We may get another fiscal stimulus, boosting growth expectations and inflation expectations.

The bottom line is that the move higher in breakevens is driven by Fed purchases of TIPS, higher commodity prices, fiscal policy, and the Fed’s new framework.