Juan E. Castañeda (Director) and Tim Congdon (Chairman) of the Institute for International Monetary Research at the University of Buckingham write today:

With the M3 velocity of circulation at 1.04, equilibrium nominal national income comes out as roughly $29,000b.

…if nominal GDP needs to rise by 30% in a period of 18 months to two years, and if real output cannot go up in that period by more than, say, 8%, then the rest of the adjustment has to be seen in the price level. Continued boom between now and Q4 2022 in which real output rises by 8% and the price level by 20% would in fact result in a 30% jump in nominal GDP

Using the calculations implicit in their study, I derive the following graph of the GDP deflator (assuming 7% real growth by end 2022 ). 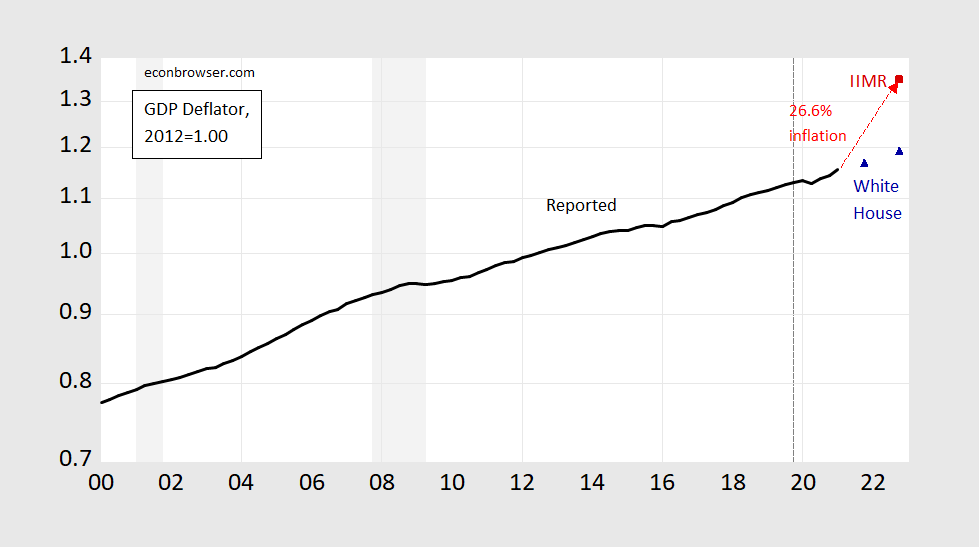 As the authors note, the approach is essentially using the Quantity Theory, MV=PY. Use M3 for money (M), assume V (velocity) is mean reverting, obtain PY (nominal GDP), and then assume Y cannot rise more than a certain amount (7%, or 8%, depending on location in text). M3 is a broader measure of money than M2   (post 2006 data sourced from Shadowstats). If my calculations are correct, this implies the GDP deflator will grow at 26.6% (annual rate) through 2022Q4. Over the 2000-2021Q1 period, the CPI has grown about 31% faster than the GDP deflator, so that suggests a CPI inflation rate of about 34.5% for the next 1.5 to 2 years. (Figure 2 shows the evolution of the two series). 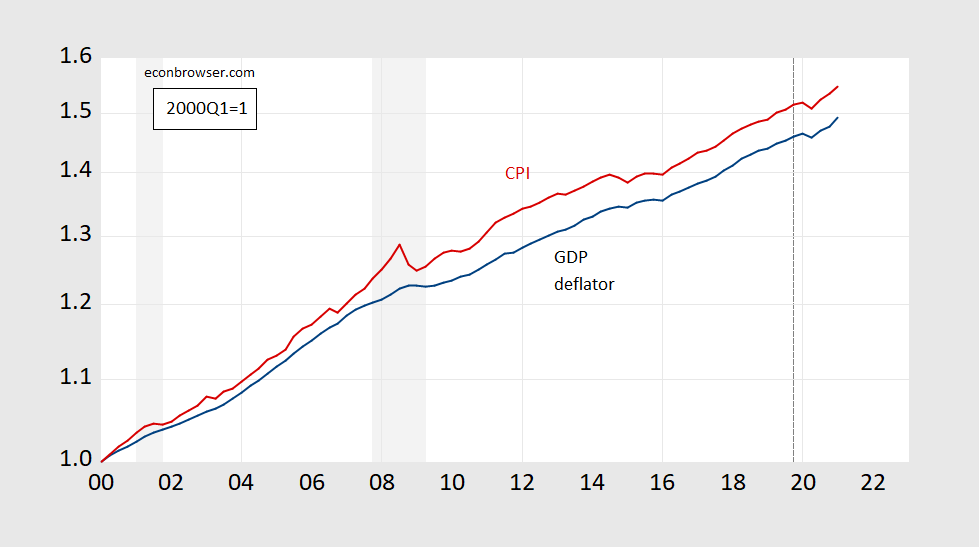 How plausible is the prediction of a 29,000 bn GDP? A key part of the Castañeda-Congdon argument is that (1) nominal GDP is determined by the quantity of broad money assuming a value of velocity, and (2) velocity is predictable and mean reverting. On (2), standard unit root test results (ADF, DF-ERS) applied to the available M3 measure of velocity (1959-2006) indicate that one can’t reject a unit root null at conventional levels, and can typically reject a trend  stationary null (KPSS) at 5% level.

In other words, a key assumption in the Castañeda-Congdon calculation is questionable.

113 thoughts on “A Monetarist Manifesto for the Covid-19 Era”