Inflation Is a Mere Construct

We used to know what inflation was, its pernicious role in past civilizations, and how to combat it. The danger of worthless currency is a staple of classical literature from Aristophanes to Procopius. The scary fact is not just that we are destroying the value of our  money—the exploding price of gas, food, appliances, lumber, power, and housing are  overwhelming even Joe Biden’s entitlement machine—but that we are constructing pseudoeconomics to justify the nihilism.

Right now, we witness a multitrillion-dollar fight over borrowing beyond our $30 trillion debt  to build “infrastructure,” a word that has been expanded to include mostly anything but roads and bridges. What exactly is so liberal about the farmworker paying $5 a gallon for  gas to commute to the fields, the small contractor doing a remodeling job with plywood at  $80 a sheet, or the young couple whose loan qualification is always a month behind the  soaring price of a new home?

What the heck does he mean by “mere construct”? I think what he is alluding to is the following definition of a construct:

Social constructionism is a theory of knowledge in sociology and communication theory that examines the development of jointly constructed understandings of the world that form the basis for shared assumptions about reality. The theory centers on the notion that meanings are developed in coordination with others rather than separately within each individual.

Well, who I am I to criticize this argument? — I only took one sociology course in college. But it sure sounds like he’s saying “inflation” is whatever he — and his friends — say it is. Nonetheless, I can talk about inflation as a technical term, from an economist’s perspective.

What does this construct look like in the United States over the two and a half years? Below I show the month-on-month annualized inflation rate (for data of monthly frequency, the calculation I use is πt ≡ [(Pt/Pt-1)12-1]x100%. 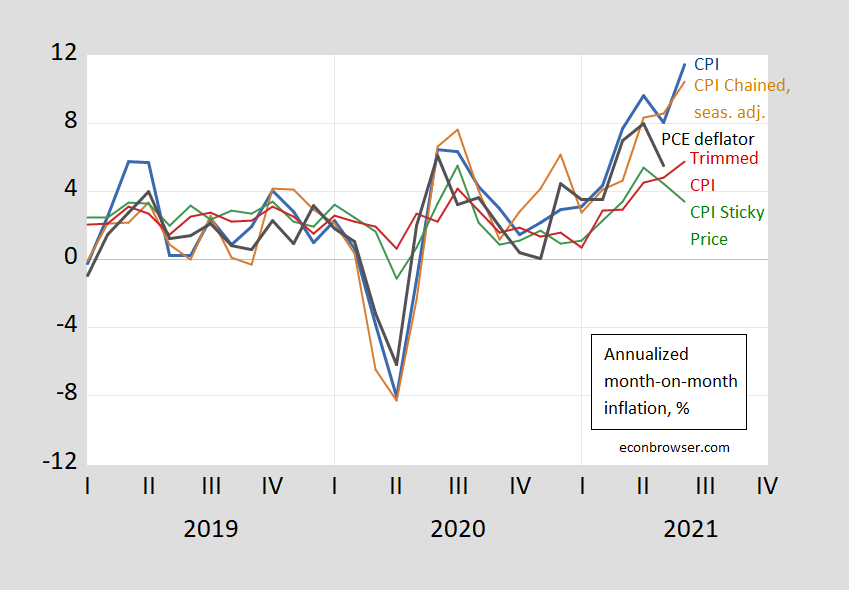 And for the longer perspective: 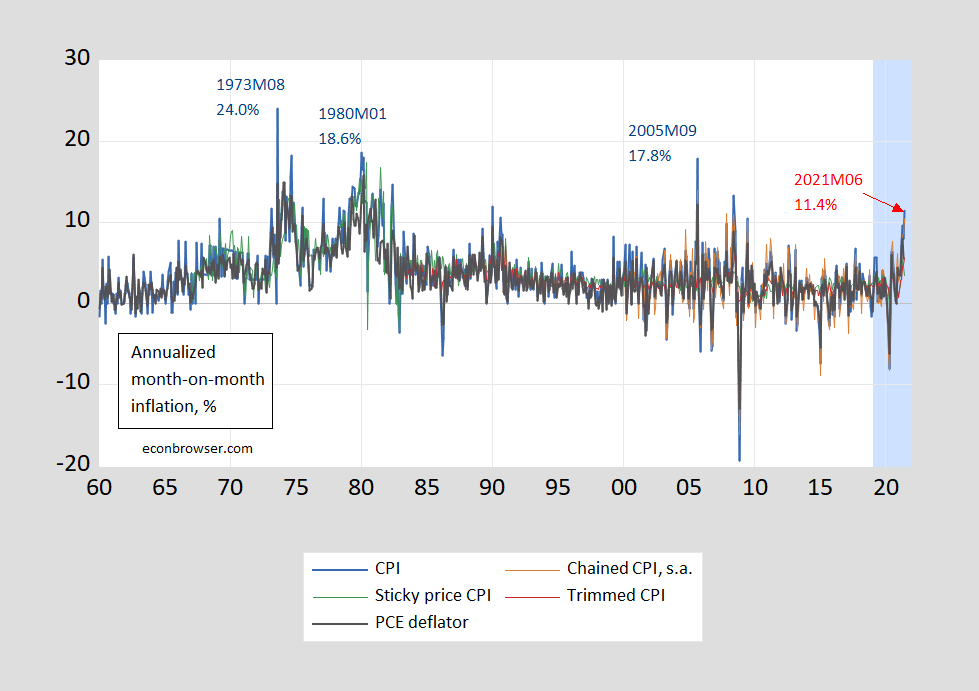 Survey based expectations of inflation (12 month) are shown in this post. July nowcast for m/m inflation is quite low, as shown in yesterday’s post.

For those who are unable to interpret growth rates, here is a graph of the purchasing power of a single dollar spent in a US city, based on the CPI. 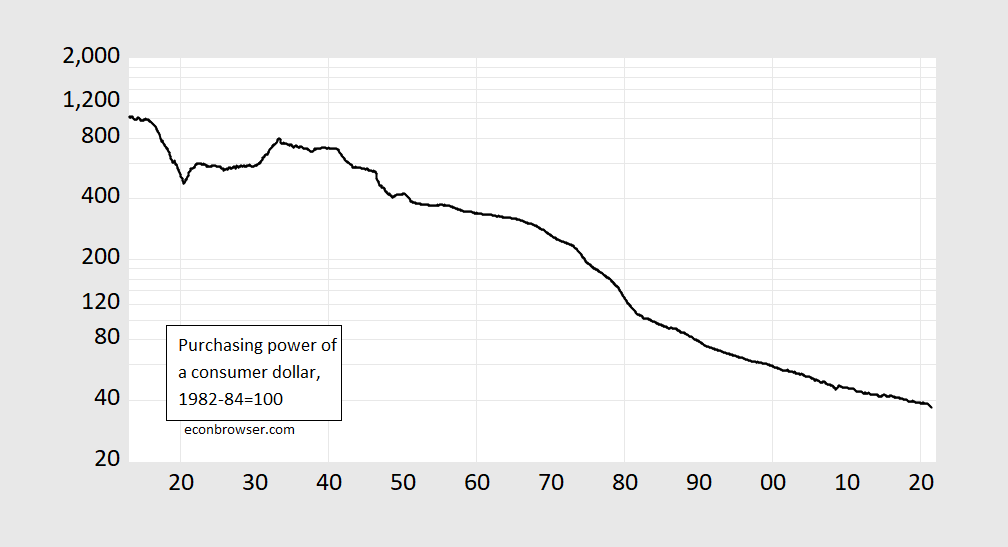 One can readily see that the loss of currency purchasing power is not particularly marked in the last year.

Finally, because no right-wing screed is complete without some conspiracy theory attached, I show an alternative price index (and corresponding inflation rate) based on online data, derived from the Billion Prices Project (described here by Jim), and drawn from an illuminating presentation by Alberto Cavallo at HBS. The blue line is the BLS series, the red PriceStats. 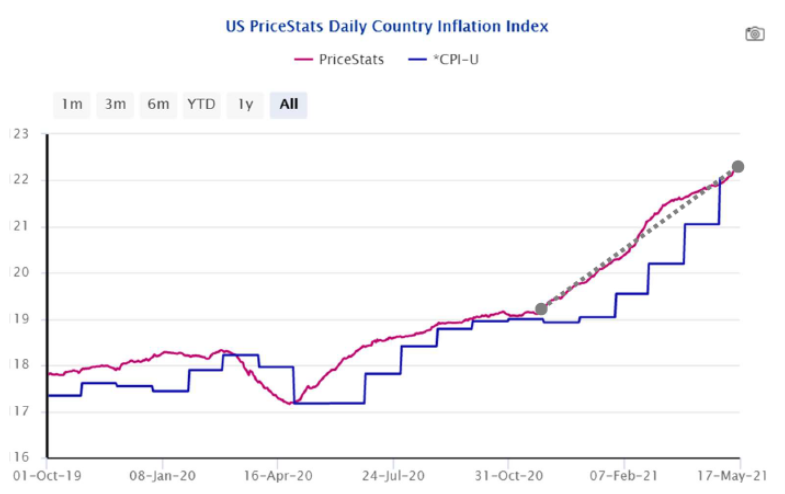 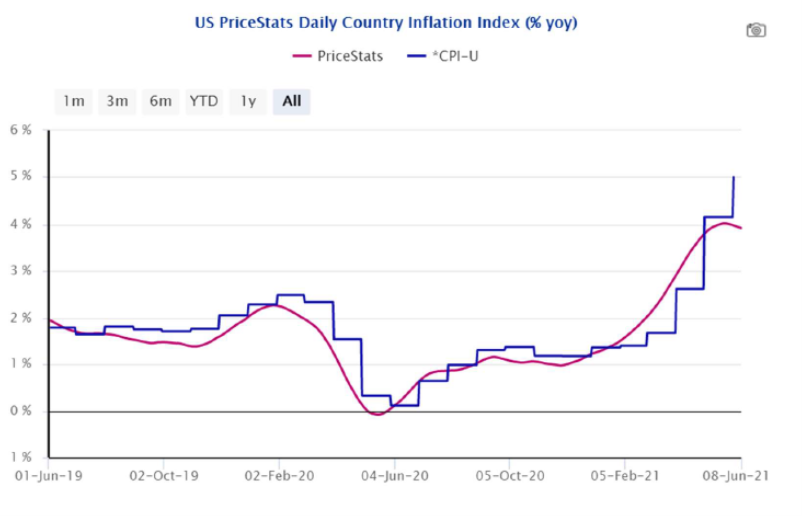 In other words, the CPI seems to not be too far off right now in terms of actual price developments that “people” face. (In this June 2021 presentation, he notes that while the CPI probably understated inflation in 2020, it probably overstates it in 2021.)

By the way, I don’t always disagree with Hanson. Here’s his last appearance in Econbrowser. To use a new-fangled phrase, perhaps he should “stay in his lane”. As for the Independent Institute, here is the last time a commentary from that organization showed up in Econbrowser.

45 thoughts on “Danger: When a Classical Scholar(/Ideologue) Discusses Inflation”