From Ha, Kose, and Ohnsorge, One-Stop Source: A Global Database of Inflation:

This paper introduces a global database that contains inflation series: (i) for a wide range of inflation measures (headline, food, energy, and core consumer price inflation; producer price  inflation; and gross domestic product deflator changes); (ii) at multiple frequencies (monthly, quarterly and annual) for an extended period (1970–2021); and (iii) for a large number (up to 196) of countries. As it doubles the number of observations over the next-largest publicly available sources, the database constitutes a comprehensive, single source for inflation series. The paper illustrates the potential use of the database with three applications. First, it studies  the evolution of inflation since 1970 and document the broad-based disinflation around the world over the past half-century, with global consumer price inflation down from a peak of  roughly 17 percent in 1974 to 2.5 percent in 2020. Second, it examines the behavior of inflation during global recessions. Global inflation fell sharply (on average by 0.9 percentage points) in the year to the trough of global recessions and continued to decline even as recoveries got underway. In 2020, inflation declined less, and more briefly, than in any of the previous four global recessions over the past 50 years. Third, the paper analyzes the role of common factors in explaining movements in different measures of inflation. While, across all inflation measures, inflation synchronization has risen since the early 2000s, it has been much higher for inflation measures that involve a larger share of tradable goods.

Here’s one figure from the paper. 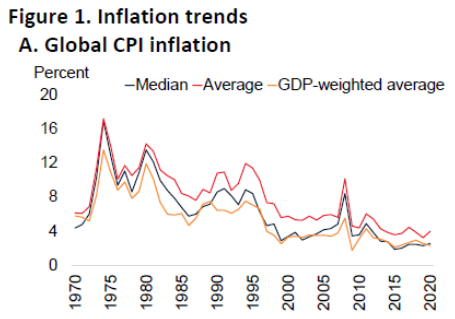 The database is here.