Today we are pleased to present a guest contribution written by Justin-Damien Guénette (Senior Economist), Jongrim Ha (Senior Economist), M. Ayhan Kose (Chief Economist and Director) and Franziska Ohnsorge (Manager) from the World Bank’s Prospects Group. The findings, interpretations, and conclusions expressed in this blog are entirely those of the authors. They do not necessarily represent the views of the World Bank, its Executive Directors, or the countries they represent.

In February 2022, global inflation rose to its highest level since 2008. Year-over-year inflation in advanced economies rose nearly ten-fold over the past year. That was before Russia’s invasion of Ukraine set commodity prices soaring. High and rising inflation has already been prompting many emerging market and developing-economy (EMDE) central banks to tighten monetary policy.

As the recent decision by the U.S. Federal Reserve shows, the economic fallout of the war in Ukraine is unlikely to derail announced plans of some major advanced-economy central banks to tighten monetary policies to rein in inflation. Should such policy tightening be faster than expected, it could lead to a sharp repricing of financial market risk in EMDEs and stifle economic recovery. To create space for monetary policy action and anchor medium-term inflation expectations, EMDE central banks need to bolster credibility including through transparent communications. 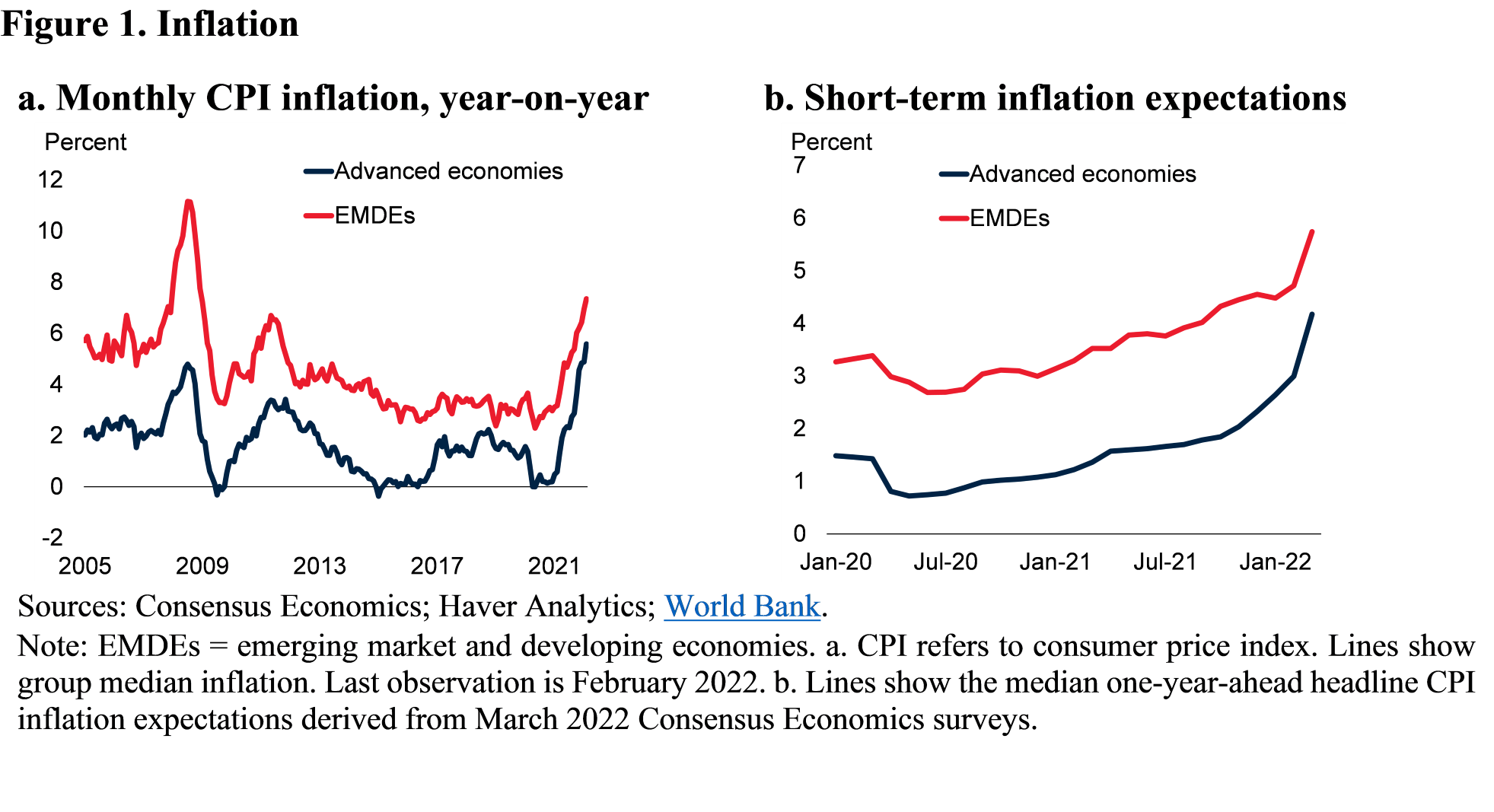 In advanced economies, central banks have so far reacted to the increase in inflationary pressures with a gradual response, tapering off unconventional support introduced during the pandemic, and (in some) raising policy rates. They have also communicated their intentions to raise rates further in the months ahead. On March 16, the U.S. Federal Reserve raised the fed funds rate by a widely-expected 25 basis points, and signaled a string of rate hikes by the end of 2022 (Figure 2).

Financial markets have significantly raised their expectations for the trajectory of policy rates at major central banks (Figures 2a and 2b). The prospective increase in policy rates has contributed to increased financial market volatility but has yet to trigger a material tightening of financial conditions across advanced economies. 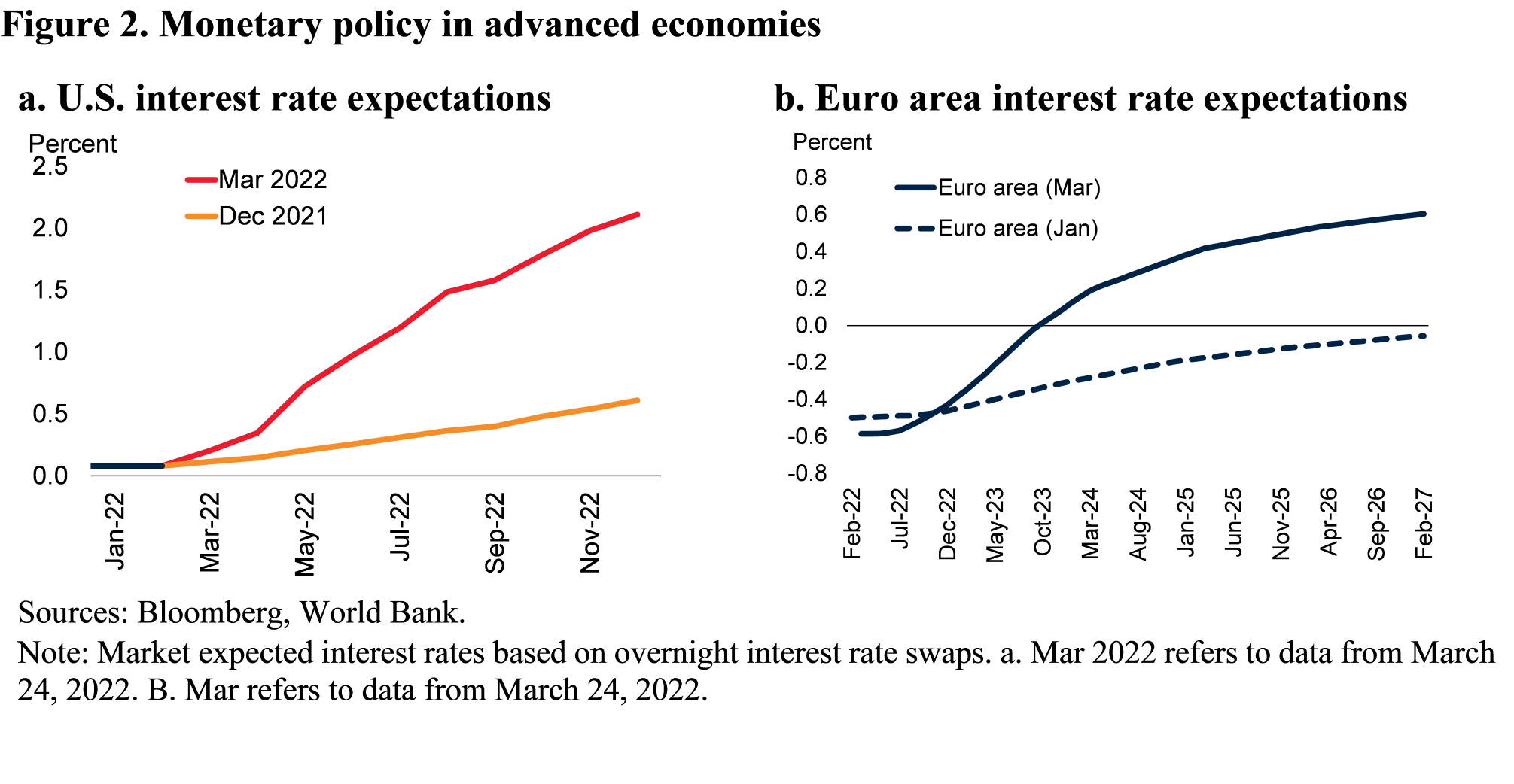 Global consumer price inflation is envisioned to peak later this year and then decline gradually, helped by well-anchored expectations in most economies (Figure 3). Easing inflation is in line with the anticipated global growth slowdown over 2022-23, from an exceptionally strong rebound in 2021. This global growth slowdown will be the steepest after any post-recession rebound over the past half-century and will be broad-based across advanced economies and EMDEs. 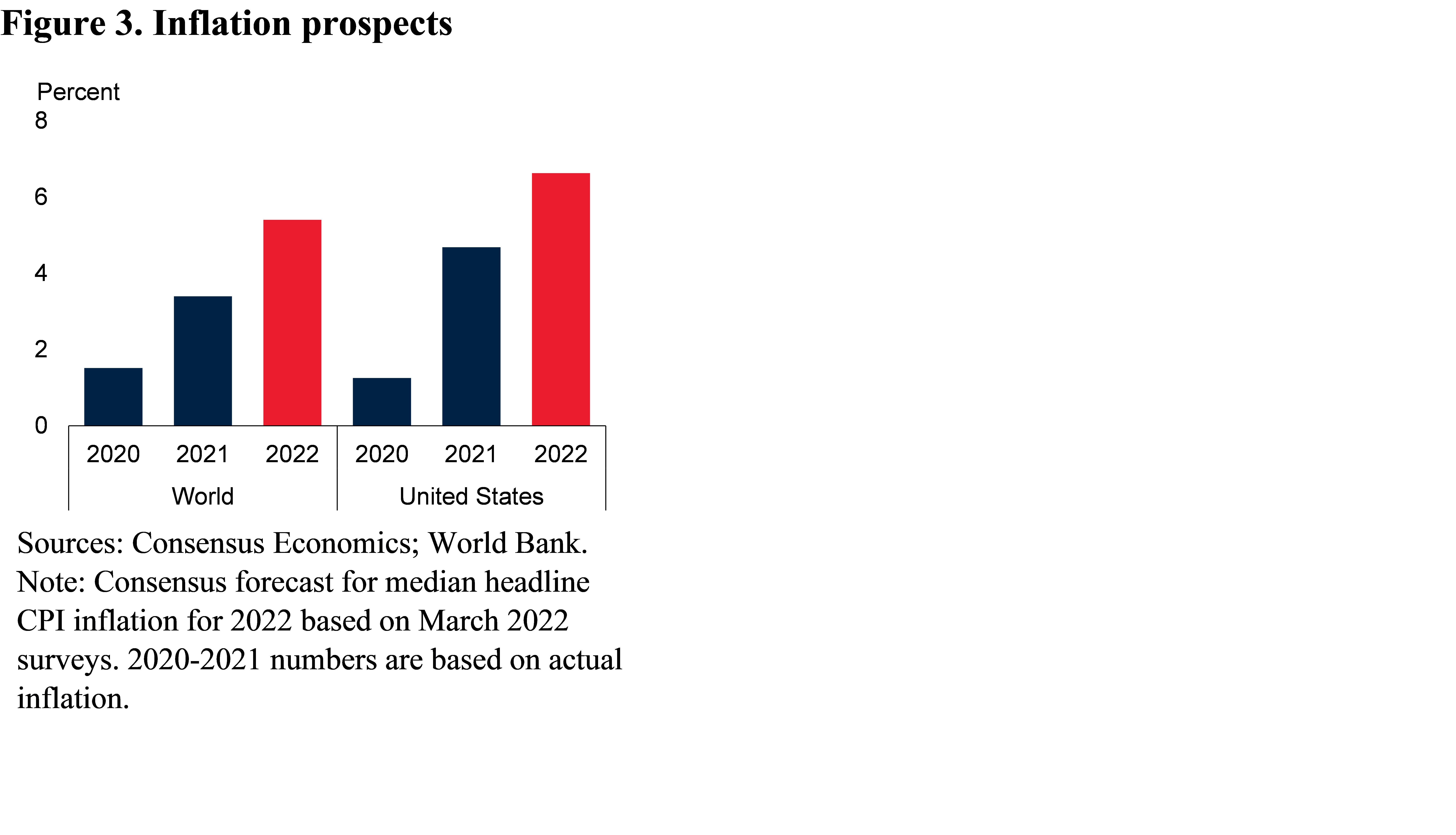 However, inflation is already above target in over nine tenths of advanced economies and two thirds of EMDEs that adopt inflation targeting. There is also a risk that inflationary pressures do not abate in the near term, and instead cause a steady rise in inflation expectations. For instance, if supply disruptions recur or commodity prices climb further—in particular due to the war in Ukraine—global inflation may remain high for a prolonged period or even rise further, pushing inflation well above target ranges for many countries. Although inflation data has yet to reflect the war in Ukraine, market-based inflation expectations have priced in additional inflationary pressures stemming from to the conflict.

If this risk materializes, advanced economy central banks may have no choice but rapidly increase policy rates. An upward shift in interest rate expectations in the United States could lead to a sharp repricing of risk by financial markets. The macroeconomic effects of an abrupt tightening of global financial conditions, as well as weaker consumer and business confidence, would compound the unwinding of global fiscal support and deepen the global slowdown underway. This could exacerbate already heightened macroeconomic vulnerabilities in EMDEs and trigger an even sharper slowdown in growth as negative spillovers via confidence, trade, and commodity price channels would reduce private sector activity.

These countries would experience capital outflows in response to heightened investor risk aversion, leading to currency depreciation, which in turn would worsen debt burdens and boost inflation. Foreign currency-denominated debt accounted for one-half or more of government debt in one-half of EMDEs in 2020. Even when not denominated in foreign currency, government and private debt at multi-decade highs makes these economies vulnerable to rising borrowing cost and rollover risk. Domestic credit spreads would widen, sparking a rise in defaults, especially in those countries with pre-existing balance sheet vulnerabilities. Increased debt servicing costs amid heightened rollover risks would force governments in many EMDEs, particularly in countries with limited fiscal space, to reduce public spending and delay investment projects. EMDEs would experience renewed downturns, with growth falling significantly this year.

While EMDE policymakers have limited impact on the design of monetary policies in advanced economies, they can usefully focus on calibration, credibility, and communication of their own policies. Specifically, mitigating adverse effects of the tightening cycle requires careful calibration, credible formulation, and clear communication of policies. This approach can go a long way in making EMDEs more resilient to sudden shifts in global financial markets.

For monetary policy, calibrating policy levers to get ahead of inflation without stifling the recovery will be key. For EMDEs, communicating monetary policy decisions clearly, leveraging credible monetary frameworks, and safeguarding central bank independence will also be critical to manage the cycle. On the financial side, policymakers must work to rebuild reserve buffers and realign prudential policy—including capital and liquidity buffers. In addition, they will need to bolster risk monitoring and enhance bankruptcy regimes.

With respect to fiscal policy, the message is much the same. The pace and magnitude of withdrawal of fiscal support must be finely calibrated and closely aligned with credible medium-term fiscal plans. Moreover, policymakers need to address investor concerns about long-run debt sustainability by strengthening fiscal frameworks, enhancing debt transparency, upgrading debt management functions, and improving the revenue and expenditure sides of the government balance sheet.