Satellite imagery from the National Snow and Ice Data Center at the University of Colorado at Boulder reveals that a 13,680 square kilometer (5,282 square mile) ice shelf has begun to collapse because of rapid climate change in a fast-warming region of Antarctica. 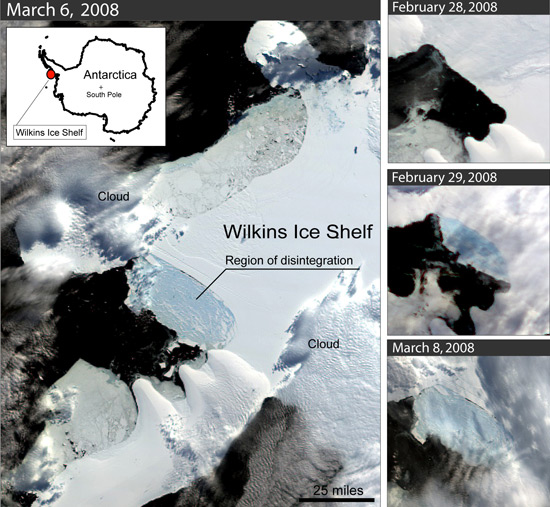 The Wilkins Ice Shelf is a broad plate of permanent floating ice on the southwest Antarctic Peninsula, about 1,000 miles south of South America. In the past 50 years, the western Antarctic Peninsula has experienced the biggest temperature increase on Earth, rising by 0.5 degree Celsius (0.9 degree Fahrenheit) per decade. NSIDC Lead Scientist Ted Scambos, who first spotted the disintegration in March, said, “We believe the Wilkins has been in place for at least a few hundred years. But warm air and exposure to ocean waves are causing a break-up.”


Satellite images indicate that the Wilkins began its collapse on February 28; data revealed that a large iceberg, 41 by 2.5 kilometers (25.5 by 1.5 miles), fell away from the ice shelf’s southwestern front, triggering a runaway disintegration of 405 square kilometers (160 square miles) of the shelf interior (Figure 1). The edge of the shelf crumbled into the sky-blue pattern of exposed deep glacial ice that has become characteristic of climate-induced ice shelf break-ups such as the Larsen B in 2002. A narrow beam of intact ice, just 6 kilometers wide (3.7 miles) was protecting the remaining shelf from further breakup as of March 23 (Figure 2).


Scientists track ice shelves and study collapses carefully because some of them hold back glaciers, which if unleashed, can accelerate and raise sea level. Scambos said, “The Wilkins disintegration won’t raise sea level because it already floats in the ocean, and few glaciers flow into it. However, the collapse underscores that the Wilkins region has experienced an intense melt season. Regional sea ice has all but vanished, leaving the ice shelf exposed to the action of waves.”


The Wilkins is one of a string of ice shelves that have collapsed in the West Antarctic Peninsula in the past thirty years. The Larsen B became the most well-known of these, disappearing in just over thirty days in 2002. The Prince Gustav Channel, Larsen Inlet, Larsen A, Wordie, Muller, and the Jones Ice Shelf collapses also underscore the unprecedented warming in this region of Antarctica.