With the Republicans in the House maximizing policy uncertainty, I think it useful to recount some of the recent research on how uncertainty is affecting output. In particular, I want to go beyond the talking point which asserts that regulatory uncertainty is depressing output (data free analysis here), given that we know empirical results asserting the level of regulation depresses output are not robust [1]. “… construct an index from three types of underlying components. One component quantifies newspaper coverage of policy-related economic uncertainty. A second component reflects the number of federal tax code provisions set to expire in future years. The third component uses disagreement among economic forecasters as a proxy for uncertainty.”

So when the authors find a large impact of uncertainty on output, it is important to note that it is primarily macro policy uncertainty, such as uncertainty regarding tax measure expirations. 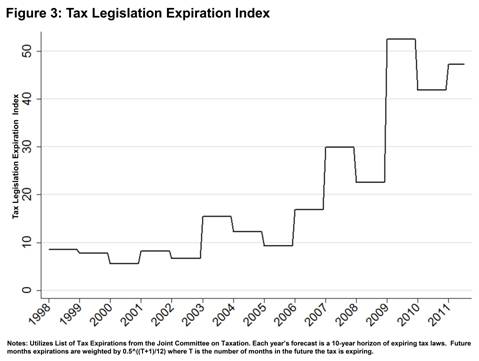 
The finding that macro and macro policy uncertainty seems to dominate in terms affecting output leads to the question of channels. Treasury Assistant Secretary Jan Eberly argues that deficient demand is the main reason why unemployment is high; I find her arguments persuasive.

If regulatory uncertainty was a major impediment to hiring right now, we would expect to see indications of this in one or more of the following: business profits; trends in the workforce, capacity utilization, and business investment; differences between industries undergoing significant regulatory changes and those that are not; differences between the United States and other countries that are not undergoing the same changes; or surveys of business owners and economists. As discussed in a detailed review of the evidence below, none of these data support the claim that regulatory uncertainty is holding back hiring.

If regulation was a significant drag on business today, we would expect to see profits constrained after recent regulatory reforms were passed into law. However, corporate profits as a share of gross domestic income have about recovered their pre-recession peak, and earnings per share in industries most affected by recent regulatory changes, such as energy and health care, have among the highest earnings per share of those in the S&P 500. This growth is inconsistent with a corporate sector held back by regulation.

If regulatory uncertainty was the primary problem facing businesses, firms would prefer to use their existing capacity and current workers as much as possible, while avoiding building additional capacity until they are more certain about the contours of future regulation.

Specifically, if demand was strong but businesses were concerned about future regulations, they would increase the hours of the workers they already employ rather than hiring additional workers. We have seen no evidence of this in the data: the average work week for private employees has been roughly flat for the past year. Similarly, if demand were strong, firms could easily expand using existing capacity without taking on the cost and risk of added capacity. However, the share of total potential industrial output in use remains 3 percent below its long-run average. Low capacity utilization is inconsistent with concerns about future regulatory risk, but aligns with weak demand holding back current production.

At the same time, business investment has led economic growth over the last few years. Since the end of the first quarter of 2009, real investment in equipment and software has grown by 26 percent – about five times as fast as the economy as a whole. However, businesses would not increase investment if they thought that future regulation posed a threat to their ability to operate profitably.

If regulatory uncertainty were having a significant impact on business performance, we would expect this to be reflected in capital markets. However, financial indicators do not provide any evidence in favor of this hypothesis.

As shown in the chart below, corporate bond yields are low across a range of industries, suggesting that firms in industries facing greater regulatory risk, such as insurance and energy, are not being priced out of the market.

However, it is possible that macro policy uncertainty itself reduces aggregate demand; in Uncertainty Shocks in a Model of Effective Demand Susanto Basu and Brent Bundick of Boston College write:

For me, the policy conclusion emanating from all three of these pieces is that if there is important policy uncertainty, it is that related to fiscal policy. Empirical (i.e., econometric) evidence that regulatory uncertainty is important is, to my knowledge, non-existent. Hence, we can conclude that repeated crises over the raising of debt ceilings, continuing resolutions, and the like should be avoided.