Gasoline prices in the United States have risen sharply recently, leading some newspapers to round up the usual suspects.

But the reality is the price of crude oil has been remarkably stable over the last three years. 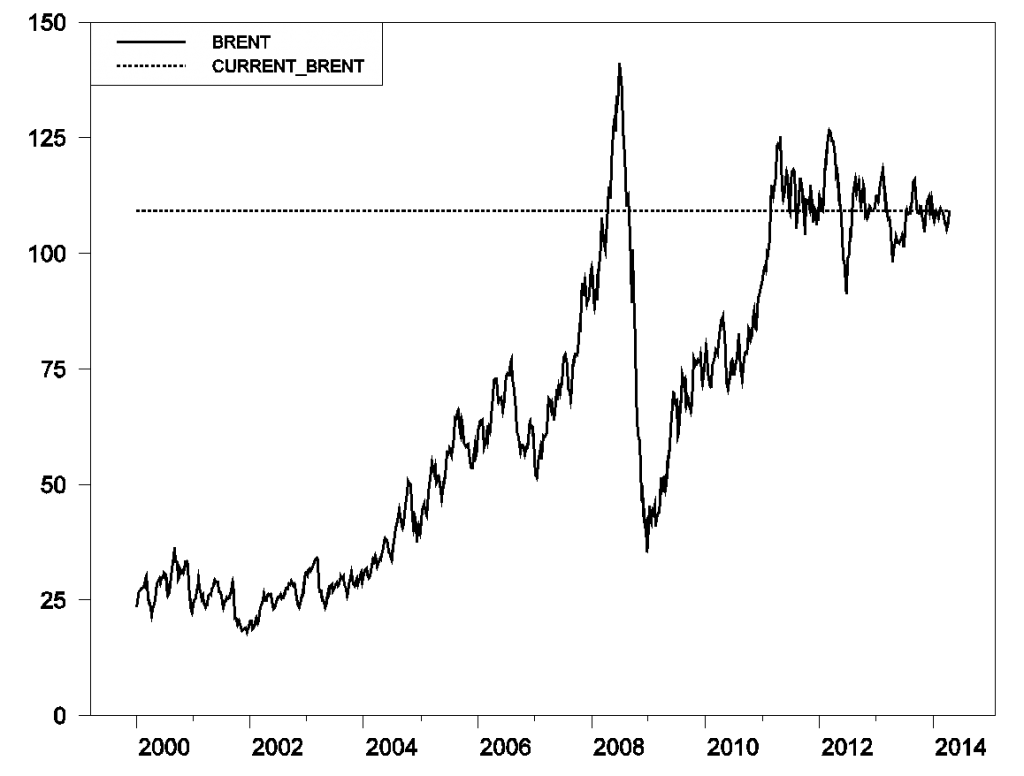 The international price of crude oil ultimately determines the price Americans pay for gasoline at the pump. Seasonal factors can bring the price temporarily below the long-run relation, and this accounted for the temporarily low gasoline prices that we saw last fall and winter. Movements in gasoline prices back up this spring are basically a return to normal. 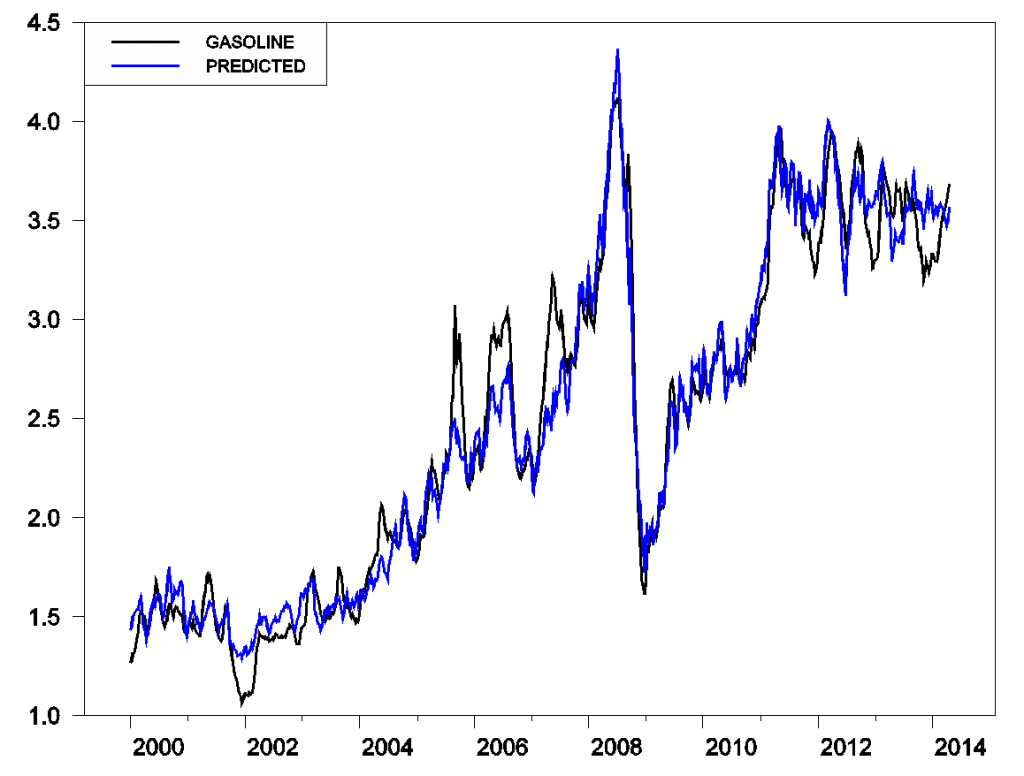 Here are some updated data on the answer I gave to that question last September. What the EIA reports as total oil supply grew by 5.7 mb/d between 2005 and 2013. 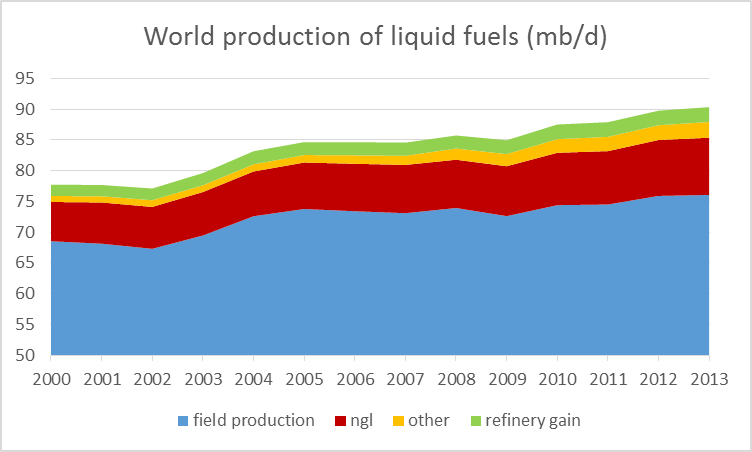 But about half of this increase came in the form of natural gas liquids like ethane and propane, whose uses don’t include making gasoline, along with biofuels, at best a marginal addition to net energy supply. The total increase in actual field production of crude oil globally since 2005 has only been 2.3 mb/d. 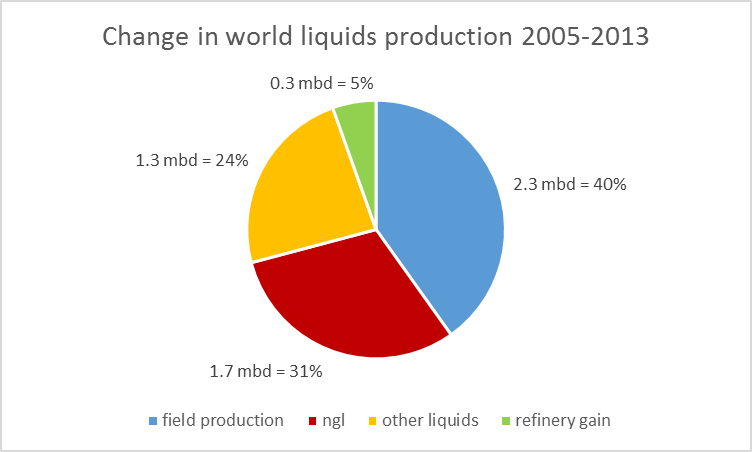 2.3 mb/d represents 3% of 2005 world field production. For comparison, world GDP grew by 28% since 2005. If oil prices had remained stable, with that much more income we would have expected much more than a 3% increase in quantity of oil demanded globally. The price of oil had to rise sufficiently– namely, to above $100/barrel– to restrain global oil demand to grow at a very slow rate over the last 8 years.

The EIA has recently updated its assessment of how much more U.S. tight oil production might increase. They acknowledge considerable uncertainty about factors such as how much ultimately can be recovered from each well and whether productivity will be maintained as drillers move to new areas or place wells closer together. Their reference scenario anticipates the U.S. will add another 2 mb/d over the next 3 years after which production will plateau and then gradually decline, though the EIA also sees possibilities of paths significantly more optimistic and pessimistic than this. 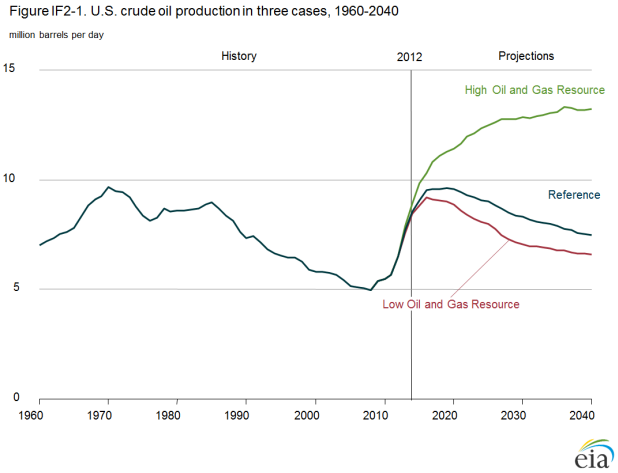 If the U.S. continues to be the only source of global growth in oil production, and if the world economy continues to expand at the pace it has over the last decade, oil prices are headed further higher. But how much promise does fracking hold outside the U.S.? The EIA believes Russia may have even more potential than the U.S., and Russia produced 120,000 b/d using horizontal fracturing methods in 2013. China may have about half the potential as the U.S. in shale oil and even more with shale gas, and is working hard to make that promise a reality. Argentina also has potential, but good luck with any capital you invest in that country. And turmoil in Libya is preventing shipment of even the easy-to-obtain conventional crude, let alone trying to go after the potential shale deposits. 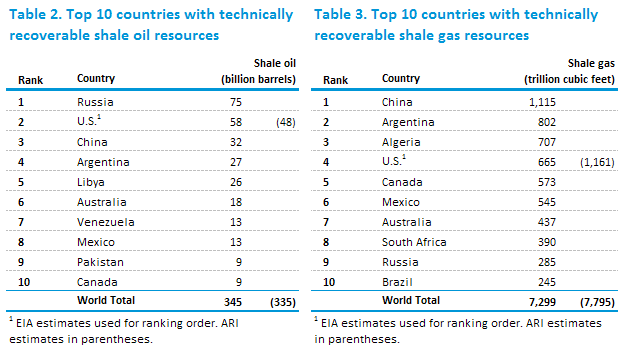 Quantities aside, producing oil from tight formations remains an expensive proposition. Most of the companies in this business have negative cash flows, sinking more money into the operations than they are getting out. And it’s not the case that the companies are acquiring an asset that will continue to pay off for years to come– decline rates from individual wells remain quite impressive. 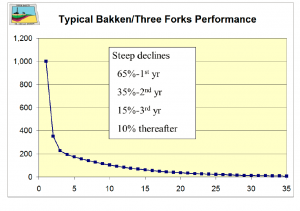 Peak Oil Barrel had an interesting graphic illustrating what those decline rates would mean for the path of North Dakota production if new wells stop being drilled. 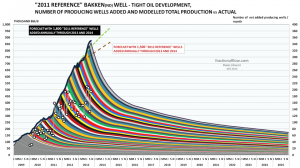 For the next several years, the world should be able to continue to increase field production of crude oil, as long as the price stays at current levels. The real message from the new technology is this: oil prices have been remarkably steady over the last several years because of– not in spite of– the important added contribution of tight oil.

16 thoughts on “Oil and gasoline prices: many still missing the big picture”