Reader Steven Kopits writes “potential GDP model is also a binding constraint model”, so GDP “…is subject to some sort of natural speed limit which cannot be exceeded”. This assertion is so amazingly absolutist in nature, and represents such a misunderstanding of how macroeconomists typically think of potential, that I am moved to observe that if this were so, output would never exceed potential GDP in our frameworks. Now, let’s consider the relevant depiction implied by the CBO estimates (using a production function approach [1]). 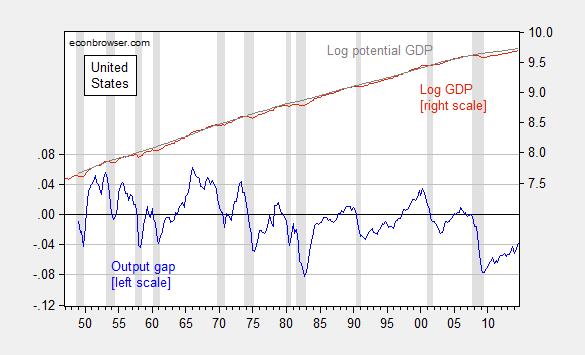 Note that output exceeds potential on numerous occasions according to CBO estimates, and hit 3.5% (log terms) as recently as in 2000. That’s because in this framework (the neoclassical synthesis, as forwarded in for instance Samuelson’s textbook, or e.g., here), factors of production can be utilized at greater than “normal” rates.

Now there are interpetations of potential GDP that fit Kopits’ description; from this post: 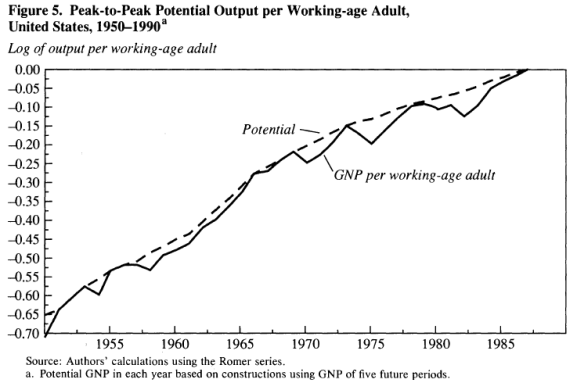 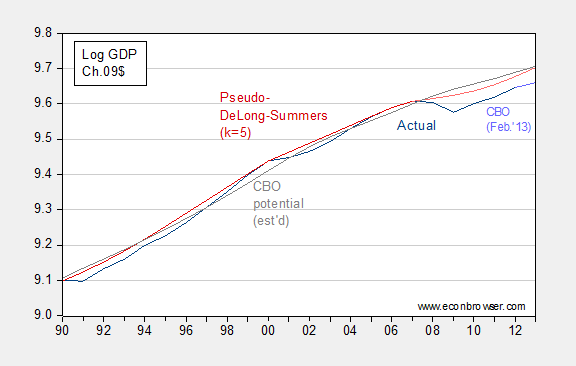 In the context of the Summers-DeLong (1988) framework, potential does constitute kind of a speed limit (although not completely since higher investment can increase the capital stock and hence elevate the trajectory of potential). But this speed limit interpretation does not apply for case for the conventional interpretation of potential GDP I use. Still plenty of wide, open road, and no speed limit in sight in this view.

I wish people would read an intermediate (heck, maybe an intro) macro textbook before saying what’s in the textbook…

For more discussion of how macroeconomists typically interpret potential, see this post, and Weidner, Williams/SF Fed. Notice that if one uses Mankiw’s approach of inverting the Phillips curve, the output gap is about -5.75% (log terms), even taking into account the upwardly revised GDP growth for 2014Q3 in the final release.