Some individuals keep on asserting that because something affects the growth rate of a variable for only one period that the impact on the variable in question lasts only one period [1] [2]. Here is an extremely simple exposition on why this belief is misguided.

Suppose the growth rate (in log terms) is constant at 1% q/q (4% on an annualized basis); then the log level of the variable rises on a trend, as in Figure 1. 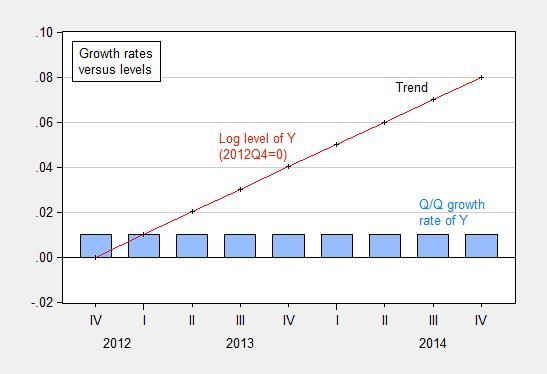 Suppose the growth rate drops by 2% q/q for one period, 2013Q2, but then reverts to 1%, thereafter, as in Figure 2. Notice then that output never reverts to pre-shock trend. 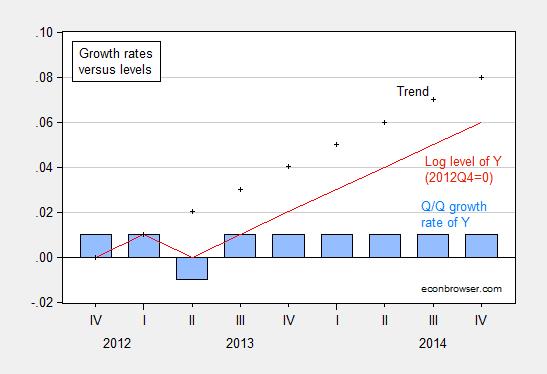 Only if the growth rate drops by 2% q/q one period and then rises by 2% one period, before reverting back to 1% growth rate, will the log level revert to trend, as in Figure 3. 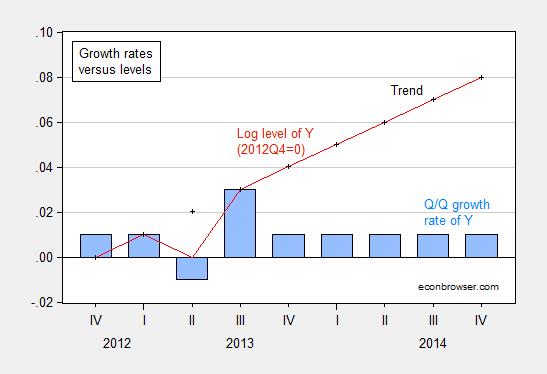 So, what’s the relevance of this really simple exposition? Well, if one observes a large drop in the growth rate for one period, and then return to pre-shock growth rates, that does not mean that the impact on the level of the variable only lasts one period. In point, of fact, in this example, it is a permanent impact. Let the variable be real GDP, and the shock the sequester, and one has the real-world analogue.

If you feel like you have seen this distinction drawn in the past, you are correct; here is the relevant post from 5 years ago.