Given worries regarding an imminent slowdown in the wake of the stock market decline, it’s of interest to see what the term premium is signalling. 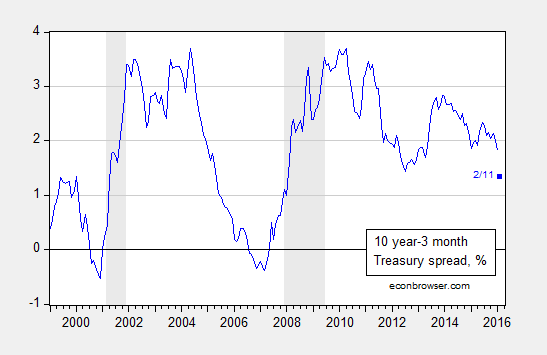 Estimating a standard probit model for recessions based on one year lagged term spread over the 1986-2015 period (encompassing the “Great Moderation”) yields:

The spread on 11 February was 1.35 percentage points. Putting this into the estimated equation yields a value of -1.32, implying a 9.3% probability of a recession within the next year. This is a slightly different probability than that reported in this post due to the flattening of the yield curve since January 11th, and a slightly different sample period (the previous used 1970-2013).