Last December the Fed began what it thought at the time was a new cycle of tightening. Fed Chair Janet Yellen’s statements last week suggest the Fed still sees this plan as underway. A comparison with historical tightening cycles sheds some light on why so far the Fed hasn’t followed through.

The graph below plots the fed funds rate over the last 30 years and highlights 4 historical tightening episodes in 1988, 1994, 1999, and 2005. The fed funds rate went up by 300 basis points on average in these episodes within the space of one or two years. 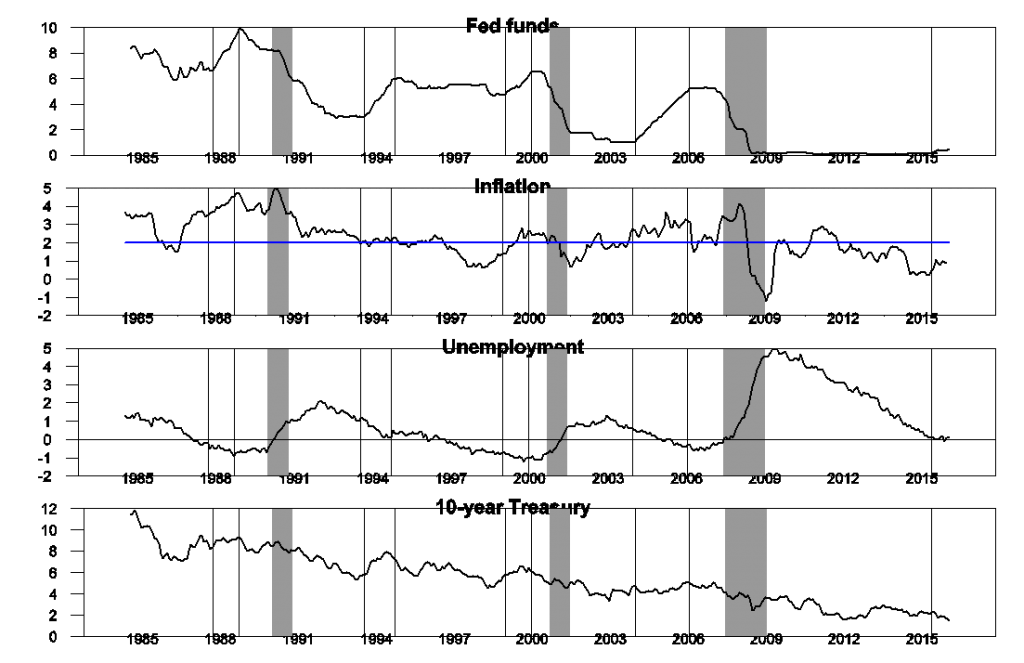 The FOMC anticipated in December that it would implement 4 more rate hikes in 2016 and another 4 in 2017, a bit slower than the typical tightening cycle highlighted above, but a clear tightening cycle nonetheless. So far they have implemented zero increases beyond the first modest move in December.

But in several other respects this isn’t shaping up like the earlier cycles. Inflation is a little higher than it was last year, but is still a full percentage point below the level that the Fed says it would like to see. The unemployment rate has barely budged, and has not yet moved below the CBO estimate of the natural rate. And most revealing of all, the long-term interest rate has fallen dramatically, completely unlike the behavior in a typical Fed tightening cycle.

The Fed may be anticipating solid growth, but so far the bond market doesn’t seem to be. There’s really no evidence yet that inflation needs to be contained or that we should slow down the labor market. If all three of those indicators– inflation, unemployment, and long-term rates– were sending a positive signal, then I’d be all on board for going ahead. But when none of the three are, it makes more sense to keep the plan on hold for now.