Today we are pleased to present a guest contribution by Yi Zhang, Ph.D. candidate at the University of Wisconsin-Madison. This post draws upon this paper.

Until the advent of the 2008 global financial crisis, the Federal funds rate was the Fed’s main policy instrument. Thereafter, with the Fed funds rate at the zero lower bound (ZLB), effective use of the policy rate was highly circumscribed.

A very popular method to summarize unconventional monetary policy is to estimate a shadow rate (usually using a term structure model), where the shadow rate is allowed to be negative. See, for example, Krippner (2012, 2013), Bauer and Rudebusch (2013,forthcoming), Lombardi and Zhu (2014), Christensen and Rudebusch (2015, 2016), and Wu and Xia (2016); the shadow rate from this last study is depicted in Figure 2. 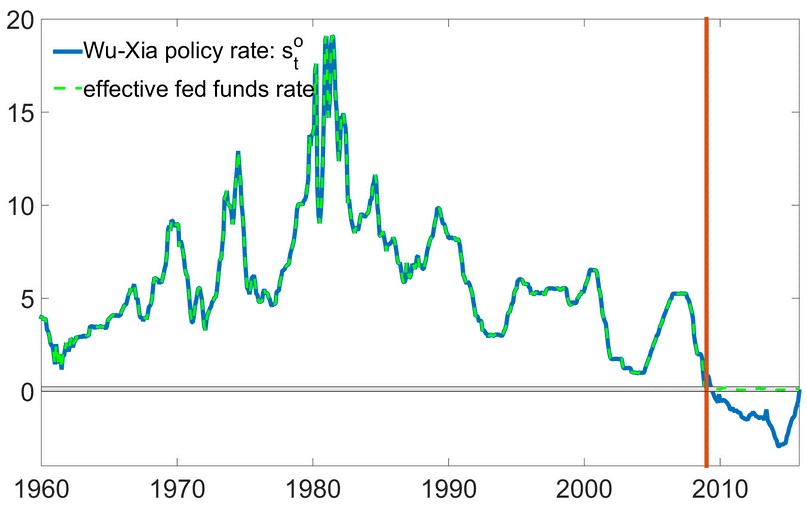 This paper shows that unconventional monetary policy manipulates the entire yield curve, rather than merely the short end. However, the shadow rate, by extracting only the short end, omits the rest of the information contained in the term structure, which as a whole, has a profound impact on the economy. Hence the shadow rate is not a sufficiently informative measure of unconventional monetary policy. I provide two supportive pieces of evidence:

The FAVAR estimates (in green) are highly implausible. For example, it is hard to believe that in 2009 any market participant anticipated that the ZLB period would last until late 2017, or that in early 2011 anyone ever anticipated the ZLB period would last until 2019. Such a dramatic contrast between the survey-based lift-off dates and those predicted by the FAVAR model demonstrates that forward guidance contains large amounts of information that the traditional FAVAR model (and the shadow rate) fail to capture.

Figure 4: Blue lines: observed economic variables between July 2009 and December 2013, the policy rate is constructed from Wu and Xia (2016)’s term structure model. Red dashed lines: what would have happened to these macroeconomic variables, if all the monetary policy shocks were shut down.

After controlling for expectations about lift-off, I am able to decompose the (biased) FAVAR model monetary policy innovation into two components: (i) a forward guidance term that measures the information given out by period-t forward guidance, known at period t, and (ii) the model innovation that is estimated by the FGC-FAVAR model; these two components are on the right hand side of the below equation, and depicted graphically in Figure 5. 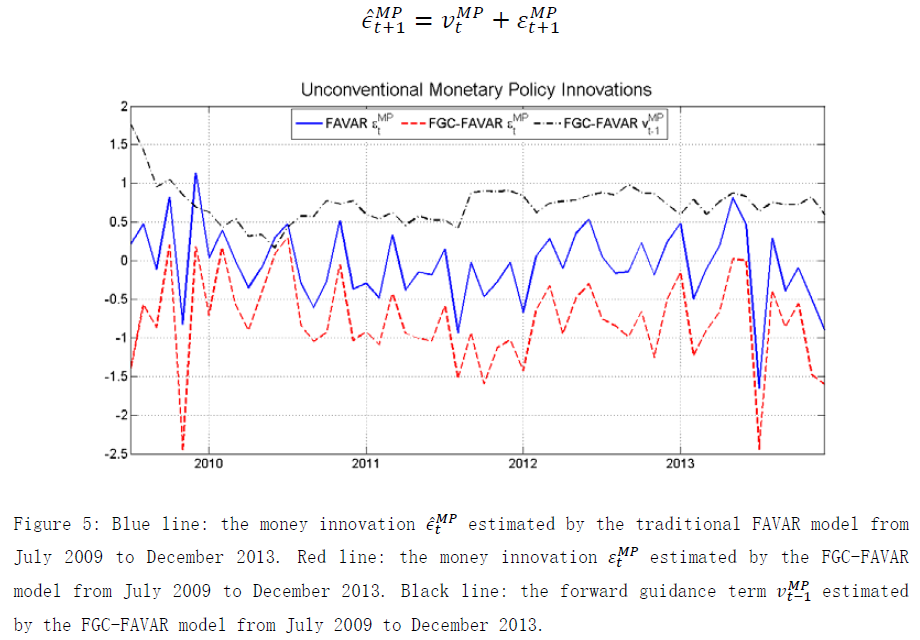 This decomposition shows that the standard FAVAR model confounds the period-t forward guidance information with the policy shock, and hence severely underestimates the aggressiveness of unconventional monetary policy in the post-crisis period. My analysis also indicates a status quo of U.S. unconventional monetary policy: On one hand, for a long time, the market continues to believe that lift-off is just around the corner (within a year or so). On the other hand, the Fed tries to convince the market that the Fed has shifted to a more accommodative policy approach and the expected ZLB duration would be longer than the market expects. To convince the market, the Fed surprises the market month after month (contemporaneous money shocks). After the market finds that the contemporaneous money shock is more dovish than it expected, the market would then slowly defer its expected lift-off date.

The counterintuitive estimated effects found in a standard FAVAR model disappears in my FGC-FAVAR model. In particular, the constructed policy rate is always lower than the counterfactual policy rate (black dashed line), indicating that the Fed was implementing an expansionary policy during this period.

The efforts by the Federal Reserve to stimulate the economy since July 2009 succeeded in reducing the unemployment rate in December 2013 by 3.8 percentage points and elevating real output (as measured by industrial production) by 15.6%. These effects are noticeably larger than the estimates reported in the literature.