Is this how we should be choosing the Fed Chair? From WaPo:

Top White House economic adviser Gary Cohn is unlikely to be nominated as Federal Reserve chairman because he criticized President Trump’s response to violent white supremacists last month, two people familiar with the decision-making process said, upending the search for who will control the most powerful economic post in the world.

and from NYT today:

Several aides said Mr. Trump is freezing out Mr. Cohn by employing a familiar tactic: refusing to make eye contact with Mr. Cohn when his adviser greets him.

At a meeting on Thursday on infrastructure at the White House with Gov. Andrew M. Cuomo of New York and members of Congress from New York and New Jersey, Mr. Kelly told participants that Mr. Cohn would lead the meeting. But Mr. Trump, whose most cutting insult is to pretend someone does not exist or that he barely knows them, virtually ignored him.

Here is what one prediction market says about the probabilities; note the movements going from Aug 24 to Aug 25 to today. 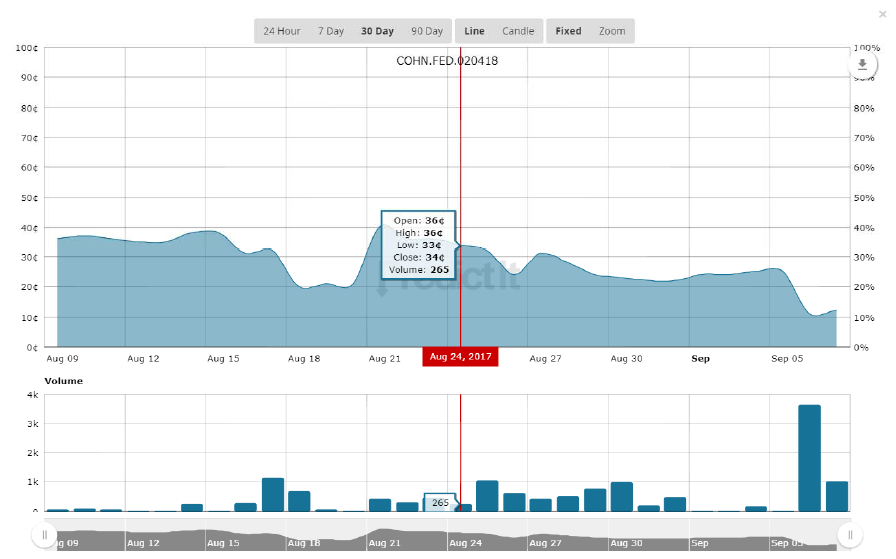 I’m not necessarily in favor or against Gary Cohn as Fed Chair, but what does the fact that views on the presence of good people in the white supremacist movement inform the selection of economic technocrats say about the nature of governance in 2017 America?