I saw this Seattle Times article while visiting my hometown, and it struck me as relevant, as the Trump administration is now deporting veterans, willy nilly. From the article.

When the [Second World] war began, the United States government had not yet repealed the Chinese Exclusion Act of 1882, the nation’s first immigration ban on a specific ethnic group. The law severely limited Chinese immigrants from entering the country and becoming naturalized citizens for more than 60 years, until the end of 1943.

This meant that while up to 20,000 Chinese Americans served in the military during World War II, about 40% were not even granted citizenship, according to the Chinese-American World War II Veteran Congressional Gold Medal Act.

Turning to the present, Trump now deporting military veterans, in violation of federal rules. From a recent GAO report:

U.S. Immigration and Customs Enforcement (ICE) has developed policies for handling cases of noncitizen veterans who may be subject to removal from the United States, but does not consistently adhere to those policies, and does not consistently identify and track such veterans. When ICE agents and officers learn they have encountered a potentially removable veteran, ICE policies require them to take additional steps to proceed with the case. GAO found that ICE did not consistently follow its policies involving veterans who were placed in removal proceedings from fiscal years 2013 through 2018. Consistent implementation of its policies would help ICE better ensure that veterans receive appropriate levels of review before they are placed in removal proceedings. Additionally, ICE has not developed a policy to identify and document all military veterans it encounters during interviews, and in cases when agents and officers do learn they have encountered a veteran, ICE does not maintain complete electronic data. Therefore, ICE does not have reasonable assurance that it is consistently implementing its policies for handling veterans’ cases.

The moral and ethical bankruptcy of this administration is breathtaking.

Reader CoRev is unable to read text and graph in the introduction of a GAO Report, when he asserts the tendency to deport rises with the Trump administration. From CoRev:

Menzie’s TDS is getting out of hand: “Turning to the present, Trump now deporting military veterans, in violation of federal rules. From a recent GAO report: ” While the GAO REPORT actually says this: “…GAO found that ICE did not consistently follow its policies involving veterans who were placed in removal proceedings from fiscal years 2013 through 2018….” Obama’s administration accounts for 4 of those 6 years studied. That’s 2/3 of the time period for the math impaired. [bold emphasis added by CoRev]

USCIS made several changes to its military naturalization processes in response to or in tandem with DOD’s policy changes. First, in July 2017, USCIS determined that the completion of DOD background checks was relevant to MAVNI recruits’ eligibility for naturalization. USCIS thus began requiring currently-serving MAVNI recruits seeking military naturalization to complete all required DOD background checks before USCIS interviewed them, approved their applications, or administered the Oath of Allegiance to naturalize them.47 Second, in January 2018, USCIS ended its initiative to naturalize new enlistees at basic training sites. This initiative, known as the “Naturalization at Basic Training Initiative”, began in August 2009 as an effort to conduct outreach to new enlistees at the Army’s five basic training sites and provide noncitizen enlistees an opportunity to naturalize prior to completion of basic training. Because of DOD’s October 2017 policy change increasing the amount of time noncitizens must serve before they are eligible for a characterization of service determination, noncitizen service members no longer meet the requirements for naturalization while they are completing basic training. As a result, USCIS closed naturalization offices in Fort Sill, Fort Benning, and Fort Jackson.

I.e., the Trump administration made steps to enhance procedural barriers in order to reduce the flow through this channel. I also add a graph that GAO thought sufficiently important to place in the summary. 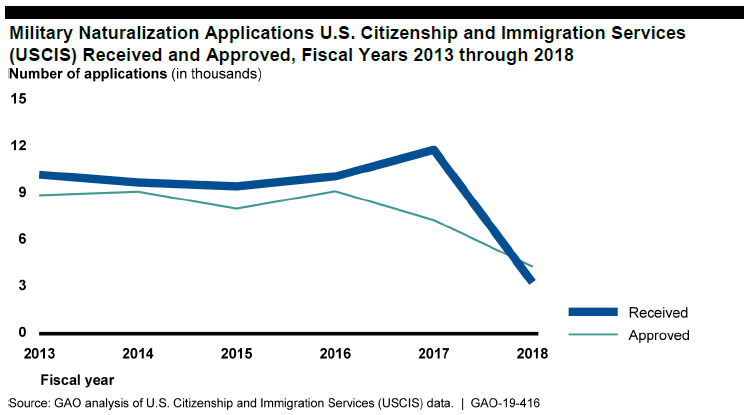 Unless you are a fool, an apologist, or both.

Update, 1:45PM Pacific: If you think it’s all coincidence, you might want to consider the following:

I think CoRev should just be honest: he/she wants immigration restricted, even those who serve in the armed forces (although he/she might be willing to give a waiver to Norwegians serving in the US armed forces).