The Trump economic policy regime (if it can be called that) has provided several “natural experiments”. Do corporate tax rate reductions “pay for themselves”? Does expansionary fiscal policy at full employment lead to large increases in output? Does increasing trade protection necessarily lead to an increase in the trade balance? Does a bellicose and confused trade negotiating stance accelerate fixed investment? I think the answers are No, No, No, and No. On this last point, see Altig et al. on Macroblog:

Amid reports of softening manufacturing conditions in the U.S., slowing growth in payroll employment, and a drop-off in business investment, it’s natural to wonder whether trade policy is at least partly to blame. Professional forecasters seem to think so. For instance, the International Monetary Fund (IMF) forecasts that the U.S.-China trade dispute will shave roughly three-fourths of a percent from global output by 2020, which, as the IMF’s managing director noted, is “equivalent to the whole economy of Switzerland.”

Over the past year and a half, we have been keenly interested in how trade policy worries affect business decision making. In August 2018, we reported that trade concerns prompted about 1 in 5 firms to re-evaluate their capital investment decisions. At the same time, only 6 percent of the firms in our sample had then decided to cut or defer previously planned capital expenditures in response to trade policy developments. Early this year, we noted that the hit to aggregate investment from trade tensions and tariff worries was modest in 2018, but firms believed the impact would increase in 2019.

Twelve percent of surveyed firms reported cutting or postponing capital expenditures in the first six months of 2019 because of trade tensions and tariff worries (see exhibit 1). That’s twice the share when we asked the same question a year earlier. Given the capital-intensive nature of manufacturing, it is perhaps more concerning that one in five manufacturing firms now report cutting or postponing capital expenditures because of trade policy tensions.

Here is an interesting correlation which is supportive of Altig et al.’s views. 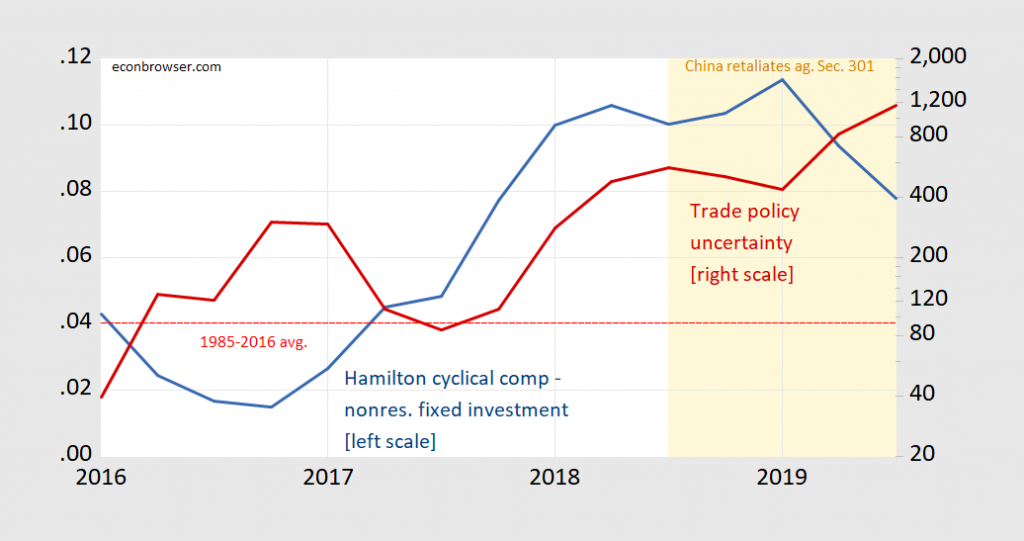 Note that trade policy uncertainty as measured by Baker, Bloom and Davis rose substantially above the 1985-2016 average in the first quarter of 2018, when Mr. Trump declared his intent to impose sanctions under Section 232 and Section 301. 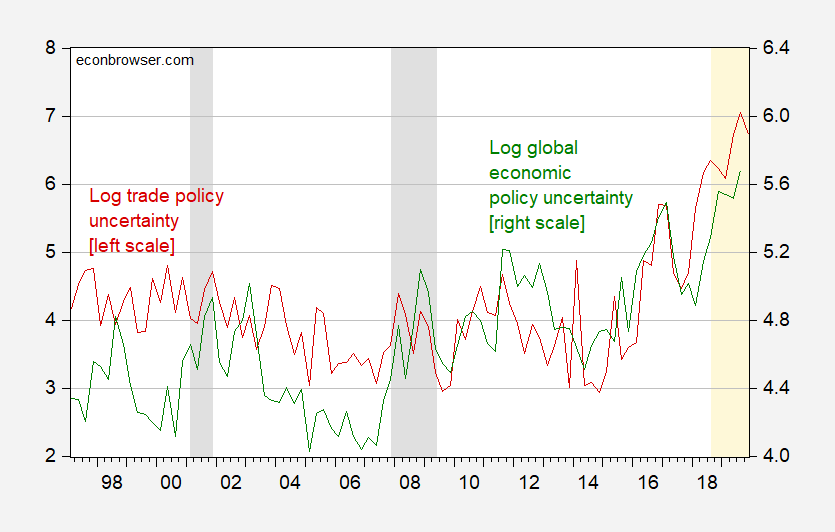 If you want to scare yourself, plot the trade policy uncertainty index unlogged…

21 thoughts on “The Trumpian World as Natural Experiment”