For instance, Goldman Sachs presents two forecasts for Q2 growth (SAAR): one for advance, and one for final. As of 7/19, the forecast of the advance release was -29.0%, and final was -33.0% (Seasonally Adjusted at Annual Rates, SAAR). Something to remember when contemplating the near future. 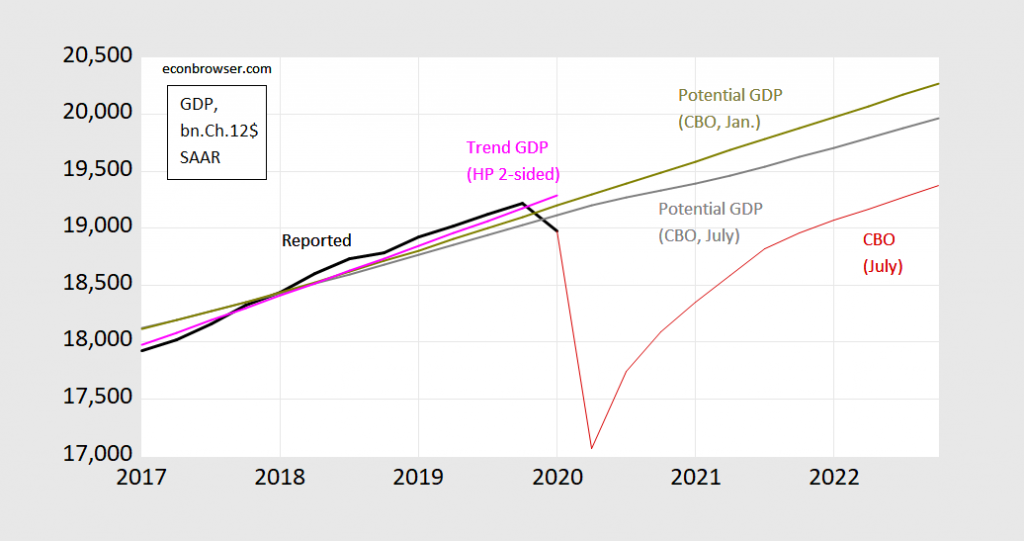 In other words, not only is potential GDP an estimate; so too, to varying degrees, are all the GDP figures associated with each release (advance, 2nd, 3rd). It’s just that usually, the revisions are expected to be relatively small. This is not the case as the recession deepened after Lehman Brothers collapsed, and not the case for 2020Q2.

In a recent SF Fed Economic Letter, Òscar Jordà, Noah Kouchekinia, Colton Merrill, and Tatevik Sekhposyan (“The Fog of Numbers”) provide some guidance on what to expect going from the advance release to subsequent, relying upon a familiar macro-relationship, Okun’s Law, which all economics undergrads learn. They show that particularly when the GDP growth rate is negative, revisions are more predictable, as shown below. 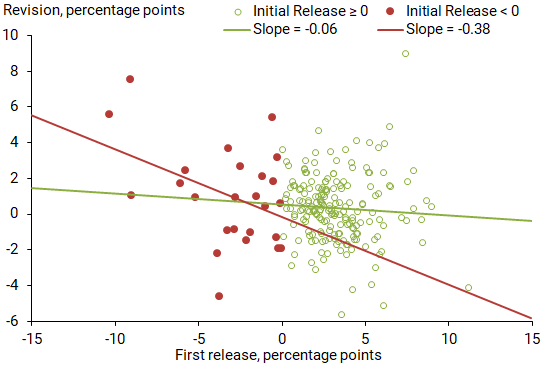 However, there is also a relationship to changes in unemployment. As the authors note:

It is generally difficult to predict revisions in real time, partly because any information that one could use to predict revisions is also available to the statistical agencies that are mandated to produce such data. We find this holds true: there is limited scope to improve on the advance release—the BEA does its job very well. However, some economic relationships appear to hold true more precisely with revised data than with the advance release of real GDP growth. One such relationship is Okun’s law, which suggests that real GDP growth will decline about 2 percentage points for each percentage point increase in the unemployment rate.

Our model based on these three components contains useful guidelines for what may happen in the second quarter of 2020 and beyond. We find that changes in the unemployment rate amplify the revision. For every percentage point increase in the unemployment rate in a quarter, the model suggests that GDP growth will eventually be revised down by 1.7 percentage points. On the other hand, a 1 percentage point decline in the advance release of GDP growth is associated with a subsequent ½ percentage point increase of final GDP growth. Thus, these two components pull real GDP growth revisions in opposite directions. Why? The more the advance release of GDP growth diverges from what Okun’s law predicts, the more tension that exists between these two components. The revision will reflect this tension.

In addition, we find robust evidence of seasonality in the revisions. Second quarter revisions are typically positive, amounting to about 1 percentage point increase in the most current vintage of the data relative to the advance estimate. Although our model explains only 16% of the variation for all data revisions, its ability to explain the data more than doubles to about 35% when the advance estimate of real GDP growth is negative.

This implies that we should expect revisions of the following sort: 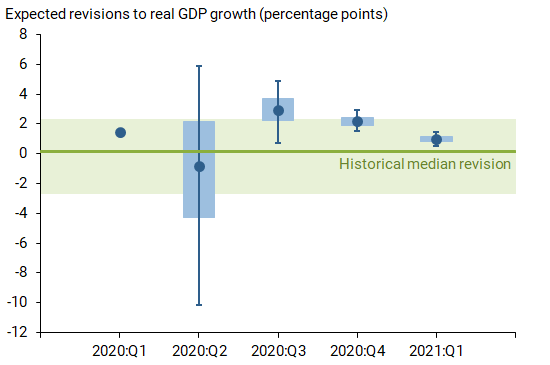 For a discussion of the importance of data revisions, see this 2019 post.

31 thoughts on “A Reminder: The Advance Estimate of Q2 GDP Growth Is…an Estimate”