Round 6 results of the FiveThirtyEight/IGM COVID-19 Economic Outlook Survey Series is out. Fivethirtyeight characterizes the results:

According to leading economists, that’s what’s likely in store for the U.S. economy this year if Congress doesn’t renew any of the $600-per-week supplementary payment for unemployed workers by Sept. 1. …

My assessment, taking into account the generally upward revisions in expectations, is included in the article:

But even their revised predictions are still pretty gloomy. “Remember that 10 percent used to be the depths of a severe recession, and other measures of the labor market like participation and underemployment are still very bad,” Wright added.

So while the July jobs report might have seemed, on the surface, to deliver good news, the survey makes clear that there is plenty that could keep us in the economic doldrums for the foreseeable future — particularly if Congress doesn’t act at some point soon. Menzie Chinn, an economist at the University of Madison-Wisconsin, said the July jobs report only confirmed his suspicion that the economic recovery was starting to plateau. Now, he thinks a W-shaped recovery — where the economy improves somewhat, only to crash again — is still possible, and “a stall is more and more likely.”

What are the perceived risk factors? The poll results are all here. 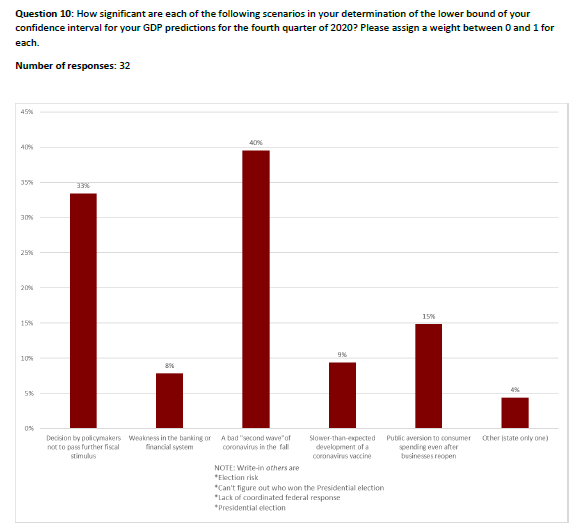 Notice the possibility of no significant Phase 4 bill figures substantially as a downside risk (I listed as the biggest risk).

40 thoughts on “Teetering on the Precipice (Still)”