In the year following the passage of the TCJA, U.S. business investment grew strongly  compared to pre-TCJA forecasts and outperformed investment growth in other major  advanced economies.

Evidence suggests that the overriding factor supporting that growth has been the strength of  U.S. aggregate demand, likely propelled by higher disposable household income or wealth  gains due to the tax cuts and the government spending stimulus from the BBA which occurred simultaneously. While the increase in business investment is undoubtedly positive for economic activity as it increases capital stock and supports productive capacity, the  aggregate demand boost could fade as the spending bill and personal income tax cuts expire.

Investment growth in 2018 was also below predictions based on the historical relation  between tax cuts and investment as identified by a range of studies in the empirical  literature.  We estimate that policy uncertainty and, especially, the stronger corporate market  power compared to previous postwar episodes of tax policy changes reduced the relative  impact of the TCJA on business investment. The rise in corporate market power can account for a large part of the observed gap, offering a new explanation for why investment has not been stronger. Once these two factors are accounted for, other factors appear to have played a limited role (or their effects may have offset one another).

Our results suggest that in an environment of rising market power, corporate tax cuts become less effective at raising investment. They also support the notion that reducing economic  policy uncertainty could result in further growth in business investment.

which is estimated over the 1983Q4-2016Q4 period. Then investment is forecasted out-of-sample using Consensus Forecasts of GDP for changes in income (this is also known as an ex post historical simulation). This results are shown in Figure 6: 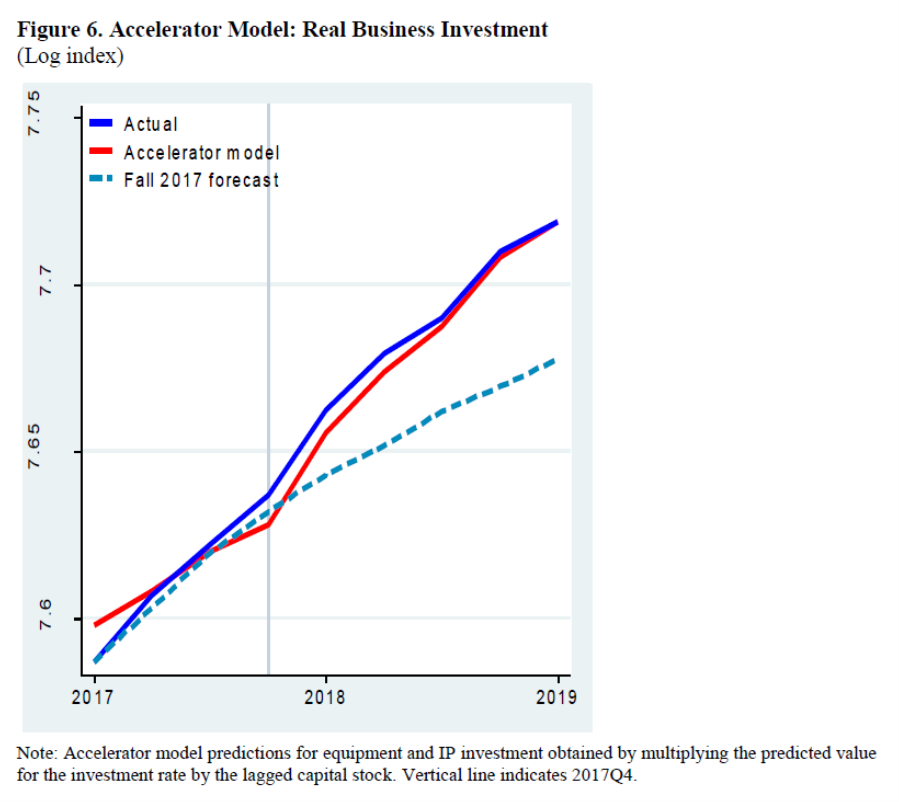 The fact that ex post investment (ex-structures) is only slightly above the simulated values suggests that the impact of the Tax Cuts and Jobs Act via the changes in the user cost of capital is minimal (although aggregate demand effects coming from personal income tax cuts might have been important).

[The accelerator vs. neoclassical vs. other models of investment, discussed in this post.]

If firms did not devote increased cash flow to capital investment, what did they do? Figure 8 explains it all. 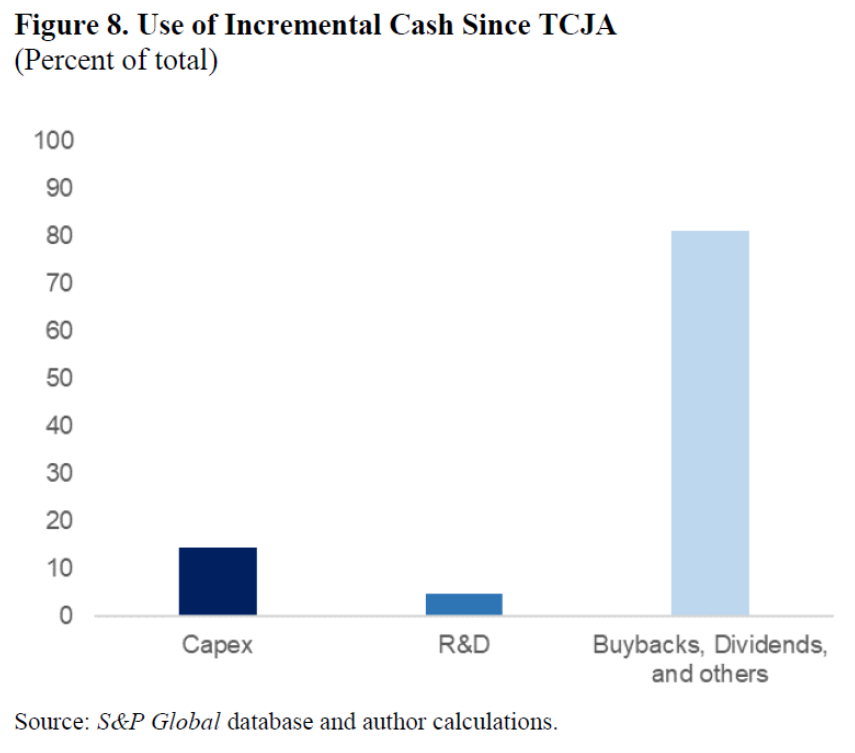 Second, the largest effects occurred in the first and second quarters of 2018, which allowed very little time to be the result of investments that must be planned in advance (even if the tax cut was anticipated in late 2017). Furthermore, structures growth rates were negative in the last two quarters.

Third, real growth in the subcategories of equipment, structures, and intellectual property products is inconsistent with the incentive effects of the tax change. Over the entire year, intellectual property products grew at the fastest rate (7.7%), equipment at a slightly lower rate (7.5%), and structures at 5.0%. To assess the incentive effects of the tax changes (which included a lower tax rate and faster depreciation for equipment), consider the change in the user cost of capital (or rental price of capital). It is the equivalent of the “price” of capital as an input (just as the wage is the price of labor input). It includes two costs of using capital: the opportunity cost of using funds (i.e., the required pretax rate of return on the asset) and depreciation (i.e., the cost of using up the asset). The user cost reflects the required rate of return at the margin (i.e., for an investment that earns just enough to be worth making). Estimates indicate that the user cost of capital for equipment declined by 2.7% and the user cost of structures declined by 11.7%, but the user cost of R&D (intellectual property products) increased by 3.4%. (See the Appendix for details on the derivation of these results.) The user cost of capital for equipment declined by less.

On the other side, Heritage presents its argument that the TCJA spurred investment here. Adam Michel tries to explain the 2018 decline in investment by appealing to economic policy uncertainty. The Kopp et al. argue that the decline attributable to economic policy uncertainty (as measured by the Baker, Bloom and Davis index) is modest relative to the implied increase in investment predicted by the models they examine.

PS: The Kopp et al. paper ascribes some of the decline in investment sensitivity to the user cost of capital to increasing corporate monopoly power. There is a citation to Krugman (2018) as an early proponent of the thesis of increasing monopoly power dampening the impact of corporate tax rate reductions. To wit:

Also, a substantial fraction of corporate profits really represents rewards to monopoly power, not returns on investment — and cutting taxes on monopoly profits is a pure giveaway, offering no reason to invest or hire.

66 thoughts on “When (US) Corporate Tax Rate Reductions Last Bloomed”