The President has stated a new lockdown is unlikely, but even if there is no new Federal measure, risk aversion on the part of the vulnerable might slow economic activity. (Of course, those who actively resist getting vaccinated might not be risk averse, and just go on about their business, mitigating this effect). Since vaccination rates are variable, the impact would likely be geographically concentrated.

As Ashish Jha, Dean of Brown’s school of public health, noted in NYT:

“People who have been vaccinated still do quite well against this variant,” Dr. Jha said, “but it is one where you need a high degree of immunity to ward off, so you really need to have both of your doses of your vaccine.”

Below, I show a map of fully vaccinated rates. 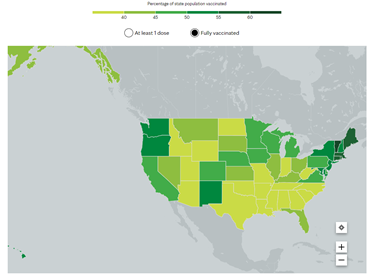 The GDP accounted for by these states with less than 40% state population vaccinated is 28.6% of total US GDP in 2019Q4 (the NBER business cycle peak quarter).

More from Bloomberg on Gamma as well as Delta variants, and rapid spread in under-vaccinated counties.

60 thoughts on “The Delta Variant and Prospects for Economic Activity”